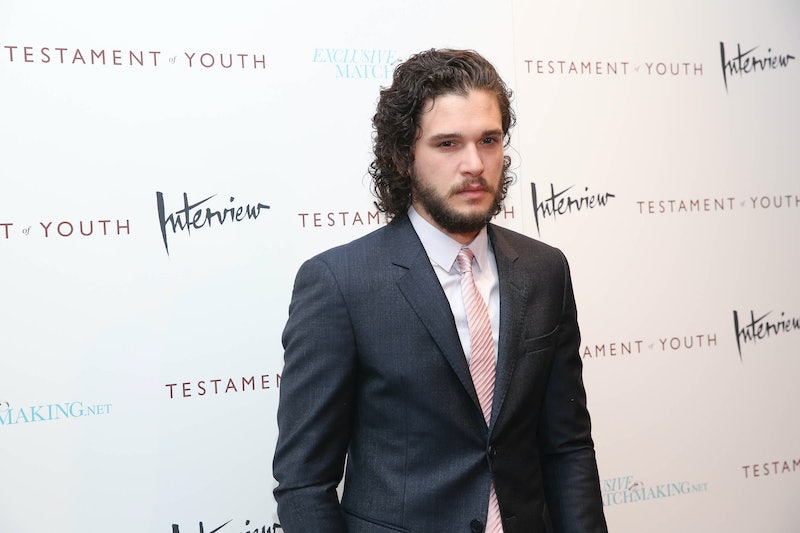 It looks like Kit Harington may have finally dropped the act and stopped pretending like Jon Snow's not returning to Game Of Thrones for Season 6 — about time! In an interview with the Dutch-language TV magazine Humo (that was translated by a helpful superfan on Reddit), Harington reportedly spilled the beans and revealed that he now knows "exactly how long" he is "still under contract" with the HBO show — and that he will "probably be in his 30's when it's over." Even a writer like me can do that math: Harington is turning 28 in December, so, if this is true, that means there's likely a few more years of Harington on Game Of Thrones. If this is truly the case, I've gotta say, I'm not surprised — but it's good to hear it from the saddest Lord Commander there ever was himself, since we've heard about Jon Snow's fate from just about everyone else in and out of Westeros.

In the Humo interview, in which he was promoting Testament Of Youth, Harington reportedly said:

Harington: […] I often felt frustrated as well. I had to pass on amazing parts because I was attached to Game of Thrones. So the show is like a [double-edged] sword to me: I owe a lot to it, but at the same time it has almost completely drained me. Oh well, I try not to think about it too much. The important thing is that I now know exactly how long I am still under contract, and in the meantime—

Humo: How many more seasons would that be?

Harington: Nice try [laughs]. I can’t talk about that. Let’s just say that Game of Thrones will remain a part of my life for a while, I’ll probably be in my thirties when it’s over. One thing’s for sure: the day I’m no longer on Thrones is the day I’ll bury myself in movie projects [laughs].

This is the most conclusive evidence fans have received so far, besides the fact that Harington still hasn't cut his hair. But, if Jon is indeed coming how, how will he return? After his horrific and untimely death at the end of Season 5, fan theories concerning his possible resurrection range from plausible and likely probable — like Melisandre resurrecting Jon Snow from the dead to fulfill the Azor Ahai prophecy — to the absurd, like one that suggests Jon Snow could become the Night's King. No surprise that there are so many theories, though — it's a long time until Season 6, and if there's one thing the Internet loves to do whilst biding tie it's theorize.

Even those affiliated with the series have their theories. Though showrunner Michael Lombardo insisted back in July that Jon Snow was, and I quote, "dead, dead, dead," Clarice Van Houten (who plays Melisandre) said during the London Film and Comic Con in July that there was absolutely no WAY that Jon Snow could be dead, while Emilia Clarke (aka Daenerys Targaryen aka the Mother of Dragons) said in a June interview with MTV that there was a 50/50 chance that Jon Snow is still alive. On the other side of the spectrum, John Bradley — who plays Jon Snow's buddy ol' pal Samwell Tarly — told the Huffington Post he thinks that Jon Snow is gone for good.

So, is Lombardo lying to us? It's possible that Jon Snow could come back in flashbacks, since we know that Game Of Thrones is now officially pro-flashback scene: After all,we met a young Cersei in Season 5, and will see a young Ned Stark in Season 6. Whatever the case, I'm just happy for the hope that Jon could really be returning — no matter in what way. I'll take any Jon Snow I can get!