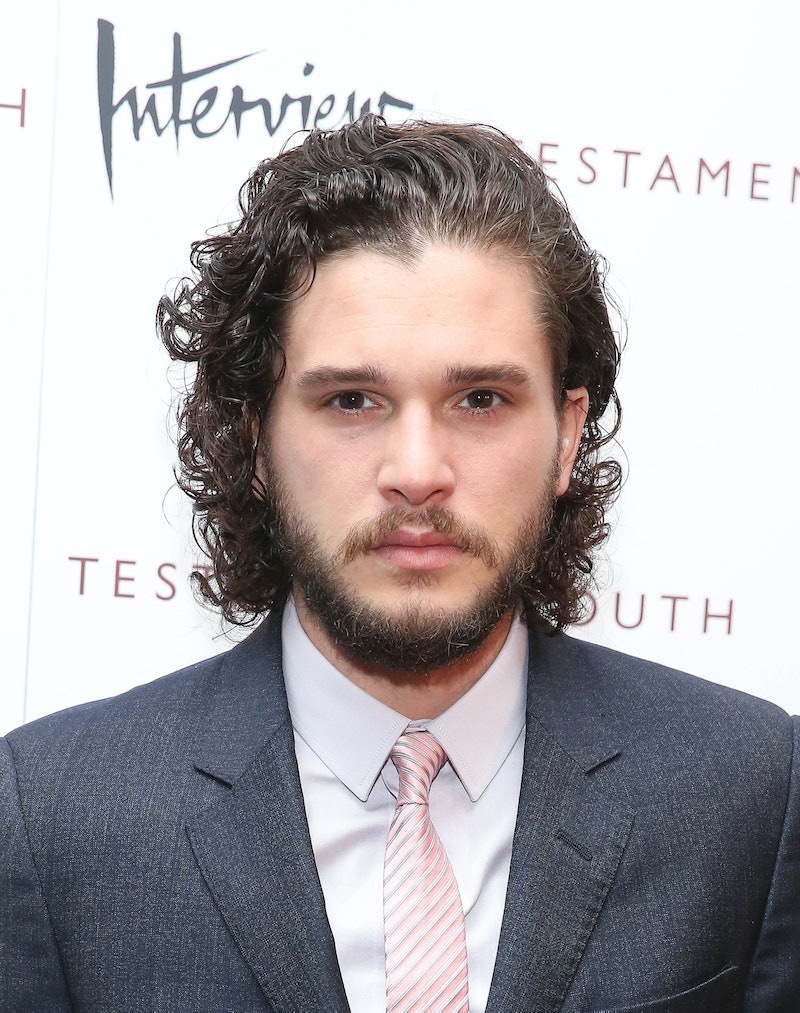 Unless you've been living under a rock since the Game Of Thrones Season 5 finale, it's likely you're aware of the massive amount of speculation surrounding the fate of Jon Snow. However, fespite how much series producers have sworn that Jon is deader than dead, it looks like that might not be the case — and that actor Kit Harington's alleged quote about not being through with Game Of Thrones for at least a few more years might be true — if there's any truth to these photos. The Daily Mail seems to have obtained photographic evidence of a man who looks a lot like Kit Harington in Jon Snow garb on the Game Of Thrones.

There have been so many rumors floating around about whether Snow is alive or dead that it's difficult to take any new rumor seriously — but these pictures seem like the most promising evidence so far. That being said, Snow hasn't been the only brooding swarthy guy on the show so far, so it's more than possible that there's just another character with a penchant for man buns on set. Or, maybe it's some kind of Jon Snow doppelgänger. Or a ghost.

Those who have gotten confused about Jon Snow and why it's so difficult to figure out whether he's alive or not should not feel embarrassed; it has been really confusing. In the Season 5 finale, Jon Snow was stabbed and left for dead by the Night's Watch. While some people, including HBO programming chief Michael Lombardo, have insisted that he is dead, others — including Harington himself — have kept audiences hopeful with encouragingly vague hints about contracts and possibilities. Now, this picture instills more hope that he might be returning (though, it's worth noting, that doesn't necessarily mean he didn't die) — but you can judge for yourself:

Assuming that that familiar build, bun, and expression is Jon Snow, here are some other things that this picture hints about the new season of GoT.

Jon's Back At Winterfell

Since they did betray him, maybe Snow has abandoned his Night's Watch uniform for the uniform of his family the Starks. Could he be leading what remains of the Starks in some kind of resistance?

There Was Magic Involved

Snow appears unscathed, which is a remarkably quick recovery from all those stab wounds. Too quick, in fact...

It has been rumored that Melisandre's powers could resurrect Jon — and the lady under the umbrella could easily be The Red Witch.

It Isn't A Flashback

If that is indeed Melisandre, then this scene wouldn't be a flashback because Snow has never been in his Stark uniform around Melisandre.

He Has A New Sword

Snow's old sword Longclaw was given to him by Night's Watch commander Jeor Mormont, but USA Today points out that the one on his hip looks a little lighter than that. It would make sense, since Snow is not a fan of the Watch after their stabbing of him.

He's Not A White Walker

Since he does not appear to be a creepy white frozen corpse.

He Hasn't Learned That Man Buns Cause Baldness

The fact that Snow is sticking to his signature style suggests that he has not seen the study that man buns can cause acute baldness along the hairline.

Whether or not you think this picture proves anything, or even depicts Jon Snow, I'm sure whatever Game of Thrones chooses to do will come as a surprise. We'll probably have to wait until the spring to find out — after winter has come and gone.