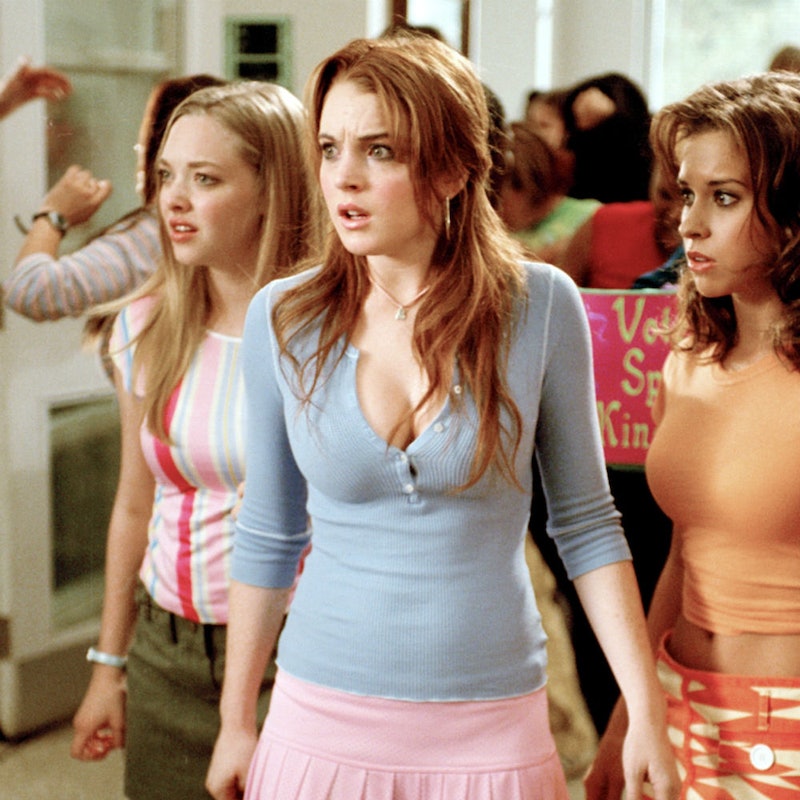 I'm a sucker for teen movies — even now, when my teenage years are more than a decade behind me. I don't know what it is about them. Maybe just that they remind me of simpler times (albeit sometimes more torturous ones, when it comes to high school), when my biggest worry was whether I was going to get invited to Melissa Johnson's birthday party. Either way, Mean Girls holds a special place in my heart, despite the fact that I was already 20 when it came out and my high school days were blissfully behind me. There was just something so hilarious and ridiculously true about the whole thing.

Sure, Regina George was an extreme characterization of the high school clique leader, but somehow it all made sense. In fact, she was kind of my favorite character, as loathe as I am to admit it, because something in her just resonated with me — though not literally, don't worry. Maybe it's the Aries in me. We're prone to histrionics sometimes, aren't we?

Whoever your favorite Mean Girls character is, you were likely drawn to him or her because you saw something of your own experience in them — or maybe something of what you wish you were back then. Plus, whether you really believe in horoscopes or astrology, there's something about our zodiac signs which dictates the type of people we are, and the types of people we surround ourselves with. If you wonder who your perfect Mean Girls character match is based on your star sign, then look no further!

Sure, Regina was nuts, but she was also passionate. She often let her emotions get the better of her, making her extremely stubborn and hot-headed. She would stop at nothing to get what she wanted, and wouldn't take no for an answer. Obviously, in real life we tend to be a bit more balanced, but can you think of any better description of an Aries?

Those born under Taurus are incredibly smart and very similar to Aries — of course, they're just quieter about it, and tend to internalize things and process them on their own. However, they can eventually explode from holding so much in, which is never a good thing. Janis Ian feels your pain, Taurus folks.

Geminis are known as "the twins," meaning they often seem to be two different people at once. Regina's mom, played so wonderfully by Amy Poehler, fit the bill perfectly. She was a mom, but she was the "cool mom" who was desperate to retain some of her own glory days by living vicariously through her daughter.

Cancers tend to be quite pragmatic and focused on living a balanced life, complete with all the creature comforts of home and family. Mrs. Norbury may have been going through some crap in her personal life, but all she really wanted was a calm existence. Cady messed that up for her, but Cancers are forgiving, so it's all good.

Leos tend to be a bit intense, and very vocal about sharing their opinions. While Gretchen had to keep quiet under Regina's reign, she just couldn't help herself, and had to find ways to share her true feelings with others — though this was usually to her own detriment.

Virgos are naturally charming, and find it enjoyable to tell tall tales and make up ridiculously outrageous stories about impossible occurrences, which others find themselves believing due to the aforementioned charm. Karen probably made you think she really COULD tell whether it's raining with her boobs, right?

Libras value justice and equality over all else, and it makes perfect sense that Principal Duvall is the right match for the sign. All he wants is for his school to run efficiently and with as little trouble as possible. After all, he did NOT leave South Central for this!

If you want to be around someone who's sure to be the life of the party, hang out with a Scorpio. Damian is extroverted to the extreme, full of camp and bravado, and he's an all-around absolute delight. Sounds like a Scorpio to me!

Sagittarius-born people are pretty philosophical, and also incredibly resilient. They aren't likely to take being knocked back to heart, and instead they come back fighting and refuse to accept defeat, which often works out to their advantage. Think of Kevin and his rap career (and his crush on Janice). He absolutely killed it in the end, even if no one would have believed he would.

Capricorns tend to be somewhat introverted and self-sufficient, but they're also friendly and down-to-earth, and because of this, they end up being extremely well liked by those around them. Four for you, Glenn Cocco!

Those born under Aquarius tend to be low-key and unassuming, but that doesn't mean they're wallflowers in any way. Aaron Samuels didn't make a big to-do about his handsomeness, but that didn't keep Cady (and Regina, of course) from seeing it.

Pisces can sometimes battle a lack of self-confidence, as they're highly sensitive to how they're perceived by others, because at the root of things, they just want to be loved. Cady fits the bill perfectly. And speaking from experience, Pisces are one of the best signs around, so if you meet one, hold onto them.