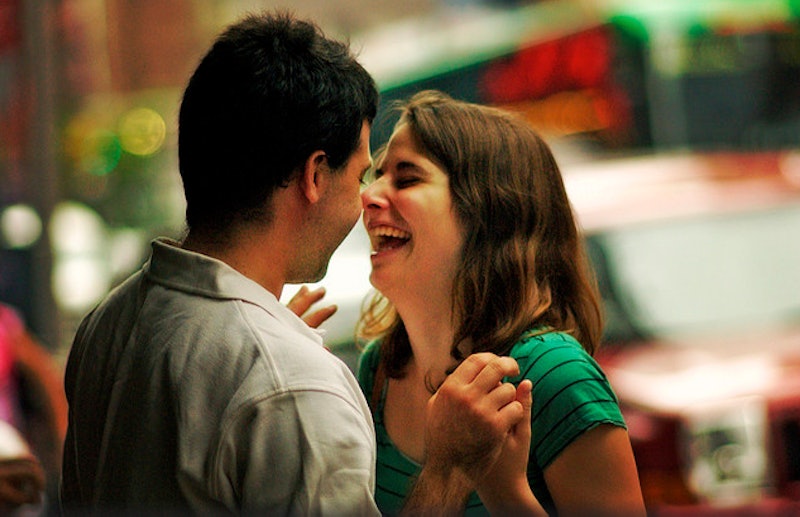 Although I’m a skeptic myself, I have lots of friends who are completely transfixed by the study of astrology. I always know when Mercury is in retrograde, because my Facebook feed is bombarded with, “OMG! Everything is falling apart, because of Mercury retrograde!” Because I’m neurotic enough as it is, I tend to steer clear of most astrological life advice. But, admittedly, I’ve always been sort of curious about the dating compatibility aspect of astrology.

As a Libra who has dated more Geminis than any other signs, I can't help but think this whole astrological thing that so many other people so gung-ho about might have something to it. Although, despite having dated so many Geminis, the man I married is an Aquarius, so... maybe not. (Tragically, according to the stars, he and I will not have “perfect sex.” Well, that is just awful news, but I will do my best to get over it.)

Here's who you should be dating, according to the stars.

According to astrologist Susan Miller, this is an ideal match, because of the emotional connection between the two signs. But beware: things can get tricky is in the bedroom, because Libra likes to take it slow, while Aries goes in for the kill. If Aries can remember that foreplay is really important to Libra, then they're unstoppable.

It may seem strange that two bulls, who are known to be stubborn as hell, would make for a great partnership — but maybe it's because no one else really gets them. When two Taurus come together, it makes for a both a stable and sensuous union. Apparently, it's the "love connection of a lifetime," because they're both in sync on what matters most: fidelity and food.

Here there is not only mutual understanding, but also a shared appreciation of all things beautiful; like art, music, and culture. Neither sign is naturally jealous, so there's no concern for unnecessary drama. The openness between a Gemini and Libra is something that will apparently "stand the test of time."

Although the thought of dating a Scorpio can be scary (because they tend to not get along with many signs) in Cancer, Scorpio finds a home. They're a good balance for each other's insecurities and neuroses, and Scorpio is great at breaking down Cancer's shyness. They help each other with their hangups.

With these two, the fun never stops. Each one is always up for a good time, trying something new, and encouraging each other along the way. But for Leo and Sagittarius, their favorite way to spend time together is in the bedroom. They also tend to view the world the same way, often agreeing on political and social issues, which is obviously really important.

The introverted and reclusive nature found in both Virgo and Taurus means they're both more than happy to stay home together. They're comfortable doing their own thing, one-on-one, and are basically Netflix's ideal customers, because there's probably a lot of TV watching going on there.

Once again, Libra and Gemini are a good fit. They intellectually challenge each other, agree on social issues, and are not jealous people.

But the runner-up match here for Libra is actually another Libra, because we tend to be that self-absorbed. We also understand each other's bossiness and need for balance.

Scorpio and Pisces perfectly sum up the whole "opposites attract" concept. They may be different in many ways, but they're also similar in their dependency on each other. Scorpio is naturally possessive, and Pisces needs that for their self-worth.

The combination of creativity and need for adventure is paired very well when Sagittarius and Aquarius get together. Since they're both talkers, they can have endless discussions, and their sex life is both active and "innovative." Sounds like fun, you two!

As Astrology Companion puts it, you guys are like two peas in a pod. You both love order, and strive for success. You also keep your friend count to a minimum, because who needs to be friends with everyone? While your sex life will sometimes take some work, this partnership is based on practicality and has a high chance for longevity.

Oh! Such a cheery union! When Aquarius and Sagittarius come together, it's a roller coaster of energy of two people who are up for anything. But while they're having all that fun, they like to do it with lots of other people and in a way that will make the world a better place — all while keeping their eye on the future. They both aren't afraid to have big dreams, and support each other in achieving them.

Again, this is a situation where the opposite aspects of two signs really play in a couple's favor. Pisces is imaginative, while Capricorn is laid back enough to do just about anything Pisces throws at them. Because Pisces can be sort of flighty, Capricorn brings them back down to earth, but would never even think of changing them.

More like this
Why A Libra & Libra Couple Might Become Codependent
By Kristine Fellizar
Libra & Aquarius Can Be Great Together, As Long As They Do One Thing
By Kristine Fellizar
Why Harry Styles & Olivia Wilde Make A Great Couple, According To Astrology
By Nina Kahn
Think Your Partner Is Cheating? These Tarot Cards May Confirm Your Suspicions
By Kristine Fellizar
Get Even More From Bustle — Sign Up For The Newsletter