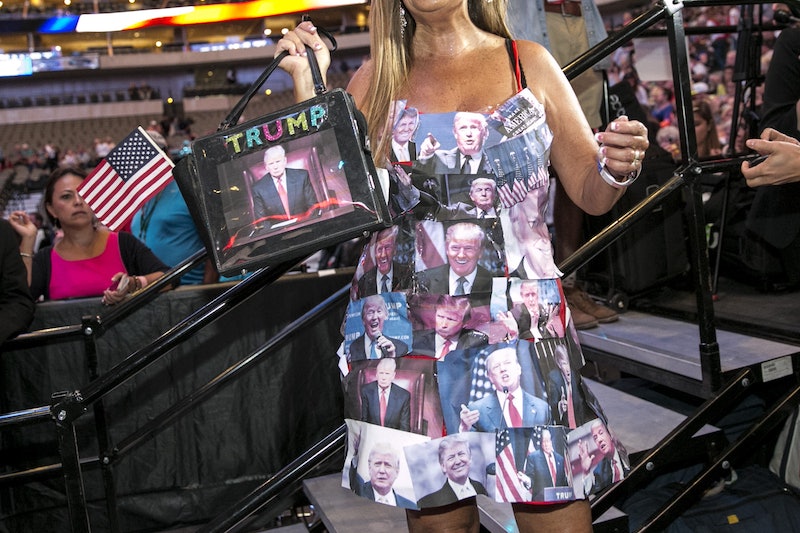 It's no secret Donald Trump wants to "make America great again." He's blanketed almost every news outlet with his unconventional tax plan, his unfortunate comments about immigrants and women, and his vast knowledge of the latest polls. To be honest, I don't think a vote for Trump will necessarily make America great, but a funny Donald Trump Halloween costume could certainly make the end of October great.

Trump has, arguably, turned more attention to a presidential election than there has ever been before thanks to his bold statements and domineering stage presence. It also seems like he has turned a fair share of attention on to Halloween already, too. There's a sexy Trump costume — named Donna T. Rumpshaker — circulating the Internet. It features Trump's traditional navy blue suit and red tie, only the suit comes with booty shorts where there should be properly tailored pants. It's an interesting take on the word "sexy," and it's unfortunately ironic considering Trump's sexist comments toward women. (I almost hate to think what Trump would say if he encountered a young woman wearing this costume on Halloween.)

Fortunately, there are better ways to dress like Trump for Halloween, whether you want to make fun of him or just be plain funny. For almost all of these, you'll want to start with the now-famous Trump wig (which you can buy online for less than $20) and a "Make America Great Again" hat. Pro tip: To get your red hat without supporting officially supporting Trump's campaign, try going DIY it with a plain red hat and some fabric paint.

1. Donald Trump With A Man Bun

If you hadn't seen this picture yet, then I apologize for burning it into your brain. Trump's hair has made quite an impression on Americans — even before he launched his presidential campaign — but this costume takes the Trump wig to another level.

It's pretty self-explanatory from here, but simply don the wig and pull the hair into a bun near the top of your head. Secure it with that black hair tie you probably have around your wrist at all times.

Back in September, Trump and Jimmy Fallon poked fun at Trump's ego in this sketch for The Tonight Show. Fallon is an expert at dressing up as and impersonating Trump — for this sketch, he even had the accent and the posture down pat. Channel your inner Fallon (because nobody should have an inner Trump to channel) for this simple yet funny costume.

Ideally, you'd carry around a dressing-room-type mirror with the bulb lights, but since that's a little unrealistic, you can compromise with a smaller mirror. If you want to get especially crafty, you could make your own fake mirror by making a square frame from a large piece of cardboard or poster board and placing yellow circles around it to resemble the lights. Bonus points if you make this into a couple's costume, with both of you dressed up like the Donald and standing face-to-face.

When it comes to Trump memes, there are no shortage to choose from. The trick is finding the one that works for you — a simple Google search should do the trick. You can also add your own creativity to the mix by coming up with your own meme text. The exact outfit you'll need depends on which meme you're going for. Fair warning, though: This costume does require a little DIY.

To make the meme text, you can print out the words you want to use and attach them to your clothes with tape or safety pins. If you're willing to put in a little more effort, you can make yourself an Instagram-type frame out of cardboard or poster board and attach your meme text to the frame. Either way, make sure to type your text out in Impact, the traditional meme font.

Since launching his campaign, Trump has made a point to talk about how "really rich" he is. (And thank goodness, because we wouldn't have known otherwise.) He claims it's a good thing because he will use his own money to fund his campaign as opposed to taking money from wealthy people who want to influence him. At this point, though, it's kind of overkill.

Wherever you celebrate on Halloween, walk around passing out the $100 bills and telling people how rich you are. If you've ever wanted to show off your uncanny Trump voice impersonation, add that in for an even better effect. One caveat: Please don't use this approach on young trick-or-treaters who just want a nice piece of candy.

5. Donald Trump On An Escalator

This costume is not for faint of heart. It requires dedication. It also requires the place you're spending Halloween to have a staircase... or for you to bring your own.

When you get to the Halloween party, greet your fans with firm handshakes as you make your way to the stairs. Once there, descend slowly and smoothly, as if you're descending an escalator, while waving gracefully and holding a thumbs up in the air. Repeat every time someone asks you what your costume is.

Remember, no Trump costume is complete without a shade-too-orange tan. Especially if you're going for funny (please don't go for sexy), it's important to stock up on that fake spray tan or bronzer.

More like this
15 Ways To Deal With A Toxic Family During The Holidays
By Gabrielle Moss and Carolyn Steber
32 Cheap Gifts For Your Bestie That Go Beyond Basic BFF Necklaces
By Emily Kelley, Mia Mercado and Brittany Leitner
How Long Does Leftover Stuffing Last? Here's When To Toss It
By Chelsey Grasso and Alexis Morillo
23 Genius Gifts To Get Someone You Don't Know Very Well
By Jessica Booth, Lauren Grant and Brittany Leitner
Get Even More From Bustle — Sign Up For The Newsletter