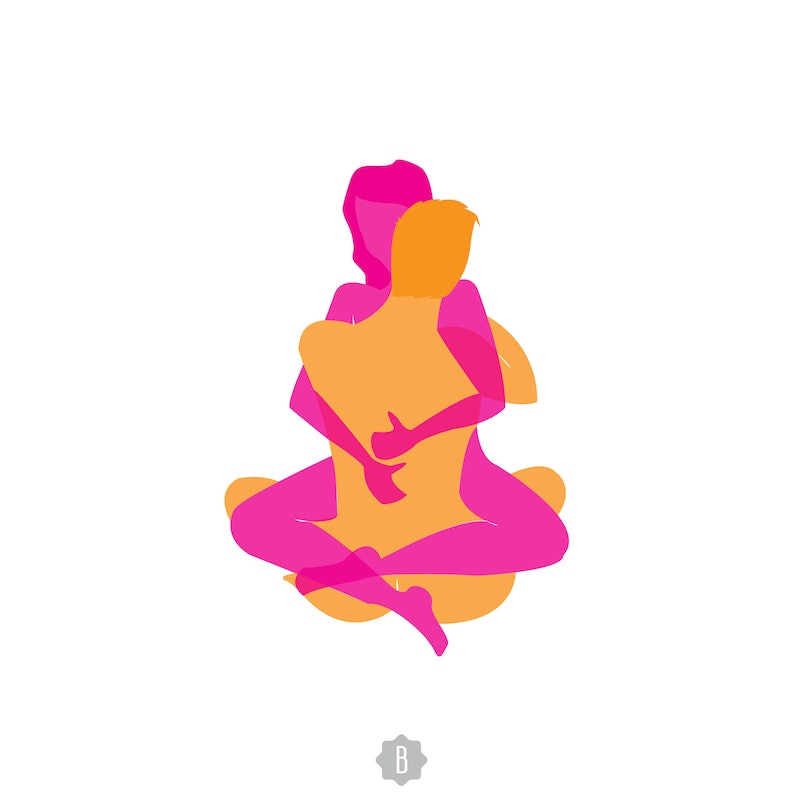 We’re always hearing that we could be having better sex, a better orgasm, or a better relationship. But how often do we hear the nitty-gritty of how we can actually better understand our deepest desires and most embarrassing questions? Bustle has enlisted Vanessa Marin, a sex therapist, to help us out with the details. No gender, sexual orientation, or question is off limits, and all questions remain anonymous. Now, on to today’s topic: the best sex positions for clitoral stimulation.

Here are six sex positions for incredible clitoral stimulation. (Note: I'll be using male and female pronouns here, but these could all also be achieved with two women as well!)

Assume The Position: Have him lie on his back. Straddle his pelvis, with one leg on either side. Rest on your knees, with your feet pointing back towards his. Sit up relatively straight, so that your bodies are perpendicular to each other. Rock your hips back and forth, or grind against him in small circles.

Get That Clit Stim: This position is great because it offers so many options for clitoral stimulation. If you try leaning forward a bit, your clitoris will slide up against his lower abdomen. (Pro tip: Put some lube on your clit so you get even more of a glidey sensation.) If it feels like you’re not getting enough stimulation that way, have him rest his thumb on his pubic bone to give you something to grind up against. If you stay more upright, you can very easily reach down and touch your clitoris, or have him stroke it for you.

This is also a great position for using a vibrating cock ring. Try the LELO Tor II or Je Joue Mio. Another super hot move is to pull his penis out of you, rest it against his belly, and grind your clitoris up against it. This little trick is guaranteed to please both of you!

Assume The Position: This position is pretty similar to Woman On Top, except you’re facing the other direction. He’s on his back again, but you want to turn your body so that your head faces his feet before you straddle him. Slowly lower down onto him, using your hand to guide him into you. The initial penetration can be a little trickier in Reverse Cowgirl, so you may want to use some lubricant to ease him in. This is a really hot position, so a slow, sexy grinding movement works well.

Assume The Position: The man is standing in this position, so you’ll need a flat, sturdy surface that is at pelvic level for him. A countertop, desk, or raised bed usually works well. If you can’t find anything high enough, you can use a bed or sofa and have him kneel instead of stand. He penetrates you, then you slowly lift your legs up and rest an ankle on each of his shoulders.

Assume The Position: Kneel on your sofa, facing the backrest. Rest your forearms on the back of the sofa. Your body will be upright, but slightly bent over. Your guy can kneel on the cushions behind you, or stand in front of the sofa. He enters you from behind. You can also do this position on a staircase. Just make sure to have some padding for your knees!

Assume The Position: Have him sit on the bed cross-legged or with his legs extended; whichever is easier for him. Straddle him, with one leg on either side of his hips, and lower down onto him. Wrap your arms around each other. You can’t do a ton of crazy thrusting in this position, so you want to focus on grinding against each other.

Get That Clit Stim: Try rocking your pelvis up and down, and see if you can get your clit to rub against his lower abdomen. Or reach your hand down and touch yourself.

Assume The Position: Have him lie on his back, with his knees up and his feet propped flat on the bed. Crouch over him, straddling one of his legs so that each of your legs is on either side of his thigh. Gently lower yourself to your knees, and use your hand to guide his penis inside of you. You’ll be facing his feet, but turned at an angle. Grind up and down against his thigh, almost as if you were trying to climb it!

More like this
What Mercury Retrograde Spring 2022 Means For Your Sign's Sex Life
By Nina Kahn
Help! My Partner Only Wants Sex Late At Night & Won’t Compromise
By Sophia Benoit
Ask A Sex Therapist: Is My Sex Fantasy Normal?
By Madison Malone Kircher
Please Respect Mia Khalifa’s Rebrand
By Charlotte Shane
Get Even More From Bustle — Sign Up For The Newsletter