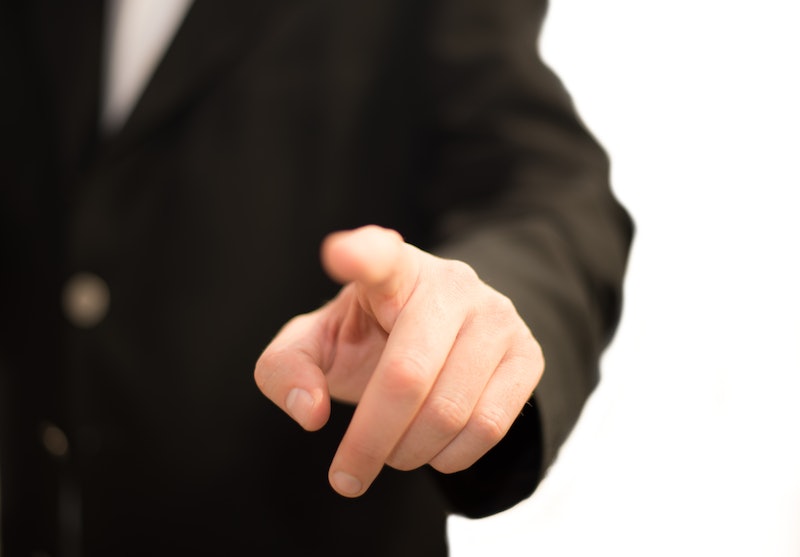 If you're a woman, a man has probably at some point explained something to you that you already knew — or that you had no use in knowing because it was completely irrelevant or simply wrong. But you may not have known how to respond to "mansplaining" — which is now enough of a household term that Google offers a definition when you type it into the search bar. While there are unfortunately no surefire ways to stop a mansplainer in his tracks, there are a number of tactics you can use in the event of mansplaining to mitigate the damage — or at least cut down on the irritation it causes you.

For the curious, the official definition of "mansplain" according to Google is, "(Of a man) explain (something) to someone, typically a woman, in a manner regarded as condescending or patronizing"; in context, it might be used in a sentence like, "I'm listening to a guy mansplain economics to his wife." But before the term was Google-able, Rebecca Solnit popularized it in the book Men Explain Things To Me, inspired by her own experience with a man who tried to explain a book she wrote to her.

Furthermore, while mansplaining is a gendered phenomenon, there exist a number of variations that involve other privileged groups speaking condescendingly to other underprivileged groups. For example, the Urban Dictionary defines "whitesplaining" as "the paternalistic lecture given by Whites toward a person of color defining what should and shouldn't be considered racist, while obliviously exhibiting their own racism."

If mansplaining, or any sort of "splaining," sends you into incoherent fits of rage, I don't blame you. But if you'd like to teach the mansplainers in your life a lesson, here are some suggestions for responding to six common types of mansplainers.

1. If: Someone Is Mansplaining To You Over The Internet...

If you're a woman who has written things on the Internet, you're more than likely to encounter these.

Try: ...Sending Them A Link To Men Explain Things To Me

Don't expect them to take the hint. But hey, at least you're giving them the opportunity to learn.

2. If: Someone Is Mansplaining To You About Your Own Lived Experience...

For example, some mansplainers try to tell women what it is like to be a woman, often to make a point about gender differences or to argue that gender equality has been achieved.

You can't speak for all women (or members of the group the mansplainer is speaking for), but you can speak for yourself, which is enough to shoot down any mansplainer's generalizations. For example, you might say, "In my experience, it's scary to walk alone as a woman because sexual harassment is so common."

3. If: Someone Is Mansplaining In Defense Of Sexism Or Against Feminism...

Some mansplainers, like the one targeting this feminist, have made it their mission to explain why feminism is unnecessary, why sexism no longer exists, or why a sexist thing is not actually sexist.

4. If: Someone Is Mansplaining About Your Area Of Expertise...

This is one of the most common forms of mansplaining and the topic of the Tumblr Academic Men Explain Things To Me. Being "educated" about a topic you clearly know more about than the speaker is extremely frustrating because the mansplainer is usually assuming you know less than you do because of your gender.

Try: ...Asking An Incisive Question About The Topic

If someone wants to tell you about a scientific theory you've spent the last four years studying, try asking them what they think of a competing theory or a hotly debated experiment. Or, just express your own opinion. If you stump someone with a question about the topic he's trying to explain to you, he may think twice about explaining it to another woman again.

5. If: Some Is Using Mansplaining As A Persuasive Tactic...

Some mansplainers will use mansplaining to convince you that you should do something because you will definitely like it and you just don't know it yet.

Try: ...Reminding Them That It's Your Body, Your Choice

Even if the mansplainer has a magical ability to read your mind and predict how you will react to that food or drink or activity you NEED to try, it still doesn't matter because you don't have to do anything that affects your body or takes up your time if you don't want to.

You've heard the whole "mansplaining is made up by feminists" argument. Because thank goodness we have men to tell us that the things we experience every day never really happen.

Try: ...Sorry, I'm Out Of Suggestions

That's just too meta for my brain to process. And I'm sorry to say it, but any mansplainer who responds to learning about mansplaining with more mansplaining is a lost cause. Save your energy for the less hopeless cases.