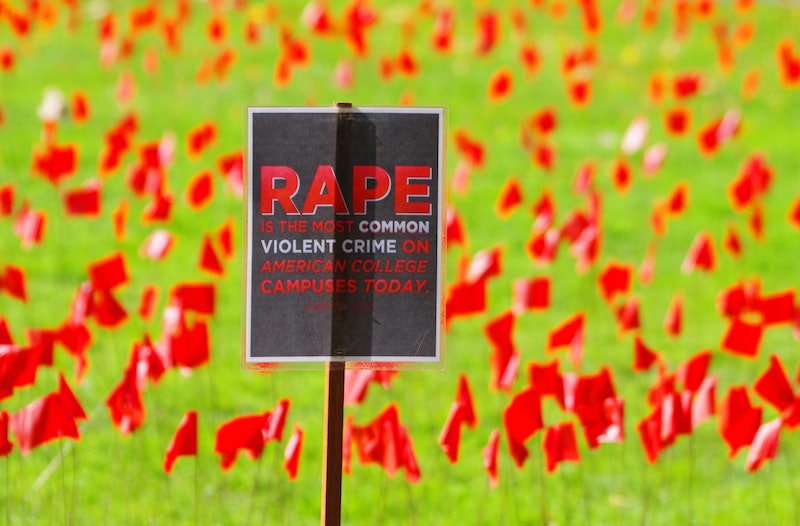 How many more studies need to arrive at this conclusion before it's accepted? Results released Monday from the Association of American Universities' (AAU) Campus Climate Survey on Sexual Assault and Misconduct confirm that there's an epidemic of sexual assault on college campuses — and actually suggest it might be even worse than we thought. While there's a widely cited statistic that one in five women is sexually assaulted during college, AUU's survey found that number to be about one in three: 33.1 percent of women in their senior year who participated in the survey said they had been the victims of nonconsensual sexual contact at least once. The number drops to one in four if we're only considering assault by force or incapacitation, but any form of sexual coercion or lack of consent is still sexual assault, even if no physical force is involved. Additionally, 39.1 percent of TGQN (transgender, genderqueer, questioning, or non-conforming) people reported such victimization; nor were men exempt, with a rate of 8.6 percent. And that's before college is even over: These numbers are based on college seniors surveyed last spring.

The Association of American Universities asked 150,000 college students from 27 universities, including most Ivy Leagues, whether they had experienced several types of nonconsensual sexual encounters: by physical force, by incapacitation (drugs or alcohol), by coercion ("involving threats of serious non-physical harm or promising rewards"), or by absence of affirmative consent (no "yes"). It also accounted for attempted penetration, though it only asked about completed assaults of other types (if it included all attempted sexual assault, the number would likely be even higher). The survey also found that 28 percent of incidents or fewer were reported to law enforcement or a school agency, and over half of victims said they didn't consider the crimes serious enough to report.

Statistics about sexual assault on college campuses are widely cited — "it is estimated that one in five women on college campuses has been sexually assaulted during their time there," said President Obama said at a Council on Women and Girls event — and also hotly debated. After one study found in 2014 that one in five women had been sexually assaulted during college, Christina Hoff Sommers told TIME that she believed this statistic may be due to selection bias; she also said she believed the number was more likely one in 40. But after the study was repeated at more schools, the one-in-five finding remained consistent. (The number is likely lower than the AAU's because it asked about fewer forms of assault).

Another objection to the one-in-four and one-in-five statistics — one that's seen in action in the TIME article — is that they refer to sexual assault , not rape. But the fact remains that women and TGQN people are experiencing an inordinate amount of sexual contact without their consent, and that is traumatic regardless of what form it takes. If you're curious, though, the AAU survey found that the prevalence of unwanted penetration and oral sex (as opposed to touching, kissing, and other forms of sexual contact) was 17.1 percent for women, 23.2 percent for TGQN people, and 3.6 percent for men.

Results of campus climate surveys depend on how the questions are posed and who is answering. For example, the survey confirming the one-in-five statistic only asked about rape and "sexual battery" that was caused by either force or incapacitation. The same study, as expected, found that the prevalence of women experiencing sexual assault was 13.7 percent when it considered responses from students throughout their college years, not just seniors. Another survey found that nearly one in five college women has been the victim of attempted or completed rape during their freshman year, and a number of others have also produced the one-in-five statistic in various ways.

Whether the statistic is one in three, four, five, or another number, what's clear is that the campus sexual assault epidemic is not made up. People have no incentive to lie on these surveys. Contrary to claims that a large percentage of rape accusations are false, results like these show that the crime is vastly underreported. Indeed, according to the National Center for the Prosecution of Violence Against Women, "estimates for the percentage of false reports begin to converge around two to eight percent" — hardly a large percentage.

The AAU's results also add valuable information to the conversation about campus assault by taking different types of sexual abuse into account. Lack of affirmative consent and coercion are means of assault, and so is any form of unwanted sexual contact. When we consider all the ways someone's boundaries can be violated, it's no surprise that the statistic is higher than we thought.

More like this
34 Quotes That'll Inspire You On Juneteenth & Beyond
By Syeda Khaula Saad and Siena Gagliano
How To Fight For Reproductive Rights, Based On How Much Time You Have
By Courtney Young
17 Powerful Photos From March For Our Lives Protests Across The U.S.
By Michelle Toglia
How To Protect Your Digital Privacy If You Need An Abortion Post-Roe
By Kaitlyn Wylde
Get Even More From Bustle — Sign Up For The Newsletter