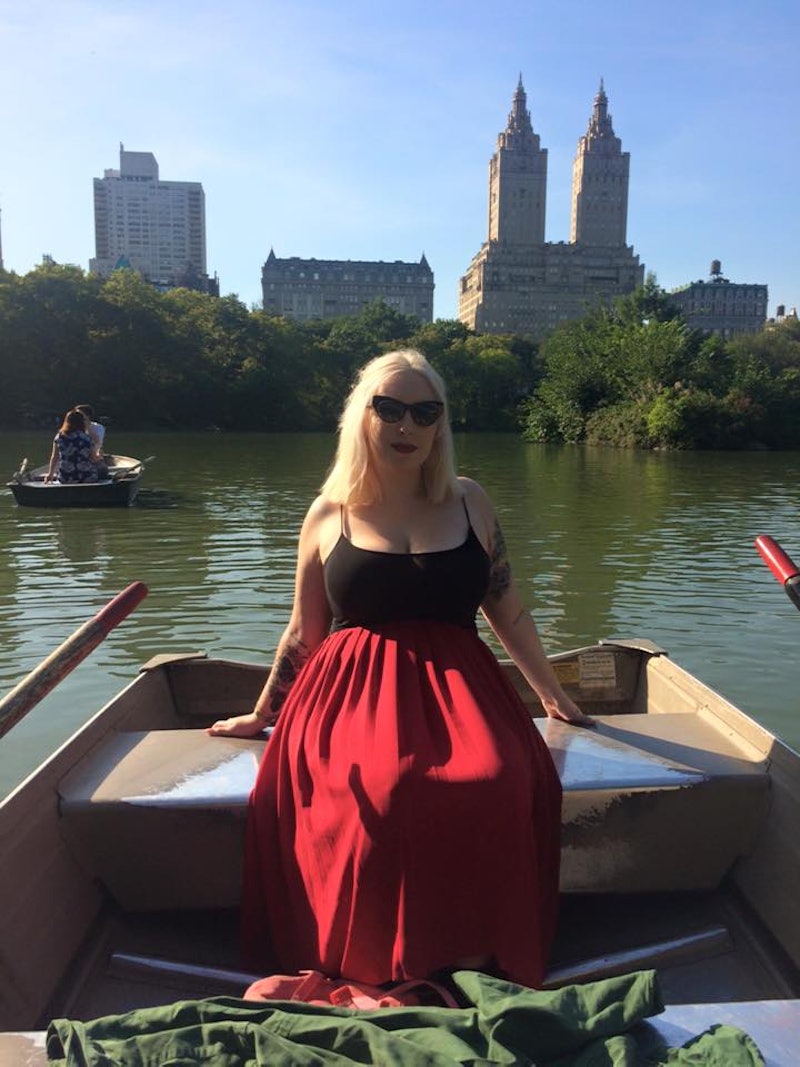 During a recent one night stand, I called myself "fat" and the guy I'd taken home tried to tell me I was beautiful — that I was curvaceous and that I definitely wasn't fat. Honestly, reclaiming the word fat has caused the people who like me much more grief than those who don't. The ones who hate me finally get to call me fat with no repercussions (after all, I called myself fat first), but many who love me sometimes struggle to get their heads around using the term positively. When I consider how many years we all spent reassuring each other that we were " curvy not fat" (because fat was one of the most cutting insults we could dole out), I understand where the conflicting feelings come from.

Now that I'm officially into my 20s — no longer holding onto the title of "21" as a milestone rather than an age — I'm more willing to see how my body has changed in the past four years since leaving my hometown and my mother's Slimming World menus. Of course, much of my rapid weight gain is my own doing. I eat poorly, exercise little, and drink way too much. But the same rings true for almost everyone I went to school with. We all look older, definitely dress better, and a lot of us have gained a couple of pounds in the process.

In my body positive bubble (away from my hometown), I can call myself fat in front of friends and they don't flinch. They know my stance on the matter, they've read my articles, heard my speeches, and many have seen my fluffy, fat body in all its glory for themselves. Back home, though, so much gossip circulates about who's gained weight, who's lost weight, and who's just pregnant with their third child. I sometimes wonder how many people I know have tried to insult me for my 45 pound weight gain. And then I wonder why I still care, considering my advocacy for body positivity and fat acceptance.

The thing is, it's incredibly easy to preach body positivity from behind a keyboard. It's incredibly easy to laugh at trolls who have nicknamed me "hambeast" from the comfort of my bed. Even in real life, it's simple enough to explain why I'm reclaiming the word fat, why I'm calling myself fat, and why I'm happy to be called fat.

But when a word is thrown at you with venom — when a word is aiming to cut you deep and produce hurt — it's difficult to explain even to yourself that it "doesn't matter." When somebody spits fat at me with disgust, I'm not filled with self righteous self love. I just flash back to my 14-year-old, disordered eating, self harming self, who was more willing to contemplate suicide rather than be considered fat. As J.K. Rowling has famously said, "'Fat' is usually the first insult a girl throws at another girl when she wants to hurt her. I mean, is 'fat' really the worst thing a human being can be? Is 'fat' worse than 'vindictive,' 'jealous,' 'shallow,' 'vain,' 'boring,' or 'cruel?'"

When somebody says something specifically with the aim of hurting you — regardless of your stance of body positivity and regardless of whether it actually hurts you or not — I believe you're allowed to be upset. Even if you call yourself "fat" with positivity, that person is directing the word towards you with a brutal negativity. Shrugging it off because of your own interpretation of the word doesn't remove their intentions.

Too often, I feel members of the body positivity movement have to act impenetrable and impossibly strong in order to get our message across. Body positivity is a movement of self love and self care, but regardless of how positive a person you are and regardless of your body type, loving yourself every day, every way that you are, is pretty impossible.

Half of the time, I feel pretty negatively about my body and my looks. But for me, that's brilliant: That's an astounding amount of progress from the teenager who was 60 pounds lighter but constantly filled with self hate. In being able to wear low cut dresses and preach fat acceptance, even on the days when I don't feel those notions apply to myself, I know I've come far, and I'm openly proud of that fact. Even if I still have pretty far left to go.

Pretending not to be hurt when someone is actively trying to hurt you is a ridiculous standard to set for anybody. Body pos activists wouldn't be reclaiming the word "fat" if there wasn't already a vicious and complicated set of attributions and associations placed onto the term, after all. By using it positively for ourselves, we're already changing the perception of the word fat, of fat people, and of fat acceptance.

As with any argument, how you should react to a fat shaming situation depends entirely on the context, on the person doling out insults, and on your own comfort levels. But if somebody is purposefully out to hurt you, it's not necessarily up to you to give them a lesson on body positivity or waste your time trying to defend yourself. Instead, act how you would in any argument. If you're a pacifist, just ignore them and accept they're not worth your time. If you're feeling confident, tell them you actually like being fat. If your activist side is shining through, take the opportunity to educate them about size acceptance. Or if you're ready to fight, feel free to yell.

People need to know it's OK to feel the hurt, because from that we can learn and we can grow. It's not your sole responsibility as a fat person (purely because you're a fat person) to teach others to be OK with fat people, though. Instead, you can continue your body positivity classes for those who actually deserve them.