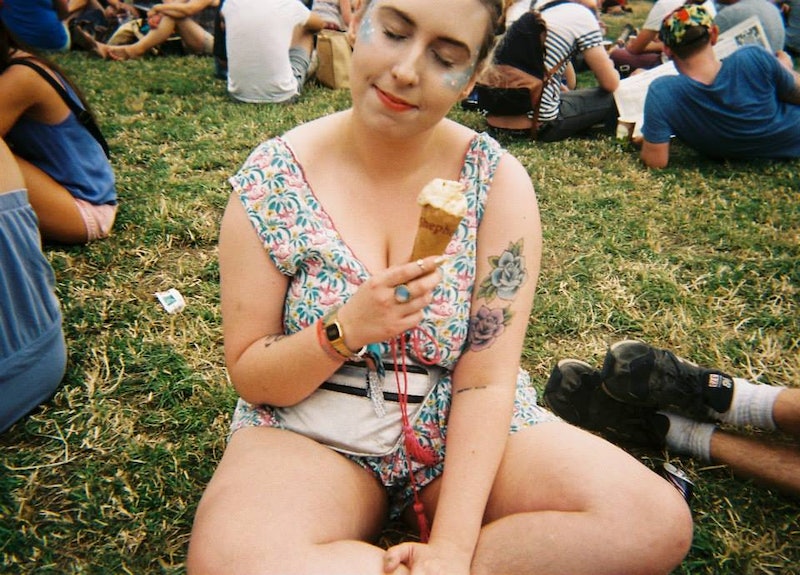 When you grow up as a teenage girl, the accusation of being fat can cut deeper than almost any other insult. The fault of this arguably does not lie at the feet of teenage girls or even just teenagers, though, but on the generations who raised us and spread these standards. Now in my 20s, I feel like I'm among those who will help set up notions of beauty standards for future generations, and that's why I've decided to reclaim the word fat. I grew up among family members who hated and berated themselves for being heavy, whilst repeatedly refusing to call me the word even though I was definitely a chubbier-than-average kid. As an adult who doesn't necessarily look as visibly fat as some, though, is it my place to join in efforts to take the word back?

Reclaiming and owning the hurtful words that were thrown at us as children, as teenagers, and as adults is seemingly a huge aspect of the body positivity movement. That's why in Pitch Perfect, when Rebel Wilson's character names herself "Fat Amy," before anybody else can use it behind her back, she became one of my most beloved characters in recent films. If we were simply to remove words from our vocabulary (á la #droptheplus), instead of aiming to remove the stigma, we turn words like plus size and fat into taboo, perpetuating the idea that they can only hold negative connotations. For me, fat as a descriptor is neither negative nor positive: It's simply an aspect of the body, and an aspect that I happen to have plenty of.

When you search the hashtag #fat on Instagram, you get almost 14 million hits. When scrolling through the pictures, however, you don't really find pictures of fat people (unless it's fat people being mocked). You find mainly thin women, pictures of food, the occasional chubby dog, thinspo posts, and — just every so often — a glimpse of body positivity as a fat person calls themselves fat for the world to see.

The problem I face when trying to tell thin people that they shouldn't use the word fat, whether they're being knowingly negative or not, is whether or not I, personally, can be classified as a fat person. My choice to adopt the descriptor fat over chubby or plus size or curvy was an effort at reclaiming a word that has haunted me since my very first chubby little footsteps. But there are plenty of fatter people than me in the world, and even my own mother doesn't quite classify me as a "true" fat person.

I can still shop at fast fashion stores. I'm not (openly) mocked for my weight. And it wasn't until the past couple of years that my body grew to look how I thought it did as a body dysmorphic teenager. When compared to others, I'm really not that fat. So is it still fair for me to use the term, if some would say that it doesn't actually apply to my body?

Personally, I believe that when a chubby girl takes a word that has been used to belittle her and uses it to empower herself, then nothing but positivity shines through. Although that person may not actually be fat, they're refusing to continue allowing fatness to be demonized. Through her reclamation, she's learning to liberate and love herself — which is precisely why I intend to keep self-identifying as fat.

When a thin person uses the term, however, it generally leaves a negative impact. They are juxtaposing themselves against fatness in order to place themselves in a positive light. The flip side is that although they've made themselves feel better about themselves (because they are told they aren't fat), they've thrown more weight (hah) behind the negative image that fatness already has in our society and media.

I believe that there does need to be a precedent for why a person is describing themselves as fat. Whether it's recovery from an eating disorder or from bullying or just an eschewing of traditional beauty standards, these reasons are meaningful and important. Calling yourself fat isn't just a means to seeking self-affirmation (although that's important), but seeking affirmation for all different types of fat people.

The important factor is the intent behind the declaration. We all need to help each other stop using the word fat as a negative and instead bring it back to the realm of neutrality. Or we go go one step beyond that and allow such a self-description to be seen positively.