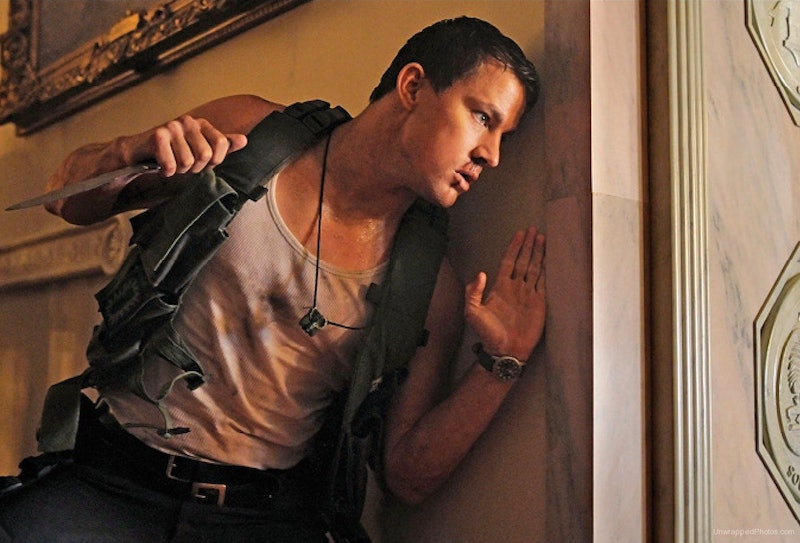 There's something warm and cozy about Channing Tatum. And we're not just referring to how we think it would feel to be rested in his arms. (Damn lucky baby Everly.) No, even though Tatum's only transformed himself into a superstar in the past 12 months — following successful turns in 21 Jump Street, The Vow, and Magic Mike — there's something about the actor that feels familiar. And that's because Tatum has become a throwback movie star for the '90s nostalgic generation.

In our post-9/11 existence, things got dark. Not only in the world, but on the big screen as well. The days of the 90-minute movie disappeared. We expected more of our rom-coms — specifically, during the Judd Apatow era, 60 minutes more. We expected more of our action movies — no longer could a badass hero Die Hard his way through a run-in with a criminal. Instead, he had to be psychologically tormented while shooting bullets. It wasn't long before movies stopped, quite frankly, being fun. Every project had a message, every actor felt a responsibility. And, if he or she didn't, we'd be left with escapism dreck like The Ugly Truth or Jack & Jill.

And then came Tatum, the rare beloved movie star who only headlines, Magic Mike withstanding, okay movies. All of Tatum's non-Magic Mike projects since 2012 — The Vow, 21 Jump Street, Side Effects, G.I. Joe Retaliation — are by no means Oscar bait, but audiences loved them. The Vow and Side Effects both earned respectable "B" CinemaScores, while G.I. Joe: Retaliation and 21 Jump Street picked up an "A-" and "A," respectively. And though Tatum's newest film, White House Down, scores only a 50 percent on Rotten Tomatoes, the film's received another "A-" CinemaScore for the actor. During a time period when we're skeptical of most movie stars — after seeing their scandals and bad behavior unfold on social media and tabloid websites — it's amazing just how much people like Tatum, regardless of the quality of his films.

It mimics the way movie-goers used to feel about Tom Hanks. Julia Roberts. Tom Cruise. Keanu Reeves. Hanks was so goddamn likable, we'd see and love anything he'd star in — be it romance (You've Got Mail), comedy (That Thing You Do!), drama (Apollo 13), or action (Saving Private Ryan). And before Erin Brockovich turned Roberts into an Oscar winner, audiences accepted shitty-but-crowd-pleasing movie after shitty-but-crowd-pleasing movie (The Pelican Brief, Runaway Bride, America's Sweetheart), so long as it starred Roberts and that patented inviting smile. But the past decade in Hollywood has be one void of the conventional movie star — George Clooney and Brad Pitt might get awards and headlines, but they don't deliver hits (or, at least, Pitt didn't until zombie-philes carried him to a World War Z box office success). But the White House Down star has managed to carve out a throwback niche for himself: The Channing Tatum Movie. (EDIT: Though, despite great word-of-mouth, the actor's latest release didn't quite deliver at the box office during this competitive weekend.)

It seems, as much as there was an appetite for serious, quality filmmaking in the past decade, '90s nostalgics are once again starting to respond to pure pulp on the big screen. And Tatum's the one actor giving us just that. Just look at White House Down, a film full of implausibilities and groan-worthy dialogue that's led to reviews calling the film "silly throwback," "absurd fun," or "refreshingly dumb." (Odd, isn't it, that we're finding comfort in a post-9/11 movie about the White House being blown up?) Even in my theater, movie-goers erupted in cheers throughout the film's climax — and applauded during Tatum's (spoiler alert!) inevitable victory — regardless of how ridiculous the action was on screen. In fact, the only other time in recent memory I've seen a crowd so enthusiastic was during the re-release of the ultimate 1990s movie, Jurassic Park.

By no means should we discount the great movie-making of the past decade — no matter how much it made me bawl, I would never choose to un-see fare like Beasts of Southern Wild — but there's an art in ridiculous fun. Tatum, shitty script or no, is giving us just that. And isn't it about time we had some fun at the movies?