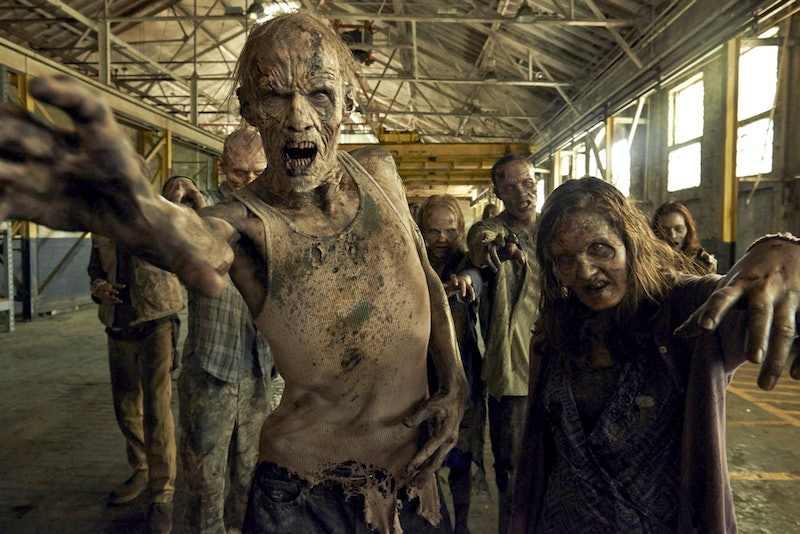 When the zombie apocalypse rises from out of nowhere, as The Walking Dead has shown us it will, there will more than likely be wide-spread confusion as to where everyone should run to. Do you have a zombie apocalypse plan? The hospital is out of the question, since that has the highest chance being the cause or at least responsible for the mass-spreading of the disease. Staying at home will clearly do you no good, unless you've built yourself an apocalyptic survival cave underground. Then there's always CostCo or giant warehouses, but there might already be a ton of people heading there.

As someone who took a college course on zombies in popular media (I'm a professional, people), you can trust me. And with the help of Sarah McHone-Chase and Lynne M. Thomas's essay: "Maintaining Academic Library Services During The Zombie Apocalypse," I'll share with you the perfect hideout answer: Libraries. Yes, you heard that correctly. I'm not talking about your tiny home-town library or bookstores, but the giant academic libraries that are the heart of college campuses and cities.

Academic libraries are usually somewhat massive, which means they'll be able to hold a lot of people. The giant front doors are more than likely heavy and lock-down approved. Libraries are full of resources and entertainment, so really, what better place could you go to? If you still need further convincing, I've got a couple good reasons for you. Because this is important business, people.

Academic libraries, similar to college campus lock-downs, already have a security system in place for when things go wrong. The entrances can be closed off, and even if there is a breech, there are multiple floors and stairways that could be easily restricted. If you need any heavy things to blockade the doors, you'll have a ton of bookshelves and books to do the work for you. Depending on how old the library is, the building should be sturdy enough to keep the brainless zombies out.

As most academic libraries are partnered with the local police, fire, and health departments, along with state and federal agencies, libraries will be a great place to stay connected throughout the zombie apocalypse. Even if libraries don't have the best source of food, most are usually filled with vending machines, water fountains, and a fridge or two. As McHone-Chase and Thomas's essay notes, "Academic libraries have a long history of public response to epidemics and wars," which proves that you can put your life in the hands of these people.

You may have a preconceived idea of librarians being grumpy or strict, which I won't say is completely off, but they are also so much more than that. I'm talking about the people who dedicate their lives to sharing accurate information with the public and ensuring everyone has the right to it. If the media is blowing up during the zombie apocalypse, you can trust a librarian not to lie about the situation at hand. Librarians are also committed to helping people and would definitely become saviors in the event of the zombie outbreak. Let's face it, librarians kick ass.

4. If You Still Have WiFi, Libraries Will Have Computers

Let's say we're all still connected during the zombie invasion. There's a high chance you'll lose power in your own home, but libraries and other massive buildings have backup generators that would kick in at least for a short time to connect with anyone. There will be multiple computers to share instead of fight over. It will also allow different minds to start researching different solutions and ideas to the current zombie situation.

5. If You Don't Have WiFi, Libraries Will Always Have Books

What's the best weapon in the world? Books, of course! Whatever happens, academic libraries are full of books on medical information, epidemics throughout history, survival guides, and just about anything you might need to learn or refresh on. McHone-Chase and Thomas make sure to mention that "...the best way to fight zombies is to leverage what academic libraries have and zombies lack: information and the ability to use it."

6. Libraries Are Full Of Entertainment

I know this reason isn't exactly survival-worthy, but the zombie invasion probably won't be as exciting as it looks in zombie horror movies. Or, if it is as terrifying, at least you'll be surrounded by books. And books don't need to be charged or plugged in. You'll be set on keeping your mind distracted.

7. All The Information You Need To Rebuild Is Readily Available

There may never actually be a zombie outbreak, but if there is, hopefully it'll be short lived. Libraries will have the necessary information on how to start society back up after it's crashed and burned. After all, humans have history of picking themselves back up after epidemics, and it's all recorded in the books. If certain professions are needed, such as engineering or medical help, libraries can offer the immediate resources and ideas to local communities.

Basically, if I haven't made it clear by now, your best bet to survive the zombie apocalypse is to run to your nearest academic library and make a shelter out of books. Stick with the librarians and just say no to zombies.