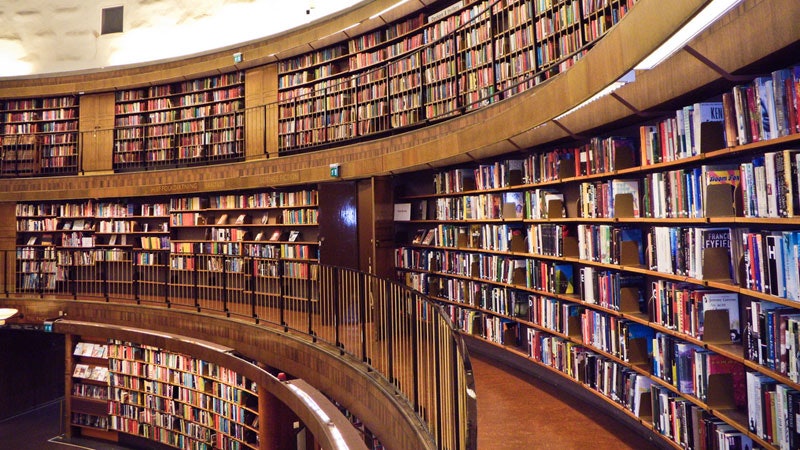 There seems to be a holiday for everything these days. From National Donut Day to International Women's Day, the silly to the significant are celebrated, honored, and remembered in one special way or another. For readers nationwide, there's National Library Week. April 12-18 gives us not just a day but an entire week to celebrate and honor every kind of library and librarian, from public to school to academic, and anything in between.

So what exactly is National Library Week? Sadly, it is not seven straight days where businesses are closed and people are encouraged to read in their local libraries (though that's a good idea — someone make that happen). When researchers in the 1950s revealed that Americans were reading less and instead spending more money on entertainment such as televisions (sound familiar?), the American Library Association (ALA) called on other concerned citizens to form the National Book Committee, who would be charged with solving the issue.

In honor of National Library Week, here is a round-up of librarians, past and present, who make it possible to celebrate:

Inventor of the Dewey Decimal System

Melvil Louis Kossuth Dewey is perhaps one of the most well-known librarians and educators on the list, and you probably remember him from your elementary school library days. In 1876, he came up with the Dewey Decimal Classification that is still used today in classifying and locating books in libraries.

OK, so now it makes sense why the library is a hot spot for hook-ups. The original womanizer, Giacomo Casanova, was not only an adventurer, author, and notorious lover, but he was also a librarian at the Castle of Dux in Bohemia (now in the Czech Republic). Nerds can be sexy, too.

Born Charles Lutwidge Dodgson, Lewis Carroll was a writer, photographer, mathematician, deacon, and a librarian, among other things. Before Alice's Adventures in Wonderland was on virtually every library shelf, Carroll was a sub-librarian at the Christ Church at Oxford. Maybe he found some inspiration in the stacks.

If you've ever read "The Library of Babel," now you know where Jorge Luis Borges got the idea for the story. He worked as a pubic librarian and lecturer for a few years before being appointed the director of the National Public Library in Argentina, and before becoming one of the most celebrated figures in Spanish lit.

If you're a RBG fan, then you'll love this lady librarian. Golda Meir was Israel's first female prime minister, and only the fourth woman to hold that position in the world in 1969. Before she was signing the Israeli declaration of independence and standing up for equality, however, she was alphabetizing authors in the public library system.

Director of the Federal Bureau of Investigation

Before serving under eight U.S. presidents as director of the F.B.I., before all the controversy, before Leonardo DiCaprio was J.Edgar, Hoover worked at the Library for Congress. Though he might not be the ideal picture for what you would want from your local librarian, what with the blackmailing and threats and all, Hoover made the list for doing something no one else had.

Radical feminist, writer, and poet Audre Lorde might have found her taste for revolution while working as a librarian in NYC's Greenwich Village in the 1960s. During her years as head librarian at the Town School Library, Lorde became an active member in the gay community and seemed to find the voice she would later use to fight for sexual, civil, and gender rights.

Another author who lived among the books before her name was on millions of them, Beverly Cleary began working in libraries at the young age of 18 and went on to get her degree in library science from the University of Washington. Cleary has noted that her years working with children as a librarian was what opened the door to writing children's books for her, and we are all grateful of that!

Not just anyone gets an action figure modeled after her, but Nancy Pearl is far from just anyone. She is a bestselling author, highly respected literary critic, and the closest thing to celebrity a librarian gets. In addition to her previous work as the Executive Director of the Washington Center for the Books in Seattle, she has her own monthly television program, Book Lust with Nancy Pearl and a frequent book reviewer for National Public Radio.

There is no one taking libraries and information science to the next level like Jesamyn West, librarian, blogger, and creator of librarian.net. A vocal supporter of free speech and access to information, West has controversial views about the librarian profession and frequently writes about them on her site. With technology becoming more and more a part of library science, West is a librarian to look out for.

Kevin Ray was one of ten librarians nationwide to receive the 2014 Carnegie Corporation of New York/New York Times I Love My Librarian Award, the first of two recipients on this list. Ray not only initiated a popular Writing Workshop series for young people at his library, but he also works with the Cuyahoga County Juvenile Detention Center in establishing a reading club for teens that was so popular, a second club had to be formed.

Elizabeth "Betsy" Bird is a New york Public Library Youth Materials Collection Specialist, but her role in the book world goes far beyond the library steps. She is also a book reviewer for School Library Journal where she has her own blog, A Fuse #8 Production. If you need a book suggestion for kid or young adult, Betsy Bird can be considered your go-to.

Lisa Darms name might sound familiar if you are familiar with the Riot Grrrl cultural movement. Darms is not only a senior archivist at the Fales Library & Special Collections at NYU, but she also founded the library's Riot Grrrl Collection and was one of the editors of The Riot Grrl Collection. She's the kind of librarian you just want to go out on the town with, y'know?

Ferguson has been in the news again, but this time it's not all bad. Ferguson Public Library director Scott Bonner just won the Lemony Snicket Prize for Nobility in the Face of Adversity. When his community was shaken by protests after the shooting of Michael Brown, Bonner opened his library to teachers and students who had nowhere else to go. After crowdfunding raised more than $175,000 for the library, Bonner spent the money on books about diversity and civil rights. Yep, I would call that nobility in the face of adversity for sure.

Library Journal's 2015 Librarian of the Year

Another first for a woman on this list, Siobhan Reardon is the first woman to serve as the President and Director of the Free Library of Philadelphia. This year's recipient of LJ's 2015 Librarian of the Year award, Reardon was recognized for her innovation and determination in refocusing the library's programs for those who need it most: job seekers, entrepreneurs, new Americans, children, and people with disabilities.

Diversity in books has been a heavily discussed issue over the last few months, but what about diversity in the library itself? Diane Brown (center), a library branch manager in the New Haven, Connecticut, area, is the only African-American librarian out of 38 full-time library employees, but she intends to change that. Brown goes to local and national career fairs to recruit more diverse applicants into the library system to better represent the communities that they are in.

David Lopez is the second name on the list who was honored with the 2014 Carnegie Corporation of New York/New York Times I Love My Librarian Award. Understanding that there is more than one kind of communication barrier, Lopez helped to develop technology literacy programs for both youth and adults as well as programs for new Americans and those learning English as a second language.