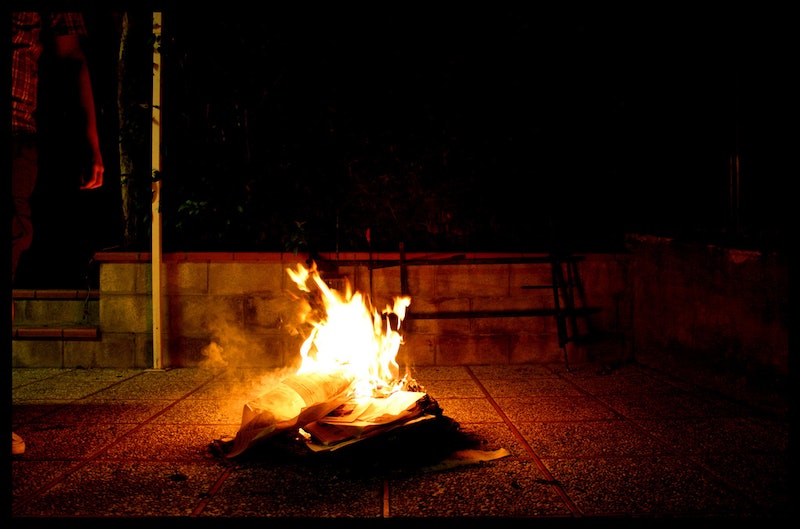 The future is currently looking pretty bleak. Global warming remains an ever-present threat. The Kardashians are apparently America's first family. Syria has essentially collapsed and is threatening to take the rest of the Middle East with it. The Pacific Northwest is slated to fall into the ocean sooner rather than later. Donald Trump exists. Plus, there's a Rapture coming at some point, right?

One way or another, our society seems doomed to devolve into a dystopia (or a post-apocalyptic wasteland), and if there's one thing I've learned from science fiction, it's that dystopias do not have books. Whether it's been lost to epic disasters, outlawed, or just fallen out of fashion, literature is at best difficult to obtain in a dystopia. At worst, it's liable to get you killed. (Of course, what's a terrifying future possibility for me is the nightmarish present for those living under repressive regimes — consider this today's reminder of what you take for granted.)

Forget the draconian restrictions on freedom of speech and creepy predetermined relationships, booklessness may in fact be the very worst part of life in a dystopic society. Lest you believe I'm exaggerating, I've compiled a list of the many unpleasantnesses of living in a world with no books, from the mildly annoying to the genuinely disastrous.

You Can't Reread A Favorite After A Bad Day

Of course, if you lived in a society with no books, you probably wouldn't have a favorite one, but still: not being able to turn to a much loved novel when you're feeling down is a a tragic fate indeed.

There Aren't Any Good Entertainment Options

If there were no books in the world, but tons of great TV shows and movies, it would be unfortunate, but I would make do. Alas, whether because of more pressing concerns like making sure you're not murdered by bandits or simple censorship, future societies with no books don't usually have interesting TV or movies either. In Gary Shteyngart's Super Sad True Love Story, everyone makes fun of Lenny for his love of literature, but their idea of fun is apparently watching minor celebrities narrate their lives on constant video streams. Not too far off reality, perhaps, but still terribly boring-sounding.

Censorship Doesn't Only Apply To Fiction

Dystopias aren't exactly rolling in great newspapers and magazines either. A society without books is also one with out freedom of speech.

You Can't Weed Out Potential Dates Based On Their Tastes

The simple truth is that most book lovers judge people on their taste in literature. (My first rule: if he loves Jack Kerouac, run.) In a future without books — or any kind of art, really — you would no longer have this invaluable winnowing tool, and figuring out whether someone is interesting and compatible gets that much harder.

Words No Longer Mean Anything

The one thing that almost all dystopias have in common is a wealth of euphemistic slang: you're not a human brood mare — you're a handmaiden! Of course, the classic example of this tendency is George Orwell's 1984, which paints a terrifying picture of a world where words no longer mean anything.

Loving Literature Is Punishable By Death

Books aren't illegal in every dystopia, but when they are, the authorities take violations very seriously. Sure, books can be dangerous — at least to autocracies — but I think we can all agree that people shouldn't be murdered over reading, or writing, them.

Everyone Is A Jerk

The worst thing about a society without books would be all of the people who've never read books. Not only would you be denied the great joy of having someone to talk to about the novel that just totally changed your life, but, given that studies have shown that reading increases empathy, people in general would probably be far less interesting and kind.