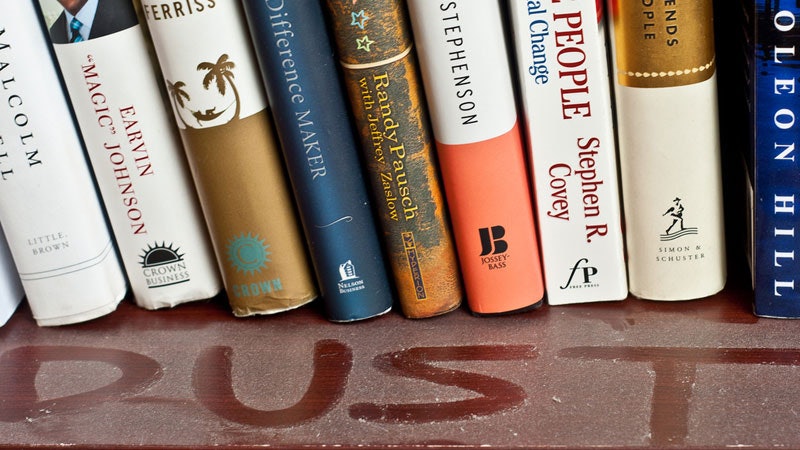 On entering someone’s house, I have a tendency to make a beeline for the bookshelves. This habit works as an excellent conversation starter: “Oh, I love these essays,” “I’ve never seen this novel before, is it any good?” “So have you actually read Ulysses , or….”

Recently, I visited a new guy’s apartment for the first time. Per usual, I headed straight for the bookcase — he’d been bragging about his collection and I was excited to discuss favorites. Once there, however, I noticed that just three of the shelves held books, one with what looks like college textbooks, one with a bunch of bestsellers, and one entirely filled with Stephen King. “Isn’t it great?” he asked. I believe my jaw may have literally dropped.

The problem wasn’t that he didn’t have that many books, nor that he apparently really loved Stephen King, but rather that he was so certain I would be impressed. That disconnect indicated a profound mismatch in our personalities that only grew clearer as the evening drew on.

My guy’s cluelessness was essentially benign — however, some books are truly bad signs. Although there are always exceptions, these eight literary dealbreakers should make you seriously reconsider dating someone:

He Owns Every Book by Jack Kerouac, and Tells You How He Can Recite Them Word for Word

Look, plenty of people have read Kerouac, whether for school or out of innocent curiosity, and may even have a stray copy of On the Road lying around. But if someone self-identifies as a Kerouac fan, or worse, starts reciting, “the only people for me are the mad ones…”, run. He is way too impressed with his own intellect, and he will always refuse to make plans, because plans are for squares.

She Mocks You for Reading YA Novels

Any person who thinks she knows better than you just because she’s read all of In Search of Lost Time isn’t worth yours. If she’s mean about what you like to read, she’ll be mean about other things as well.

He Describes His Favorite Genre As “American Realism”

This statement is code for “I only read books by middle-aged white guys.” He's probably a soon-to-be-middle-aged white guy. Given the huge range of fascinating perspectives out there, I’m suspicious of anyone who limits himself (or herself) to books written by people exactly like him.

He Considers Himself an Übermensch

Thankfully, this tendency is less common once you get out of college and away from 18-year-olds who just read Nietzsche and think they can use philosophy to justify their bad behavior while sounding super-smart. Seriously though, I think it’s pretty obvious why you shouldn’t date someone who compares himself to Raskolnikov, even indirectly.

She Trashes Your Book Recommendations (That She Asked For)

We’ve already discussed people who make fun of you for your taste — they’re terrible! — but even worse are the ones who specifically ask you for your opinions and then tell you how wrong you are. If I take the time to create personalized recommendations for you, I expect constructive criticism at least.

He’s Confused As to Why Anyone Cares About VIDA Statistics

This guy secretly agrees with V.S. Naipaul about women writers and is given to saying things like, “If women really wanted to write for The New York Review of Books, I’m sure they could.” Missing the point, much?

His Favorite Book Is The Great Gatsby

Before you consider mowing me down with a yellow car, let me clarify: The Great Gatsby is a great novel. It’s a pretty solid favorite book, actually, if not the most original. However, a lot of people who claim it as a favorite do so by default: they don’t have any more interesting ideas and vaguely remember reading it in high school. I don’t want to date someone who can’t be bothered to engage with me honestly — I’d rather have a conversation about his love of Dan Brown or why he really does think Jay Gatsby is the greatest character in American letters.

Please note that this type of individual is distinct from someone who doesn't read that many books or who prefers genre fiction to Dickens; I’m talking about the strange and frightening person who will explicitly describe herself as not reading at all. I don’t understand this person, nor do I want to.