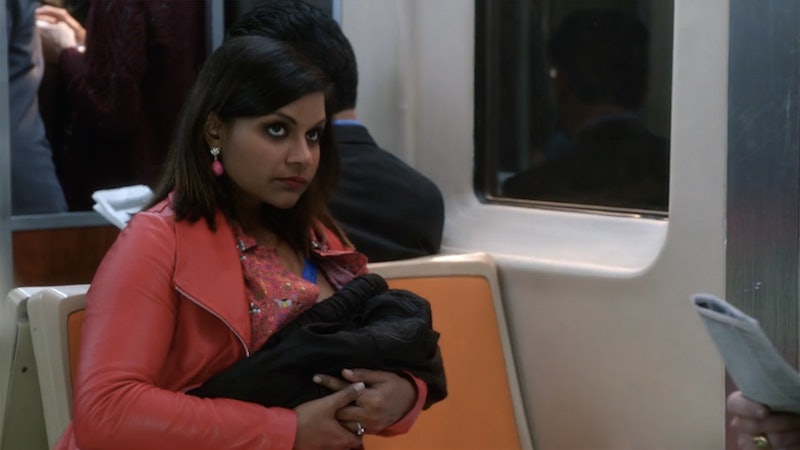 The Mindy Project is a comedy, no doubt, but the most recent episode, "The Bitch Is Back," did not end on a funny "haha" note. In fact, it ended on a rather diminishing note, when Mindy was essentially guilted into being a stay-at-home mother to newborn Leo Castellano. And that's not the only thing our favorite pop culture-obsessed protagonist faced in the newly released episode. The Mindy Project covered sexism in the workplace, and it was new ground, and important ground, for a woman of Mindy Kaling's power to cover.

In the episode, Mindy is shamed by a man on the subway for breastfeeding her son in public. It's not a new thing, unfortunately, since the power of social media shares the same story regularly about mothers being shamed for feeding their children in public. But, it was an important thing for The Mindy Project to cover. Often, the show can be silly, but that doesn't mean it can't service a message about women's bodies and their right to breastfeed. Mindy Lahiri, standing for "women's rights, or something," got fired up by the man on the subway, only to learn that he — Jodie — is the new doctor at Schulman & Associates.

Jodie's presence sets off a parade of emotions in Mindy, as she feels she is being highly disrespected by Jodie, someone that the rest of the office seems to love. Mindy works to prove that Jodie should be fired, down to interrogating a new mother on how Jodie delivered her baby. As it turns out, Jodie is a sexist — a self-proclaimed sexist — and even though Mindy has a huge problem with that, the rest of the office doesn't. And thus, Mindy Lahiri quits the practice.

You might be wondering where Danny fits into all of this. Danny has been focusing on giving Mindy a push present, but the only push he seems to be giving her is to be a stay-at-home mother. While choosing to be a stay-at-home mother might be a fine job for Mindy, it is important that it is her choice. By the end of the episode, it's obvious that she wants to return to work, recognizing that quitting was a brash decision, but Danny gives a quick tug-at-your-heart-strings speech about her being a stay-at home-mom, causing Mindy to not voice her skepticism about staying with Leo at home.

The episode ends there, but that's definitely not the end to this story. It would be cool to see Mindy do what she wants to do coming episodes. If I know Mindy Kaling — I don't, technically, but I feel like I do — she will let Mindy Lahiri take the path of her own choosing. There's nothing wrong with being a working mom, and there's nothing wrong with being a stay-at-home mom. It is just important that Mindy makes that decision for herself, and not at the guilt of anyone else.