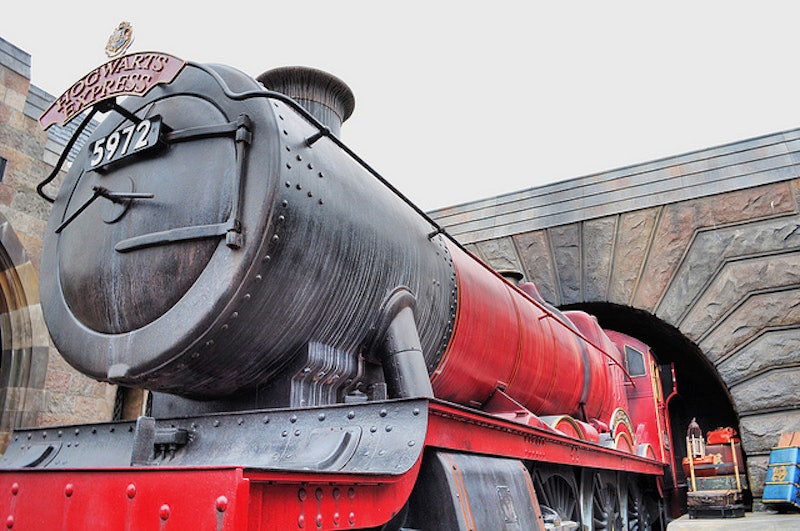 There are two things I love most in this world: books and traveling. When the two of them combine, I'm in my happy place, and when they include Harry Potter — well, then I'm in absolute heaven. Although the Harry Potter books took place in a fictional world where 11-year-old children begin magical training, three headed dogs can be pets, and broomsticks and floo powder are the preferred modes of transportation, there are still plenty of real-life places that every Harry Potter fan should visit in her lifetime.

When it comes to going away, most of my vacations are book-lover oriented already, whether that means visiting a real city from a fictional novel, the birthplace of an author, or the place that inspired the book. If, like with Harry Potter, the books were made into the movie, then film sets and studio tours are fair game for literary-themed travel, too. From the place where and author sat and typed their manuscript to the room where your favorite scene was filmed, literary-inspired trips are just further proof that books can take you to new and exciting places, both figuratively and literally, and that is especially true with the Harry Potter books.

From Edinburgh, Scotland to London, England, and even to Orlando, Florida, here are 11 Harry Potter-inspired places you need to visit. Don't worry, there are plenty of them to keep you jet lagged for weeks.

If you're a die-hard fan of a book, then you're probably dying to see where the author actually wrote it. J.K. Rowling was living in Edinburgh, Scotland, at the time she wrote Harry Potter and the Sorcerer's Stone. You can visit the cafés she wrote in and see the sights, walk the streets, and hear the sounds of the place that inspired the author to create the wonderful world of Harry Potter.

Sadly, the Hogwarts Express is not real, but the beautiful scenic trip the train in the film took is, and you can take it, too. By traveling on the Jacobite, a train from the highest mountain in Britain, Ben Nevis to the deepest seawater loch in Europe, Loch Nevis, you'll pass over the Glenfinnan Viaduct, the bridge made famous from the Harry Potter movies. It was not only featured as part of the Hogwarts Express trip, but it was also where Ron and Harry found themselves nearly squished by a train in the flying car.

The ninth annual Quidditch World Cup will be held in Columbia, South Carolina in April 2016. Yes, Quidditch is a real thing now, and nearly 200 teams nationwide participate in the sport, 80 of which make an appearance in the annual World Cup event. While there is no flying involved, watching a person act as the snitch is just as entertaining. If you love the Harry Potter series, then this is a must-see.

If you want to know what it's like inside the walls of Hogwarts or sit inside the Weasley's flying car, then Warner Bros. Leavensden Studio in London is the Harry Potter experience you're been waiting for. It houses props and costumes from the films, sets, including parts of Diagon Alley, and a scale model of Hogwarts School of Witchcraft and Wizardry, and more magic then you can believe. This year, it's also the place you can have Christmas dinner in the Great Hall. It's a Potter-fan's dream come true.

It's not only the place where Harry and his classmates learned to fly in Madam Hooch's flying class in the film, but Alnwick Castle was also the setting for Ron and Harry's flying car crash. Located in Northumberlnd in North East England, the castle will may look familiar with you for more that just HP-related reasons. Downtown Abbey, Elizabeth, and Robin Hood Prince of Thieves also used Alnwick as a setting.

Although the London Zoo isn't technically the zoo Harry and the Dursley's visited on Dudley's birthday — the first time Harry got to go to London was with Hagrid for school shopping — it does have a reptile house featuring boa constrictors, so it's pretty close. You can even invite your least-favorite relative along and see if you can't trap them behind the glass, just like Harry.

Even though you'll probably never get your Hogwarts acceptance letter, you can go away to wizarding school for a long weekend. At the College of Wizardry, a four day live action role playing experience in Czocha, Poland featuring magic classes, mythical creatures, and room and board in an actual castle.

If you watched the Harry Potter movies and wondered where the breathtaking backdrop to the Quidditch games were, look no further than Glen Nevis, a glen in Lochaber, Highland, Scotland. It has dramatic peaks, bright green valleys, and plenty of outdoor adventures to make it worth the trip. You can even visit Steall Falls, where part of the Tri-Wizard Tornament from Harry Potter and the Goblet of Fire was filmed.

Oxford University was home to some of the most celebrated authors, including J.R.R. Tolkien, Oscar Wilde, and Aldous Huxley. As if that weren't reason enough to want to visit it, one of the school's libraries, Bodleian Library, was the set of the Hogwarts library, among many other famous film scenes. The university's divinity school was also featured in the Harry Potter films as the infirmary, a place Harry and company frequented throughout the series.

The Wizarding World of Harry Potter

Orlando, FL isn't just for Disney fanatics anymore. The Wizarding World of Harry Potter, at Universal Studios, is like stepping into the pages of Harry Potter. You can explore Hogsmeade and shop in Diagon Alley, and you can even take a ride through Hogwarts. Just be sure to bring your spending money, because you'll want to buy everything you see, from the butter beer to an official Hogwarts robe, while you're there.

More like this
Rupert Grint Just Shared A *Major* Update About Ron Weasley’s Future
By El Hunt
Netflix Shut Down 'Bridgerton' S3 Rumours About A “Very Dark” Storyline
By Bustle
Here's How Netflix Should Adapt Prince Harry's Memoir Into A Movie
By Ginny Hogan
Your Guide To Watching 'Everything Everywhere All At Once' In The UK
By El Hunt and Sophie McEvoy
Get Even More From Bustle — Sign Up For The Newsletter
From hair trends to relationship advice, our daily newsletter has everything you need to sound like a person who’s on TikTok, even if you aren’t.