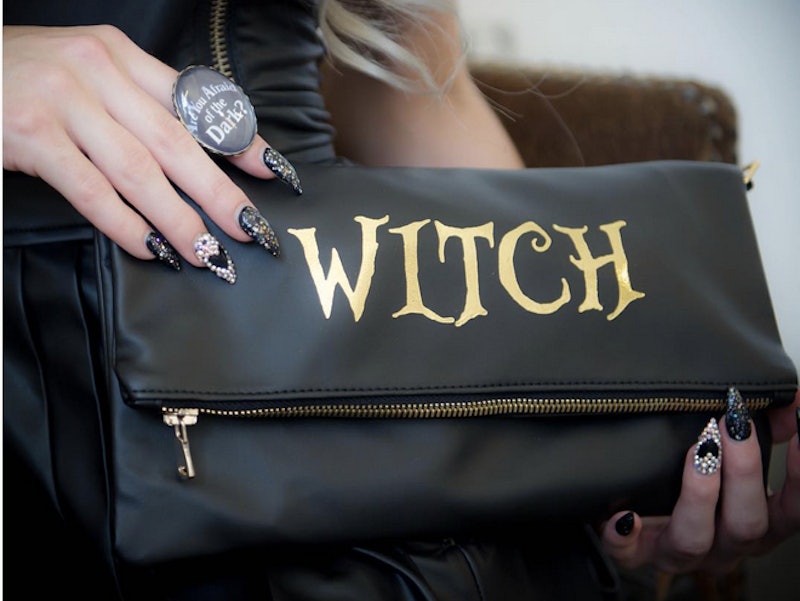 Sex and the City's Miranda Hobbes definitely had a point when she bemoaned the symbolic implications of Halloween costume options for women everywhere: “The only two choices for women — witch and sexy kitten.” And the fact that she ultimately chose witch kinda says it all. But the lovably disgruntled Miranda may have not have been giving witches quite enough of the credit they deserve.

If the magical maidens of literature are any indication, witches — just like women — can be both the sorceress and the sexy kitten; and a whole lot more to boot. From their early identities as magical earth mommas to the pointy-hat-wearing spell casters of today, witches in literature are just as varied and diverse a group of women as their non-magical counterparts. The best fictional witches are complex and conflicted, totally self-reflective, and (for better or for worse) they’re ladies who definitely get sh*t done. With Halloween just around the corner, and a weekend’s worth of costume party invitations burning hole in your inbox, now is definitely the time to give all those witches from fiction a second glance

Here are eight of the best witches in literature, just in time for Halloween. Because, even though it's SUPER-tempting, you can’t be Hermione every night.

Yes, Elphaba is wicked. But can you really blame her? Sometimes it's hard to take the high road and, as it is, Elphaba's is filled with roadblocks, hardly sunshiney-yellow-brick-paved. She was BFFs with Glinda until their lives veered in opposite directions, after all. And she wasn't even totally convinced she wanted to use witchcraft until she realized what a tyrant the Wizard of Oz was. Plus, nobody likes it when someone gives away a killer pair of heels that were rightfully yours.

Glinda, The Wonderful Wizard of Oz by L. Frank Baum

The yang to Elphaba's yin, Glinda is perhaps the most famous of all the benevolent witches. Contrary to popular belief, Glinda is actually the Good Witch of the South (yup, the film messed that one up.) Despite the fact that she is quite probably thousands of years old, she has maintained her youth like a champ. She's credited with wanting to unify Oz instead of destroying the wicked witches of the east and west. And one essential, but little-known fact: she basically taught the famed Wizard of Oz everything he knows.

Was her name inspired by a Finnish telephone directory? Or a Copenhagen politician? Readers may never know the truth. But what we do know is that Serafina Pekkala makes being a witch look just a little tempting. Sure, she's loved and lost — but she's not afraid to love again. The fact that she owns no personal belongings definitely speaks to the minimalist in me. She loves to fly (who wouldn't?) and she's got some well thought-out ideas about fate, destiny, and her overall place in the universe.

Can I just say how much I adore Mildred Hubble? She might be the worst student to ever attend Miss Cackle's Academy for Witches, but she's also kind of hilarious. I mean, from day one this witch-in-training didn't really stand a chance. When black cats were distributed, the poor girl was given a tabby. But despite her clumsy foibles and prankster antics, Mildred has a whole lot of heart and keeps her spirits high.

Morgan Le Fay, The Life of Merlin by Geoffrey of Monmouth

I think we all need to agree to cut Morgan Le Fay some slack here, because history has put this magical lady through the ringer. When she was first imagined, back in good ol' 1150, Miz Le Fay was actually a good witch — a healer and an enchantress to whom King Arthur was brought when he was fatally wounded. A few hundred years and one super unflattering Medieval Christian makeover later, Morgan Le Fay has become seriously sinister. I vote to bring back the original.

Sukie Rougemont, The Witches of Eastwick by John Updike

There are three things I love about Sukie Rougemont. One, she's basically the Carrie Bradshaw of witches — a funny and down-to-earth gossip columnist who will do anything for her friends. Two, she has no patience for seductive game-playing; instead she gives the object of the witches' affections, Darryl Van Horne, a whole lotta sass. And finally: she's responsible for what is possibly the first-ever literary reference to "Thirsty Thursdays." Sure, she still give the impression of being a little man-obsessed, but overall I think the girl really just wants material for her column.

The Witch-Queen, Stardust by Neil Gaiman

Yes, OK, the leader of The Lilim is technically not so nice. This trio is basically in the business of capturing personified fallen stars and eating their hearts in order to preserve their youth and immortality, and their leader, The Witch-Queen, will go to any evil lengths to do it. But can you really blame her? Her once-perfect kingdom was destroyed by the ocean, she lost her real name to history, and when she performs magic (basically the sole purpose of, you know, actually being a witch) she ages badly. I'd be a little crabby too.

No, you cannot dress up like Hermione Granger for every haunted occasion, (I forbid it) but Halloween does fall on a weekend this year, effectively doubling the number of costume parties you'll be attending. You might as well release your inner-Hermione at one or two of 'em. Even those who don't worship at the altar of J.K. Rowling have to admit that there's just something about Hermione — you can't help but love her.