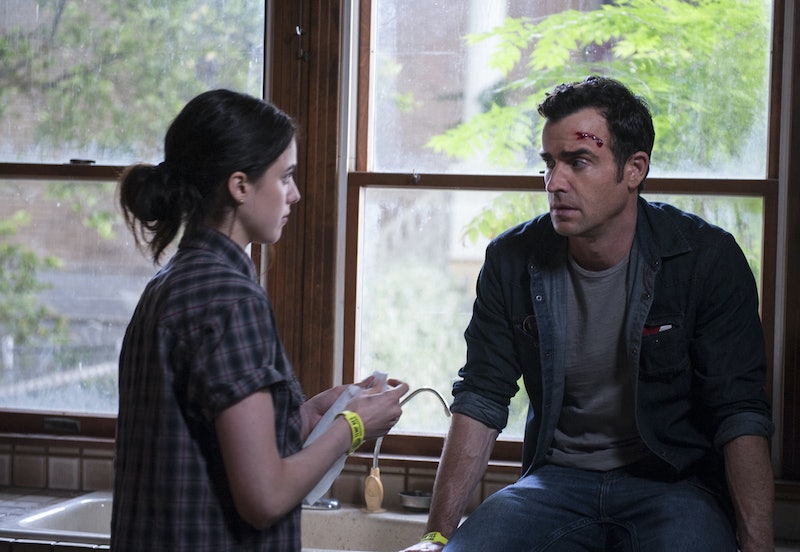 We will never find out what caused the Sudden Departure. That has been the mantra of HBO's The Leftovers since day one, so anyone who's only watching for concrete answers should probably just stop watching at this point. But, just because we'll never get a solution to, "the Sudden Departure was caused by (fill in the blank)" — God? Aliens? Micro black holes? — doesn't mean we'll never get any clues. In fact, the second episode of the show's second season gave us perhaps the biggest hint yet: Apparently the Sudden Departure had something to do with geography.

The episode, appropriately titled "A Matter Of Geography," dropped this revelation when Nora decided to sell her house and move with Kevin to Texas. A research group from MIT ended up offering her $2.7 million for the house so they could study it and determine why it was a statistical anomaly (aka why 75 percent of its inhabitants Departed instead of the worldwide average of 2 percent). When Nora asked the project leader for his best guess on what happened, he told her, "We can't determine where [they went]. Only why."

It would be simple to chalk up the Durst family's disappearance to mere coincidence if it weren't for the fact that we've already seen a similarly special location in Season 2. While Nora's house proved to be a hotbed for Departures, Jarden TX had the opposite anomaly: Not a single citizen of the town vanished on that fateful day.

What is it that makes these places special? The show is far from answering that particular question, but the title of the Season 2 premiere may have been an indication. An "Axis Mundi" is a turning point of the world — a symbolic connection between heaven and Earth. While this mysterious "connection" is as vague as it gets when it comes to explanations (about as vague as whatever made the island so "special" on Lost), at least it's a start. And, if the reason everyone in Jarden was saved is because the town is somehow connected to heaven, could the reason that Nora's entire family disappeared be the exact opposite? ...Is her house somehow connected to hell?

OK, we're getting into some Buffy-style territory here. I'm not saying that Mapleton is sitting on a literal hellmouth, but there does seem to be something special about certain places that increase or decrease the likelihood of Departures. The problem is, it seems unlikely that we'll get anymore answers, unless Nora suddenly decides to return to Mapleton to check in with the MIT scientists. The Garveys are currently more preoccupied with moving on from the events of the Sudden Departure than they are in asking questions about it, and the citizens of Jarden are more concerned with preserving whatever good fortune caused them to be spared than in opening a Pandora's box of mysteries.

Despite no one's apparent hurry to get to the bottom of the Sudden Departure, the MIT guy offers at least one compelling reason to be curious. All the characters are now living in a world where two percent of the world's population inexplicably disappeared in the blink of an eye. With the fundamental rules of reality broken, what's to stop another inexplicable event from occurring — like, say, a second Sudden Departure?

When Nora realizes that this fear is the basis of MIT's research, she asks the scientist incredulously if he thinks it could happen again. "Why wouldn't it?" is his terrifyingly sensical answer. And, while Kevin and Nora moved to Jarden for the sense of safety it provides, Evie's disappearance is a strong indication that this small Texas town is in reality no safer than anywhere else on Earth.