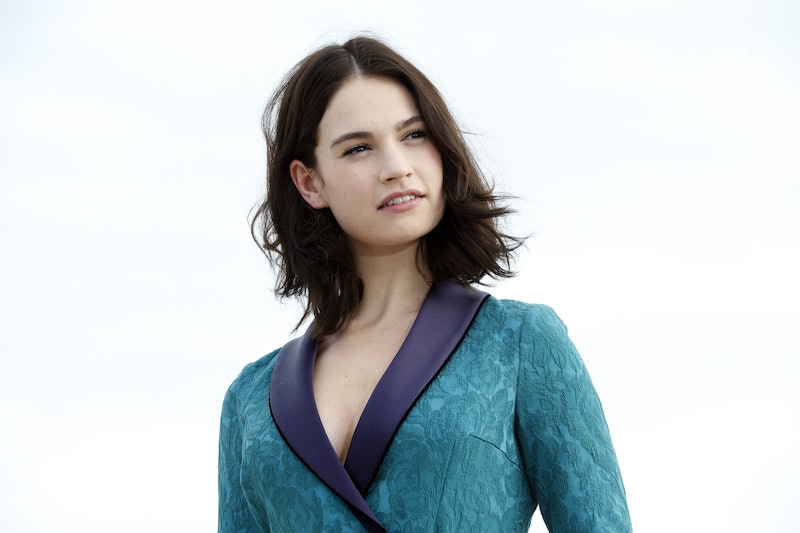 She captured just about every fashion enthusiast's heart when she Lily Collins crushed the Cinderella press tour — and while her series of on-theme princess gowns were basically the stuff of dreams, her post-Cinderella ensembles have continued to impress. Take, for instance, Comic-Con — Collins made her first non-Disney appearance wearing an absolutely gorgeous (and sultry) beaded number by Altuzarra.

Recently, she been favoring a particular designer — at two of her latest red carpet appearances, she's stunned in designs by Ulyana Sergeenko. The ever-busy Ms. James has been out and about promoting a few projects (Downton Abbey, Pride and Prejudice and Zombies, and the BBC's upcoming War and Peace mini-series, to name a few) — and she wore two absolutely gorgeous demi couture numbers by Sergeenko while she was at it.

She first wore the designer to the special BAFTA event honoring Downton Abbey — she selected a white brocade, tea-length sheath dress — and most recently, she wore Ulyana Sergeenko again while attending a photocall for War and Peace in Cannes, this time opting for a teal brocade mini dress. Both dresses had Sergeenko's trademark vintage flair, with touches of mid-century detailing (both this century and last) to really make the respective looks sing — let's take a look!

The texture of the dress, paired with the gorgeous tailoring, retro sleeves, and killer shoes really make this a look to remember (also, let's go ahead and give Collins the unofficial award for best red carpet faces ever).

At the Cannes Photocall for War and Peace

It's kind of like you took Sherlock Holmes' favorite smoking jacket, and combined it with Betty Draper's most fabulous party dress, then rendered it in beautifully saturated shades of teal and navy. It's a fun, ultra-feminine take on the menswear-inspired trend, and it goes wonderfully with her newly-darkened hair.

Here's hoping Collins decides to wear more designs from Ulyana Sergeenko, as promotions ramp up for all of her upcoming projects! Also, here's a picture of her giving the thumbs up, because that's something we all need in our lives: