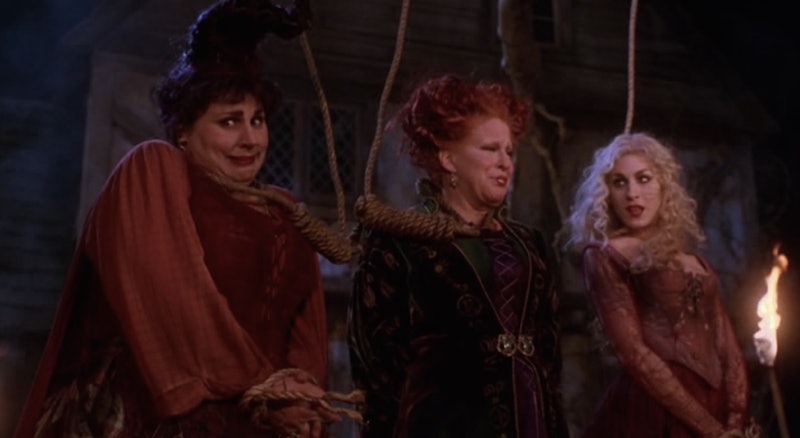 After what feels like 300 years it looks like the the Sanderson sisters are returning from the grave. You know what I mean: every October people fly into ecstasy over Hocus Pocus returning to ABC's 13 Nights of Halloween, and up until recently, I feel like I've been left out of that celebration. Somehow, I've made it to 24 without seeing the holiday cult classic, which I guess makes me a poser of Halloween fanaticism. Well, no more: at long last I finally decided to check out the film.

Now, let me be up front: I now see, with absolute clarity, why people are obsessed with it. It is a perfect film. And, if you have somehow pulled a Mary Grace and never seen it before now, I'll be brief in summarizing. Max, who is a VIRGIN, lights a candle that awakens three sister witches, and they basically want to consume the souls of children... or something. Why? The Sanderson sisters this, apparently, so they can stay young and beautiful forever, Lana Del Rey style. So Max, his little sister Dani, his crush Allison, and a talking cat/reanimated pilgrim/Timothy McGee from NCIS work to stop them.

...yeah, I'll cop to the fact that that sounds a little ridiculous on paper, but trust me: This movie is great. That said, though, it still has a few moments that are worthy of being side-eyed — so here they are, chronologically documented for your enjoyment.

The one on the right might as well be Jonathan Taylor Thomas. It's that real.

2. This Book Has An Eye And It's Made Out Of... Sewn Together Pieces Of Flesh

The true marker of a lighthearted children's film.

3. It Is The 1600s, But Winifred Is Wearing The Same Striped Tights From Hot Topic That I Wore In Seventh Grade

Oh man, it's gonna be really awkward when she's hanging there and her copy of The Downward Spiral falls out of her pocket.

4. Allison Explains The Origin Of Halloween And Everyone Applauds Her Like She Cured Cancer

This school really knows how to prioritize.

6. Hat Guy Is Definitely One Of The Most Unfortunately Dressed Characters Of All Time

7. When Dani Catches Max Hugging The Pillow And Pretending It's Allison.

8. Did I Mention The Talking Cat?

This is a thing.

9. Pretty Much Every Problem Max Has He Tries To Solve With Fire

Just of note in case there's any arsons in Salem in the near future.

10. When Your Ex Wakes You Up From The Dead Just To Make You Do Some Heavy Cardio

12. This Bus Route Apparently Takes You To "Your Most Forbidden Desires." Um.

This is a children's movie.

13. The Sandersons' Reaction To Seeing "Satan"

15. This Feels Like An Inappropriate Greeting For Your Son's New Girlfriend

Although that's an appropriate reaction to it.

16. Also, Now I Have To Picture My Own Mom Wearing a Madonna Costume

17. Anyway, Then They Break Into Song

It's the best thing to ever happen in Halloween history.

18. He Wears His Sunglasses At Night

So he can watch you weave, then breathe your story lines. You know.

19. The Sisters Explode Into Green Gas

Is that what witches are made out of?

'Cause knowledge is power!

23. Max And Co. Use Headlights To Fool The Sandersons Into Thinking It's Daylight

Which is brilliant, because everyone knows that the sun radiates with a pink glow.

Was he eating moths when he was poisoned? I don't...

25. Is This Statue Of Winnie Wearing Rouge?

27. Anyway, The Movie Ends On An Up Note, With Dani Crying Over The Corpse Of A Cat

Again. This is a children's film.