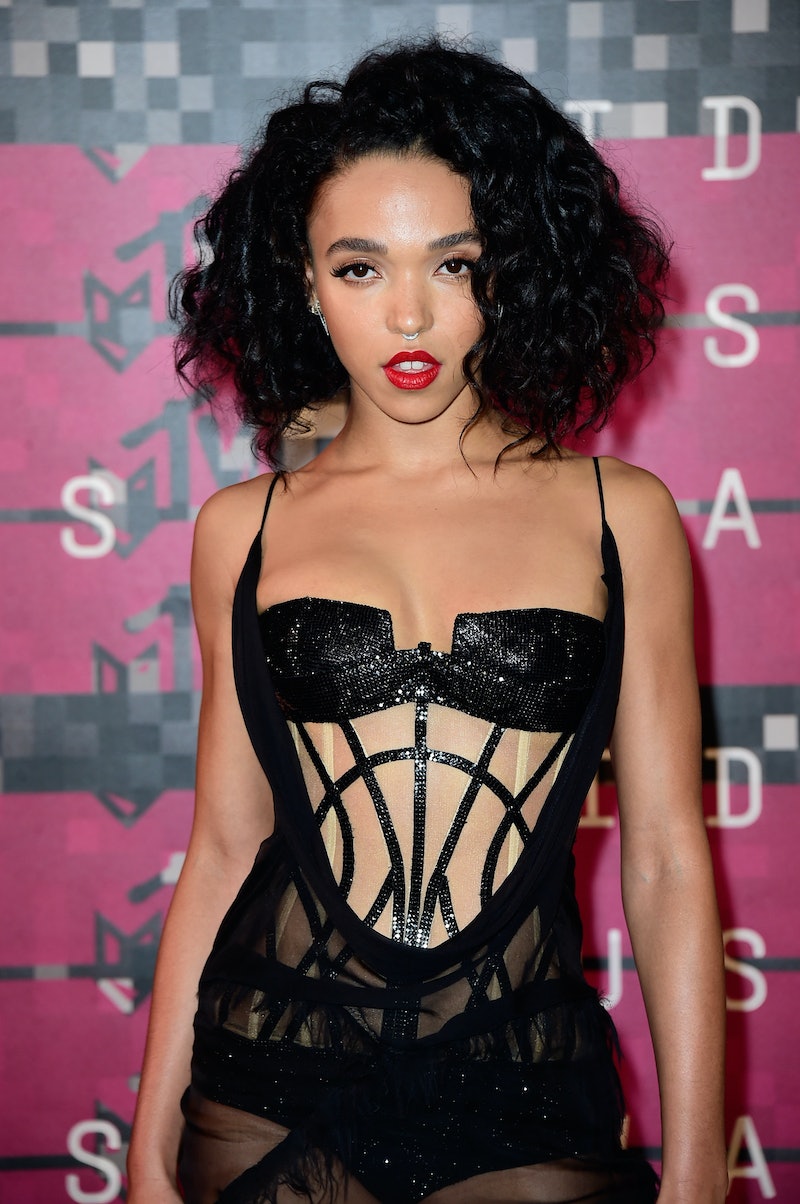 Move over Kim Kardashian, there's a new Paper magazine cover everyone's talking about. While this one might not "break the internet," you have to admit that FKA Twigs on the cover of Paper looks like a boss. On the October issue, Twigs looks so fierce and powerful dressed in a black American Apparel one-piece and a pair of Vivienne Westwood espadrilles. If the music career doesn't work out, girl definitely has a future in modeling.

The British singer-songwriter, who's real name is Tahliah Debrett Barnett, posed for Paper Magazine's Nowstalgia issue and showed off her seriously strong body in a black bodysuit, a pair of wedges (that do not seem like the ideal shoes to wear while doing the ballet pose she is doing), along with some BVLA earrings and her signature septum ring.

In the article, FKA Twigs talks about how she is looking forward to a traditional life, where she gets married and has children — perhaps this is a nod to her future life with fiance Robert Pattinson?

"I grew up in Gloucestershire, and there's a certain format that people fit into. I'm actually quite happy with the format," FKA Twigs explained to Paper Magazine . "I'm quite happy to say, ‘Go to school, work hard on your GCSEs, do your A-Levels, get married, have children. Send your kids to a nice school.'"

FKA Twigs isn't exactly known for being — or dressing — traditional. She did, after all, wear a dress with a penis on it to this year's Met Gala, so in comparison, this Paper Magazine cover ensemble looks pretty tame, but she definitely looks flawless, strong and inspiring.

While this cover is absolutely breathtaking, it comes as no surprise. FKA Twigs is a cover superstar. All of her magazine photo shoots are the perfect balance of artsy and beautiful and perfectly represent who she is as a musician.

At first glance, on the cover of i-D, FKA Twigs looks super tough. Then you realize that her forehead tattoo reads "love" and it softens her image just a bit.

On Dazed, FKA Twigs gives us the same attitude — sweet, but sassy. I wish she'd wear her hair in an afro more often!

Perhaps it's the nude and neutral color palette or her near makeup-free face, but this is definitely the sweetest of FKA Twigs' cover.

I love this close-up photo of FKA Twigs on the cover of Complex. I also love that they didn't photoshop her freckles out.

I know this won't be the last cover for the 27 year old, and I absolutely can't wait for what's to come.