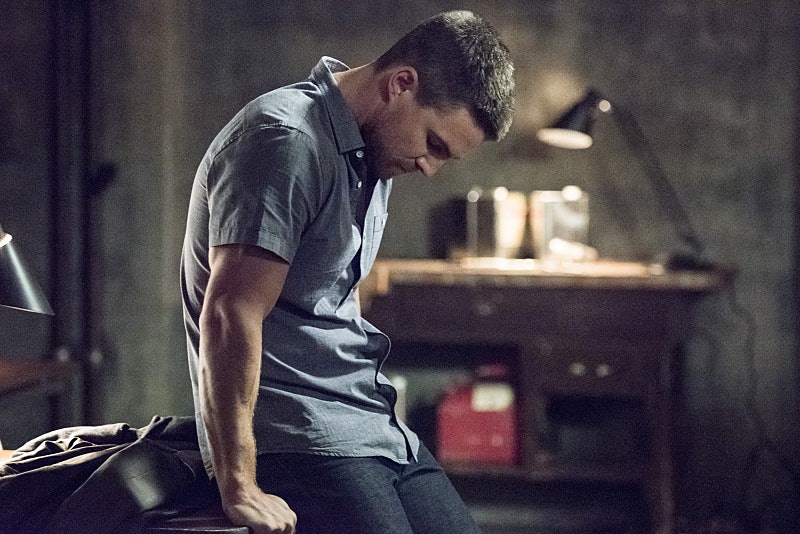 Hey, remember how the first few minutes of the Arrow Season 4 premiere were full of Olicity happiness and suburban bliss? Yeah, those were good times. Then the final few moments of "Green Arrow" changed the entire course of how we'll few this season. Because, thanks to a brief, but oh-so-important time jump, we know that six months from now will mark the death of a beloved character. And while that thought is devastating enough by itself, the only thing worse about it is that we have absolutely no idea who it is. So that leaves us with one very big question that's sure to haunt us for the rest of the season: who dies in the Arrow Season 4 time jump?

Let's start with what we know, shall we? We know that Team Arrow (or should I now be saying Team Green Arrow?) are gearing up to face off against Damien Darhk and his H.I.V.E. of agents. We know that Lance has now somehow aligned himself with these assassins. We know that this ends with Oliver standing over someone's grave, alongside Barry Allen, looking positively devastated. So who would warrant such a reaction from our beloved vigilante?

Sure, there are a few people that fit this particular bill. Thea, Diggle, and Felicity immediately come to mind. But I'm also wondering whether or not the "quick" appearance of The Flash was meant to be some sort of clue as well. Was he just showing up to support Oliver or did he stop by the grave to pay his respects? If the latter is true, then there's only one person who shares such a strong bond with both vigilantes and that's our beloved Felicity Smoak.

Believe me, I do not want this to be true. The thought of Felicity ending up in that grave is difficult to even type, let alone say out loud. However, I can't shake this feeling that her fate has just been sealed. She's the key to Oliver's happiness, thus making her an ideal target, which means that her demise could be the very thing that forces this "hopeful" Green Arrow to spiral back down the path of darkness. Let's hope that I'm wrong…