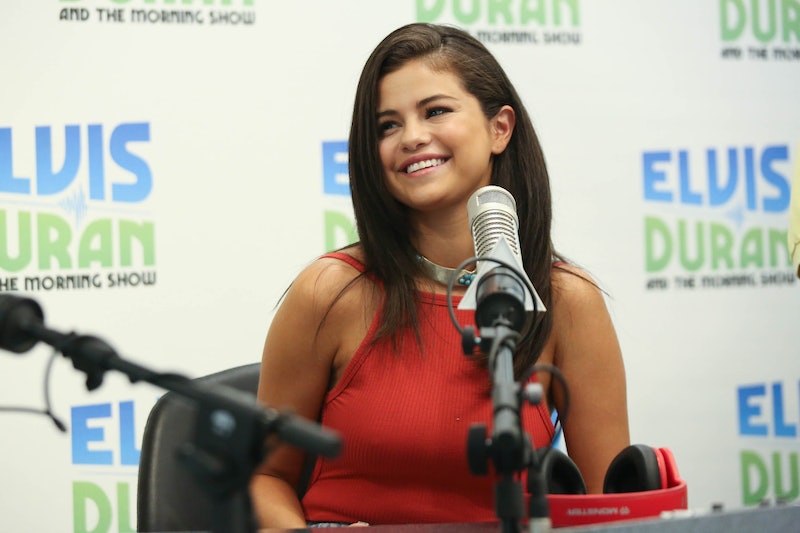 The sheer amount of bravery and confidence that Selena Gomez showed on Wednesday is so inspiring that I can hardly even imagine it. On Wednesday, Gomez admitted she had been diagnosed with lupus and had undergone chemotherapy for the incurable illness during her break from Hollywood — you know, the break and rehab stay widely attributed to heartache over her breakup with Justin Bieber. (And, yes, in case you're wondering, the pop star seriously does not appreciate that she became cannon fodder for gossip blogs during her time dealing with such a serious health scare.) As every Gomez fan knows, the pop star is only one day away from the release of her album Revival, and the album title seems to have an entirely new meaning in light of her confession. Is Revival about Gomez's lupus diagnosis?

To be honest, the album title has more meanings than one. While there may be songs on the album that reference the illness, or that are a powerful anthem for anyone, anywhere who is struggling with something beyond their control, the title itself doesn't necessarily only apply to the diagnosis. Now that we're aware of what Gomez has been going through, we can certainly tack that onto the list of meanings we can glean from Revival, but it's only when all the components are put together that we get a true sketch for what Gomez is planning, or trying, to tell us with her music.

“I was really fighting for this transition. Ultimately, I’m not 16 anymore. I’m a young woman, and I’m growing up and trying to do it in a way I feel comfortable with.”

It's been a while since Gomez has released a new album — understandably so. Prior to Revival, she released a singles album called For You with Hollywood Records which included the new, Justin Bieber-referencing song, "The Heart Wants What It Wants." However, Gomez was just fulfilling contractional obligations with that album, and now her new music is her way of showing the world the kind of performer that she wants to be going forward. In her own words, this music is her transitioning into a mature adult who is growing and changing and who wants her music and her fan base to grow and change with her. She might be young, but Gomez's career is already in need of a revival, and this is going to be the album to do it.

"I think after four albums, I finally feel a little more like myself than I ever have... This is now a point in my life where I have experienced friendships or relationships or travel or exploring, it’s really fun."

Even before the revelation of her diagnosis, we all knew that Gomez had gone through a lot. Her stay in rebab for what was at the time said to be exhaustion was more than enough proof of that. Anyone who has ever watched Gomez cry on stage as she thanked her fans for their support knows that she is the kind of person who feels the things that she feels very deeply, and who cares very much about her work, about the people in her life, and about the people who have supported her along the way. However, she is approaching her natural empathy with a new armor of confidence that seems to be making her happier and healthier than ever before. She is having fun, seeing the light through the darkness, and has come back stronger than ever before with an all new outlook on life to share with her fans.

"The hate [over how the media treated her during her recovery] motivated me. This is my time. I’ve deserved this. I earned it. This is all me."

Finally, we come to the new layer to the album's title that none of us had imagined prior to Gomez's interview. Revival is going to be a personal and confessional album that not only introduces Gomez's new style to the world, but is her way of dealing with all of the emotions — positive and negative — that she has felt since her debut album Stars Dance. And those negative emotions include the pain of her recovery and her anger over the media that she perceives as being toxic to that recovery by coming up with every explanation that they could for her personal struggles — every explanation but the truth. Gomez is in a good place, emotionally, mentally, and physically, and she's ready to tell her story in her own voice, to move forward in her career in her own way. A revival of her voice that gives her control of her narrative is always welcome.

There are many more meanings that could be buried in the Revival title, but I think we can at least say there's one thing that the album doesn't mean: there is no need for any romantic revivals here. This new music is about Gomez, and no one else.

More like this
Selena Gomez Explained Why A Past Album Cover Made Her Feel “Really Ashamed”
By Grace Wehniainen
Selena Gomez Is Fine Being Single, But She Still Manifested Romance On 'SNL'
By Martha Sorren, Jake Viswanath and Jack Irvin
Lily Allen Was “Quite Emosh” After Performing Sober At Glastonbury Festival
By Stephanie Topacio Long
Here’s How Lizzo Is Supporting Abortion Rights After The Roe v. Wade Reversal
By Brad Witter
Get Even More From Bustle — Sign Up For The Newsletter