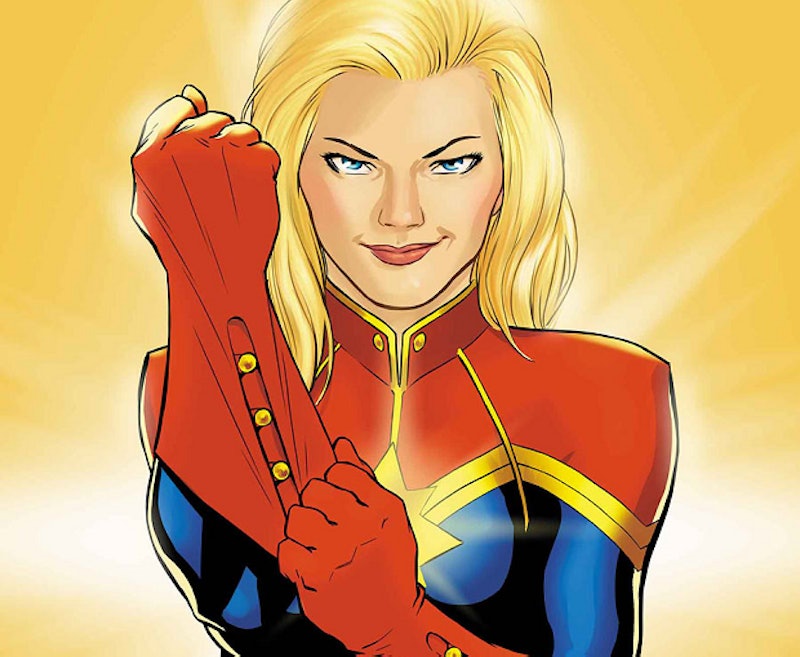 In Thursday's edition of bizarro world news, Marvel has pushed back Captain Marvel in order to squeeze an Ant-Man sequel into Phase Three. On the upside, the sequel is called Ant-Man and the Wasp , which means technically the Wasp will become the first female superhero in the Marvel movieverse to receive top billing — although it seems as if Hope Van Dyne's Wasp is still riding shotgun to Scott Lang's Ant-Man since his name precedes hers in the title. The sequel will drop on July 6, 2018, which in turn pushes Captain Marvel back to March 8, 2019. For those keeping count, that means it will be right at four years before a female superhero film hits theaters.

Ant-Man was a box office success and, since studios love nothing more than franchises, it makes fiscal sense to rush another Ant-Man movie into production. I suspect Marvel thought attaching the Wasp to the title would appease fans who are wondering why the studio is offering up a second Ant-Man, a third Captain America, a third Thor, a second Guardians of the Galaxy, another Avengers, and a Spider-Man movie before they release their first solo female superhero movie. I do not feel appeased. I just feel sad at the amount of waiting that I have to do, which is now even more waiting than I was originally prepared for.

There is a need for superhero movies featuring female heroes that is not being met. The fact that Ant-Man will have two movies before Black Widow gets one is beyond frustrating (she was an established character in the MCU long before Scott and his ant controlling powers came along). What made the original Iron Man so thrilling was that it signified Marvel was a studio willing to take risks, to make a new kind of superhero movie — but with success has come complacency. At this point, they know fans will show up for whatever male hero they toss out there, no matter how obscure, because the Marvel name means something not just to comic book fans, but to kids, families, and movie lovers. What I would love for Marvel to realize is a good portion of their fans — young, old, and everything in between — are women.

It is frustrating to show up to these movies and see powerful, fascinating female heroes basically become background players. The Wasp was one of the best things about Ant-Man, and I am happy to see Marvel adding her name to the title because at least it acknowledges her importance to the plot. At this point, however, it is not enough for me though. Does adding her name mean she will have a more substantial role? Does it guarantee this movie will be as much her journey as it is Ant-Man's? No, it does not. Not necessarily.

I want to see Captain Marvel. I want to know Marvel can actually make a female superhero movie without having a male lead's name front and center. Knowing the next four years is going to bring more of the same from Marvel is depressing. It's amazing that the Wasp is their first top-billed heroine, but it doesn't change the fact that, in a year when fans have questioned everything from the lack of Black Widow merchandise to the shoehorned love story featuring Black Widow and Bruce Banner in Avengers: Age of Ultron, pushing back Captain Marvel is a terrible idea unless the movie you are pushing it back for is called Black Widow.

The opportunity to do something fresh and new is there, but instead Carol Danvers is being shoved aside so Paul Rudd can quip at ants some more. This is a sad day to be a superhero fan, especially one who would love just once to know her voice counts as much as everyone else's. See you in 2019, Captain Marvel. I hope.