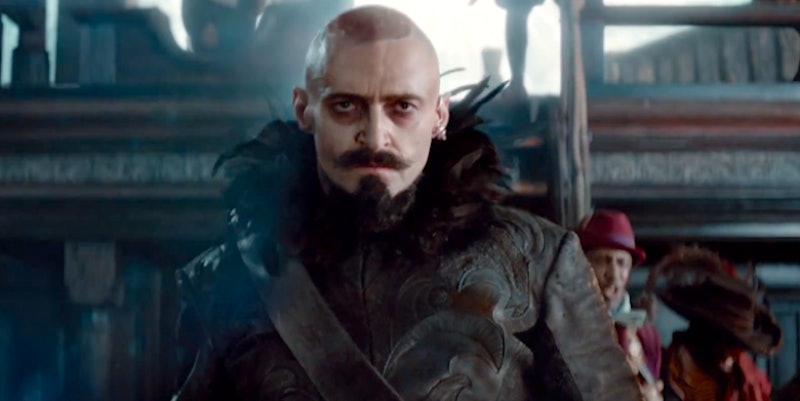 If you hadn't already guessed, Pan is not your traditional retelling of the beloved children's story Peter Pan. Garrett Hedlund plays Captain Hook, creating some uncomfortable cognitive dissonance by how good he looks as the villain from your childhood. Rooney Mara plays Tiger Lily, a move that garnered the film some controversy early on. Also making an unanticipated appearance is Hugh Jackman as Blackbeard, who hasn't been present in previous representations of Neverland. Oh, and the pirates sing Nirvana — yes, you read that correctly. There is a rousing rendition of "Smells Like Teen Spirit" in Pan , serving as an anthem to accompany the pirates' initial introduction.

If you think it's a weird choice, you're not the only one. Hugh Jackman acknowledged the strangeness of the song's presence in the film, explaining to King5 News how the grunge interlude came to be. "We were doing pirate boot camp," the actor said. "We were in our characters about 10 hours a day and we started our day by singing songs. So we brought in all these pirates songs— 'ho ho ho', sea shanties— and it just wasn't jelling. So on the third day Joe [Director Joe Wright] brought in Nirvana's 'Teen Spirit' and 'Blitzkrieg Bop' and man, it was like we were shot out by a rocket. And Joe goes 'That's gonna be the entrance'. And I remember looking at the Warner Brothers executives who were like, 'Uh, are we doing a musical?' But it was perfect."

Interestingly, Pan isn't even the first movie to use Smells Like Teen Spirit in a totally out-of-context manner. Here are a few films that unexpectedly included the famous track.

I didn't understand this scene when I saw the movie in 2011, and I don't understand it now. The Muppets sing a barbershop quartet version of "Smells Like Teen Spirit" while giving Jack Black a non-consensual haircut and shave, which inexplicably results in his head shrinking. But because it's the Muppets, it's oddly charming instead of creepy AF.

In this horror film made up entirely of found footage, there is a cover of "Smells Like Teen Spirit" which sounds like something you'd hear at open mic night at a Bushwick juice cafe. But hey, whatever floats your boat.

Oddly, the song's refrain actually kind of works in this introductory scene to the French nightclub (and all the debauchery therein). Given, the actual Moulin Rouge was at its height of activity a solid century before Nevermind was released, but that somehow seems like a minor detail given how zany the movie is as a whole.

So Pan isn't the first film to channel Nirvana for cinematic purposes, but does it do so successfully? Critics so far haven't been kind, but it could still be worth it to see a unique take on a familiar story that its stars clearly had a blast making.

More like this
Hugh Jackman & Deborra-Lee Furness’ Relationship Timeline Started With A Mutual Crush
By Hugh McIntyre
Everything To Know About 'My Big Fat Greek Wedding 3'
By Grace Wehniainen
Alicia Silverstone Has Recreated An Iconic 'Clueless' Scene
By Frances Stewart
Emma Thompson, Lashana Lynch, & Stephen Graham Lead Netflix’s 'Matilda'
By Sophie McEvoy
Get Even More From Bustle — Sign Up For The Newsletter