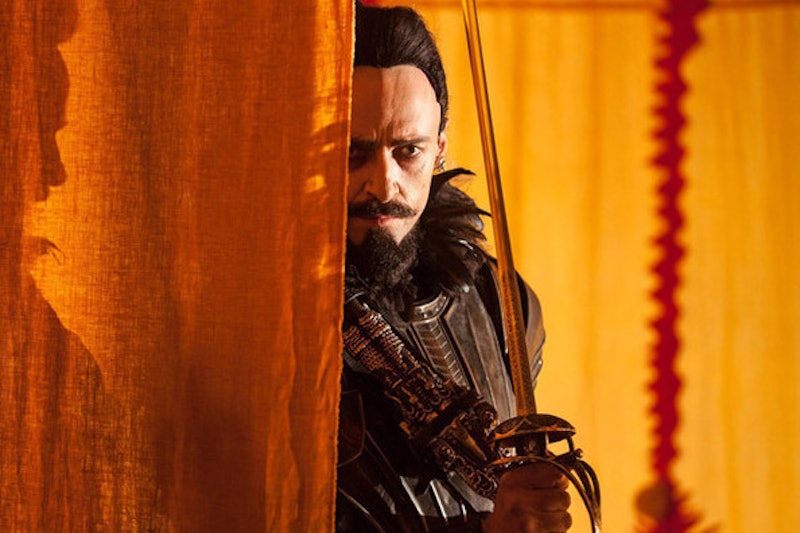 The new film Pan tells the familiar story of Peter Pan. You know the one: Peter Pan is a boy who never grows up and lives in a magical place called Neverland and has a best friend named Hook and fights an evil pirate named Blackbeard and... wait, what? Yes, this version of the classic tale is a little different than most other iterations. Instead of Pan facing off against his nemesis Captain Hook, this story reimagines Pan's story as a prequel, where he and James Hook befriend one another and team up against Blackbeard the pirate. But if you're not a Pan expert and wondering who Blackbeard is, don't worry: you're not alone. But you do have a lot to learn.

In Pan, Captain Blackbeard, portrayed by Hugh Jackman, is the leader of a villainous band of flying pirates wreaking havoc on Neverland. James Hook is a heroic miner in this version of the story (at least to start), and he has not yet become the treacherous Captain Hook everyone knows and loves to hate. Fans know that Hook eventually becomes a ruthless pirate captain and the archenemy of Peter Pan, but his origins have never really been explored to the extent that they are here. Perhaps he learns a few tricks of the trade from Blackbeard, which would actually make sense in Peter Pan lore.

In the original Peter Pan novel, first published in 1911, Captain Hook is said to have been the boatswain of Blackbeard. A boatswain is an important member of a ship's crew and is responsible for the ship's hull. So it's safe to say that Hook was a pretty prominent member of Blackbeard's gang. This likely served as the basis for Blackbeard's inclusion in Pan, but it also is interesting in that it mixes history with fiction. For you see, Captain Hook may not be a real person, but Captain Blackbeard definitely was.

Blackbeard, whose real name was Edward Teach, is probably the most notorious pirate who ever lived. He was born in Britain around 1680, and worked on a British privateer in Jamaica as a young man. During the War of the Spanish Succession, privateers were allowed by the motherland to rob and plunder Spanish and French ships without being criminalized for it, and Teach developed a knack for piracy. He eventually joined up with a crew of Caribbean pirates and subsequently became their leader. He stole a large French ship and renamed it Queen Anne's Revenge, fortifying it with weaponry to become one of the most-feared in the sea and the chief ship among his growing fleet. He terrorized the Caribbean and the East Coast of the future U.S. beginning around 1716, amassing wealth and spreading fear.

His moniker came from his epic beard, which was said to have been extremely long and so full that it reached his eyes. He would keep it in braids and tie it full of black ribbons, clearly taking pride in himself as a beardsman. He also would stick lit matches under his hat when heading to battle, in order to give himself a more frightful and demonic appearance. In one of his more memorable acts, he held the entire city of Charleston, South Carolina for ransom in 1718, and was successful in making them pay it.

Blackbeard's reign of terror ended in November of 1718, when he was hunted down by Lieutenant Robert Maynard of the Royal Navy. Maynard caught up with Blackbeard off the North Carolina coast, and a battle ensued. Maynard lost a third of his men to gunfire from Blackbeard's ship before coming on board, where the rest of the fighting took place on deck. Blackbeard and Maynard actually ended up squaring off against one another, and Blackbeard broke Maynard's sword with his own. But before the pirate could do any more damage, he was overtaken and killed by Maynard's men. An examination of Blackbeard's body revealed he had been shot five times and stabbed 20 more before he gave in, and his head was hung from Maynard's ship as a trophy.

Obviously, Blackbeard was a larger-than-life character, so it's no wonder the producers of Pan have decided to place him in Neverland. The guy is one of the world's most storied villains, and his appearance in Pan should only add to his legend.