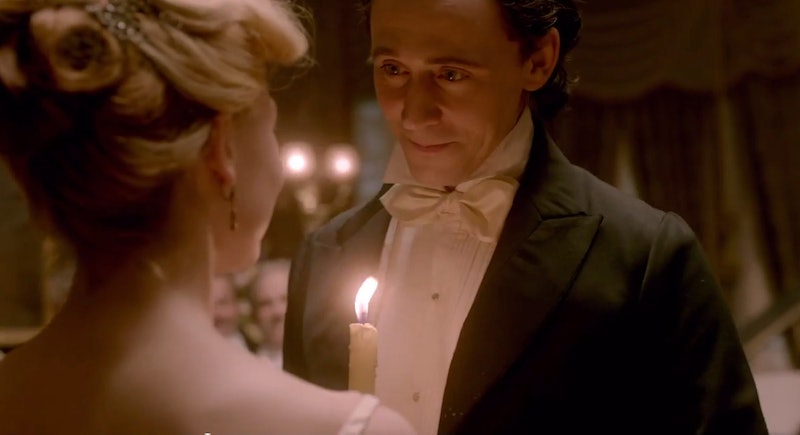 There are just a few short months left until fans get to see Tom Hiddleston in Crimson Peak. Come October, all his Victorian-era gothic horror film perfection will be on full display. But, for now, Hiddlestoners can tide themselves over with the new Crimson Peak trailer. The director was even so kind as to cut two different versions of the trailer. That means we're privy to five whole minutes of new Hiddleston footage. This is a good day.

Now, I know that Crimson Peak is going to be terrifying (Stephen King himself said so), but it's also going to be filled with plenty of glorious Hiddleston. As Thomas Sharpe, we get to see him fall in love with Mia Wasikowska's Edith Cushing and bring her back to his really, really creepy home to meet his really, really creepy sister (Jessica Chastain). Not much else is known about the exact plot other than it involves a house that's haunted and pissed about something, and it also includes a Hiddleston sex scene. (The international trailer has a brief shot of his butt and everything.)

So while we wait for the official film, here's everything I learned about the movie while paying attention to Tom Hiddleston's 14 best moments in the trailer.

You have my attention.

And Then His Whole Body

They Had A Fireside Date

Warm up with a steaming hot Hiddleston.

He Gave A Warning Not To Go To Certain Floors

Is this like an Albus Dumbledore warning where you're actually supposed to do what he's forbidding you from doing?

We Saw An Old-Timey Glamour Shot

In context, I bet this picture is creepy, but really I can only focus on how attractive his face is.

There Was An Aggressive Elevator Effort

No one opens elevators better than an angry Hiddleston.

And An Intense Hiddles Glare

Bless the apparent Hiddlestoner that compiled this trailer.

Then He Read Some Bad Writing

Edward: "It's, um, rather good, don't you think?" Edith: "Really?" Gurl, please. Obviously, he was being sarcastic.

"I Can't Stop Thinking About How Bad That Writing Was..."

Would be what he would say if I was writing this film.

But They Hugged It Out

And He Flashed That Charming Hiddleston Smile

Oh, you want me to move into a haunted house? Anything for that grin.

Hello New Wife, Welcome To The House Of Your Nightmares

Enjoy your stay... it's FOREVER!

And Then She Had Some Hiddles Sexy Time

Suddenly, all that terrifying ghost stuff is totally worth it.

More like this
Jennifer Coolidge Hunted For Jewels & Lashes In J.Lo’s Hotel Room
By Jake Viswanath
Bennifer's Relationship Timeline Now Includes A Grammy Date Night
By Jake Viswanath
What Is Mary J. Blige’s Net Worth? The 9-Time Grammy Winner Is Doing “Just Fine”
By Hugh McIntyre
Taylor Lautner Copped To Finding Jacob "A Little Annoying" In Twilight
By Stephanie Topacio Long
Get Even More From Bustle — Sign Up For The Newsletter
From hair trends to relationship advice, our daily newsletter has everything you need to sound like a person who’s on TikTok, even if you aren’t.