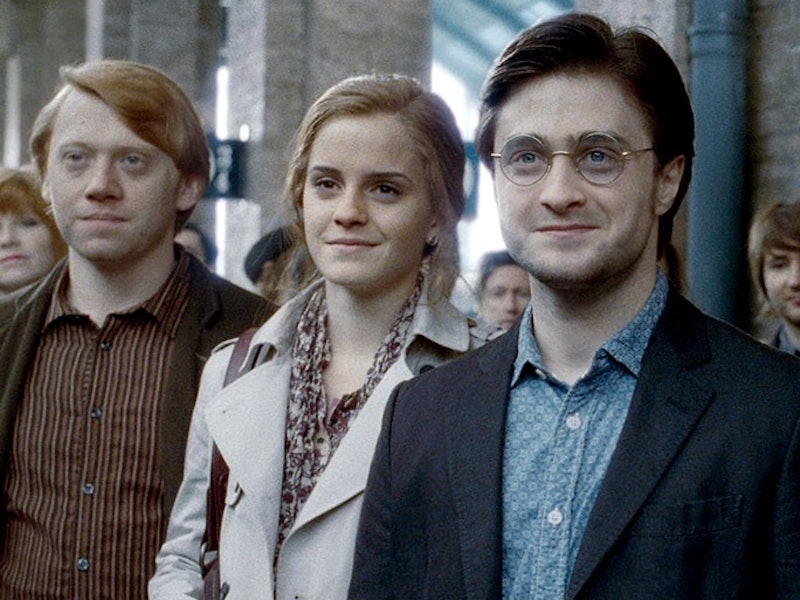 I was 8 years old when Harry Potter and the Sorcerer's Stone was published in the United States. I had just moved to a new town and was starting second grade in an unfamiliar place surrounded by unfamiliar people. I was shy and scared and still pretty angry at my parents for making us move, not to mention completely nervous about being "the new girl" in school. Just before my first day, my aunt stopped by my house to give me something she said would help: a book by an author called J.K. Rowling.

I had always been a big reader, but when my aunt handed me the first installment in what would become my all-time favorite series, I could practically feel the magic. The cover, the illustrated title pages, the summary on the back — I knew I was holding something special, and for the next few days after school, I devoured every word, finding comfort in a story that was so unlike my own yet so relatable. It was official: I was hooked on Harry Potter, and over the next nine years the Harry Potter books were by my side through it all. The books completely changed my life as a kid, from that first day at a new school to my high school graduation, but I don't think I realized just how much Harry Potter would effect me as an adult.

Like many other beloved books, J.K. Rowling's series shaped the person I am today, and if you were lucky enough to read them while you were growing up, you know exactly what I mean. Here are 13 ways reading Harry Potter as a kid made you the adult you are today:

They Taught You To Have Patience — A Lot Of It

Growing up while the Harry Potter books were being written and published was an amazing experience, because it was like watching magic unfold before your eyes. Do you know what else it was like? Excruciating torture. When you got to the end of a book, you couldn't just pick up the next one — you had to wait months, years, until you could continue Harry's journey, but you learned to be patient about it. Because the truth is, no matter how long you had wait, it was always worth it. Now as an adult, your patience never runs thin.

Thanks To The Series, You're Still A Big Reader

From story time to book reports to independent reading, books are a big part of childhood. Reading Harry Potter growing up, however, ensured that you would be a reader for life. Because of the great storytelling and unforgettable characters, Harry Potter made you appreciate books and showed you all they have to offer. Thanks to the HP series, you became an avid adult reader, too.

Harry, Ron, And Hermione Made You Into A Loyal Friend

If you read Harry Potter as a kid, then you knew from a young age how important loyalty in friendship is. You learned to stick by your pals through thick and thin, and that's a lesson that stays with you. Even though you aren't making friendship pacts under the jungle gym at recess anymore, you are a loyal and trusting friend as an adult, too.

Imagination Isn't Something You Left Behind In Childhood

Reading anything as you grow up helps to expand your imagination, but that becomes especially true when you talk about a series as wondrous as Harry Potter. Each book held so much magic and adventure that your young mind was molded to be even more creative and imaginative. As you grew up, that imagination grew up with you, and as an adult, it's bigger than ever.

Whether you're riding a roller coaster or interviewing for your dream job, you are fearless, and you can thank Harry Potter for that. Reading about the courageous acts and unlimited bravery of Harry, Ron, and Hermione showed you that when you don't let fear get in the way, you can accomplish anything. Now, you're one brave ass adult, and not even your future in-laws can scare you.

Harry And The Gang Helped You Follow Your Passion

If you read Harry Potter as a kid, then chances are that after graduating, you didn't settle on the first job you found, but instead followed your dreams. From the Weasley twins to Harry himself, the books showed your young self how important it is to love what you do and do what you love. As an adult, you're still doing what you're passionate about in your professional and personal life, and you're absolutely loving in.

They Made It Okay For You To Embraced Your Inner Nerd

Everyone around you read Harry Potter growing up, and they actually made it cool to be a book nerd. You never had to hide your love for reading when you were talking about any of the Harry Potter books, and eventually you learned to accept your inner nerdiness. You celebrate it, actually, because you're an adult now and you can be as nerdy as you want.

You Always Fight For What — Or Who — You Love, Because Harry Always Did

When his friends and loved ones were in danger, did Harry run away? Hell no! He stood up and fought to protect all of those who mattered to him, despite the threat of death. With that kind of example being set, is it all that surprising that as an adult you are a lover and a fighter, too? You don't back down when someone of something you love hang in the balance. Harry taught you better than that.

Because Of The Books, You're Inquisitive

There are those adults who go through the motions of life — school, marriage, job, retirement — without creating a stir, but you are not one of those adults. The books made you question everything as a kid, and that made you an inquisitive adult who isn't satisfied with the status quo, even if that means making waves along the way.

Reading The Harry Potter Books Made You More Determined

Remember when your scrawny adolescent arms could barely hold all 734 pages of Harry Potter and the Goblet of Fire? That didn't stop you from reading every last word, most of which you had to sound out because they were brand new and totally made up. Thanks to the Harry Potter books, you're trained in determination.

If no one will give up their seat on the subway for the very pregnant woman next to you, there's no way you're going to let that stand, because you can't abide by injustices, no matter how big or small. Reading the Harry Potter books as a kid inspired you to be a better person, the kind of person who refuses to sit back and watch wrongs being done unto others. You stand up for the little guy, even if you are the little guy.

When you moved away from home for the first time, you might have felt a little lonely and homesick. Then you remembered something: even though Harry never got to know his parents, he was never without a family because he surrounded himself with people he loved. Once you met new people and made new friends away from home, you were able to make your own makeshift family, so, like Harry, you never really felt alone.

Even Though You're An Adult, The Harry Potter Books Allow You To Never Really Grown Up

The biggest way the Harry Potter books shaped the adult you are today is by allowing you to stay a kid at heart. The books have been and always will be a great escape from the real world and an excuse to still believe in magic. You read them as a kid, you still love them as an adult, and when it comes to the Harry Potter books, you'll always be that 11-year-old waiting for your Hogwarts acceptance letter.