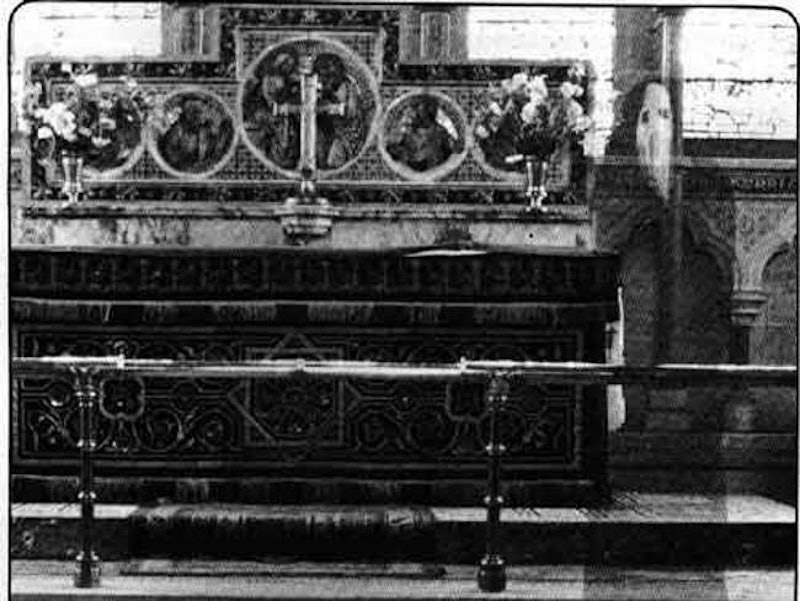 In the 19th century, when the very first photographs were being made, people felt that photography's advantages as a medium over drawings and engravings (the primary previous methods of conveying visual information) were breathtaking. And most people were convinced that photography's biggest virtue was that a camera couldn't be fooled. This is why many photographs of the time that claimed to document paranormal activity were taken as gospel proof of the existence of ghosts or other creatures — though now, of course, many of them can be easily explained by double exposures, accidental tampering, or just plain old trickery motivated by greed.

Many of the six creepy vintage supernatural photos below may look a bit weird (or even unquestionably fake) to us today. But at the time they were considered incredibly moving, horrifically creepy, and taken by many as serious evidence of a world beyond our own. These photos are some of the most famous examples of their kind — and in some cases, they've been creeping out viewers for more than a hundred years.

And even though they've probably stopped terrifying anyone into believing that they're real, they've got a spooky legacy that lasts to this day, through our own YouTube ghost videos and claims of ghosts caught on social media.

The "Brown Lady" is an interesting case of a photograph playing into an already-existing ghost story. The theory that a female ghost haunted the rooms of Raynam Hall, an ancestral home in Britain, had been around for several centuries before the photograph of the "Brown Lady" was taken in 1936. According to the records, it was believed to be Lady Dorothy Montagu, who had died there in the 18th century. The 1936 photograph was taken by several photographers from the magazine Country Life, who had come to make a photo essay on the lush interiors of the house.

By the '30s, people were a bit cannier about photographic fakery than they had been in the previous century, so the negative and photograph itself have been the subject of argument for years, with people suggesting that either deliberate tampering or some kind of accidental problem with the film or exposure led to the image of the ghostly "lady" in the center of the photo. But even though it's most likely a fake, you have to admit: it's one hell of a creepy photo.

2. The Spectre Of Newby

The Reverend K. F. Lord took this photograph in 1963, and while it appears obvious to us today that it's actually a result of double exposure or film tampering, the basic facts of the case — a reverend taking photographs inside a chapel and finding what looks like a monk on his film — plus the seriously skin-crawling quality of the finished article made the photograph an instant cult hit.

The scale of the photograph doesn't quite reveal, on first glance, the real weirdness of the ghostly figure. However, the size of the actual stuff around him/her/it (it's the interior of Newby Chapel in Yorkshire, England) indicates that this spectre would have to be at least 9 feet tall to fit in the frame like that. And is the resemblance to the later Scream villains a coincidence?

England appears to be a world leader in ghost photography so eerie that it makes your skin want to get up and go into another room. This UK photograph, taken in 1966, is so famous that the famous house in which it was taken, the Queen's House in Greenwich, features its story on its website.

The picture was taken on the house's Tulip Staircase by two retirees from Canada, who'd come to England to see some pretty interiors. However, they didn't bargain for this ghostly apparition, which appears to be climbing up the staircase in the resulting photograph. They later tried to recreate the photograph with the museum's photographer, but couldn't get the same strange effects. (Interestingly, Queen's House was apparently built for Queen Anne of Denmark as an apology by her husband, King James I. His offence? Swearing at her after she accidentally shot one of his dogs. Maybe it's a dog's ghost climbing the stairs.)

One of the most famous supernatural hoaxes in history, the Cottingley fairies (the subject of five different photographs taken by two small girls in 1917) look childishly simple today — they're clearly paper cut-outs arranged around a child's face ‚ but in their time they caused a massive public furor. The venerable author of Sherlock Holmes, Arthur Conan Doyle, was absolutely convinced that they were real (though illusionist Harry Houdini, understandably, was not so sure). It's no wonder that a lot of people weren't thrilled about this photo — can you imagine believing that your garden's full of tiny winged adults who spend their time frolicking with your children? You'd call the police and demand a 24-hour guard in the petunias.

Spirit photography — a practice which involved "capturing" images of deceased family members by using a psychic medium and a camera — is a particularly creepy part of photographic history. Not only are the ghosts frankly rather upsetting-looking, but the idea of exploiting peoples' grief with made-up photographic trickery is grim on about eight different levels. Nevertheless, it was an incredibly popular activity in the late 19th and early 20th centuries, and photographer William Hope was a serious expert in the field, conjuring visions of the dead through double exposures and other tricks that fooled grieving families after World War I.

Mary Todd Lincoln is probably the most famous spirit photography client in history. Several years after her husband was assassinated in 1865, she visited William H. Mumler — a spirit photographer who'd gained prominence by producing "photographs" of people killed in the American Civil War — in an attempt to find some photographic proof that her husband's spirit remained.

Her rigid, saddened face staring out of the 1871 photograph, coupled with her husband's creepy "hands" on her shoulders and Lincoln looming from the background with a vaguely distinguishable beard and benevolent expression, add up to one of the most bizarrely upsetting pictures in history. Luckily, Mumler — who had already weathered lawsuits that claimed him a fraud — quit producing spirit photography in 1879.

It's easy to look at these photos today and laugh — but the next time you find yourself getting creeped out by a ghost video that a friend has posted on social media, remember that you're part of a long legacy of people getting freaked out by spooky images produced by the technology of their era (and that the next generation may find it pretty laughable that you thought that video of the ghost at the gas station seemed real).