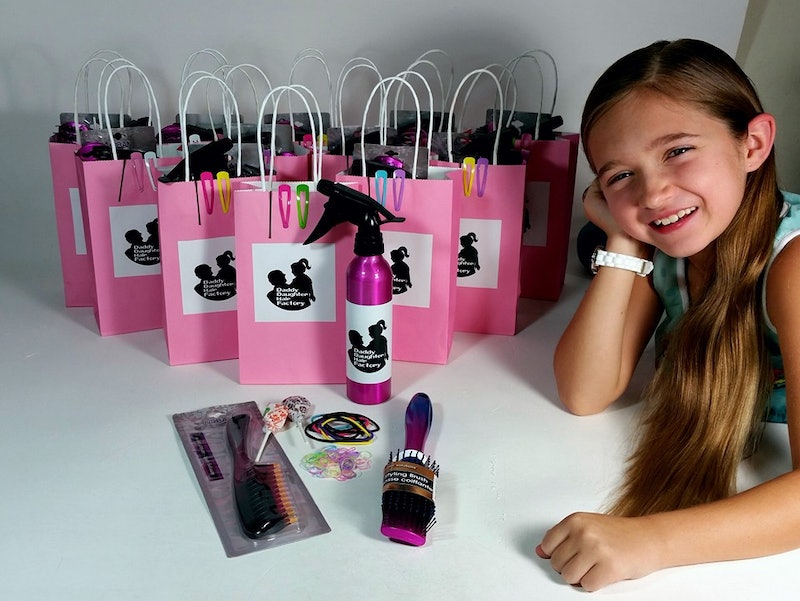 It’s no secret single parents have a tough gig — one that sometimes requires playing dual roles and stepping outside their comfort zones. Take single dad Philippe Morgese of Florida, who was left to care for his then one-year-old daughter Emma on his own many years ago, and discovered he had no idea what to do with her hair. Not wanting her to go through her young life with messy ponytails, he googled his way to some online hair tutorials and started braiding like a total boss. Now, Morgese is teaching "Daddy Daughter Hair Factory" classes at a local beauty school, and passing along his pro tips to other single dads in need.

"The idea was brought up when I was talking with my cousin about how to help. I figured a class would be better because we could focus better than having friends coming to the house," Morgese tells Bustle. He adds that doing his daughter's hair gives the pair a common bond "besides video games and chocolate," which is why he's so passionate about it — and about passing that on to other father-daughter duos. "The time spent with Emma while doing her hair is very personal for us," says Morgese.

Sounds like the South Daytona International Academy agreed — soon after the idea for his "Daddy Daughter Hair Factory" class was born, the beauty school offered Morgese a space to hold it. For the first session, seven eager-to-learn dads showed up to practice everything from ponytails to buns to simple braids. "I believe they all wanted to be part of that routine in the morning, but were afraid to ask," says Morgese. "You know how us men are, we will wander lost forever before asking for directions."

After a successful first class, Morgese posted some pictures from the Daddy Daughter Hair Factory on Reddit. It wasn't long before they went viral, getting over two million views in just two days. And based on some of the photos so far, it's easy to see why.

The response from his own local community has also been pretty great — so much so that Morgese will offer classes every other Wednesday, starting Oct. 14. (And oh yeah, moms are welcome, too.) But if you can't make it down to the South Florida beauty school for those sessions, here are some more amazing hair tricks from dads that have recently gone viral. (Hint to Morgese: Next stop, YouTube star?)

OK, so I'm not sure how advisable it is to use a vacuum to do your kid's hair, but here you have it: This video clip of dad doing his daughter's hair with the help of a vacuum hose has inspired a good number of failed attempts that have made their way to YouTube. While I'm not sure it's entirely the best idea, it's still pretty awesome and you definitely have to admire his ingenuity.

This Insanely Creative Approach To The Classic Ballerina Bun

This clip about an easy way to make a bun is probably a safer option for most dads, especially if they have daughters who are awesome at twirling. After the video went viral last year, starring dad Earl Hayes Raglin Jr., the newfound YouTube sensation told Today he's just happy when he makes his daughter happy. "If it’s something she wants to do, I will try my best to do it, and if I can’t, I’ll learn until we get it right," he said.

This Dad, Who Was So Dedicated To Nailing This Hair Styling Thing, He Went To Cosmetology School

Earlier this year, Bill Wickherst went viral for the truly masterful hair creations he would share of his young daughter, Izzy. But the single dad, who now tweets under the handle @CosmetologyDad, has had a shaved head for years, and therefore... well, kinda didn't know what to do with hair of any kind. So on his own, he took himself to beauty school. And man, look at him now.

And This Dad, Who... OK, So He Doesn't Exactly Master The Ponytail, But He Gives It His Best Shot

Although he definitely deserves an A for effort, this clip of one dad trying to tame his daughter's hair is a total (and hilarious) fail. But hey, it did earn him a prize from America's Funniest Home Videos. And now, thanks for Morgese's class, maybe he can learn the key to doing a proper ponytail.