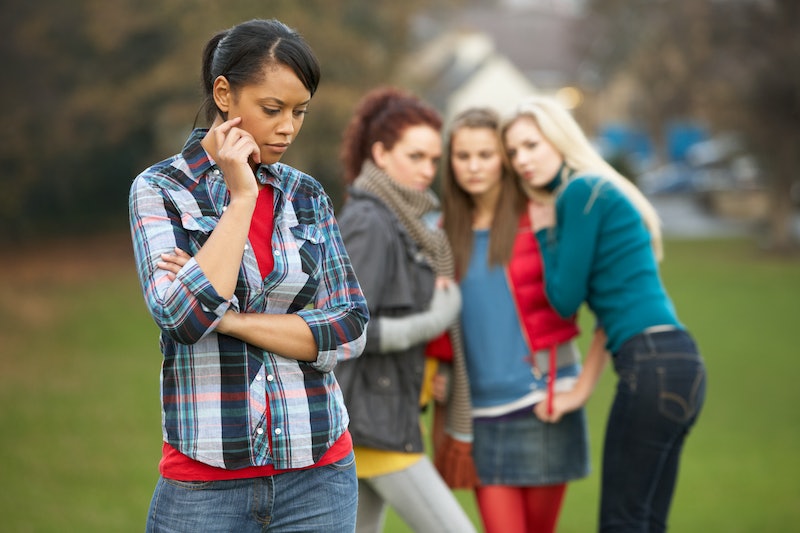 Bullying affects us all, regardless of whether you've been a victim. It affects children and adults alike; especially underserved groups like people of color, the LGBTQ community, and individuals with disabilities. Dr. Mark Hatzenbuehler, associate professor Sociomedical Sciences at Columbia University, says bullying is the result of "a complicated set of social, psychological, and peer impulses." There are multiple ways to bully someone, and each one of them is as harmful as the next.

Although the numbers have decreased in the United States —the rate of bullied kids under 18 dropped to 22 percent in 2013, down from 28 percent over the last decade — we have been confronted with recent data showing how adolescent bullying notably affects the victim's adult life. At least 30 percent of adult depression cases are linked to being bullied, and individuals who have been severely taunted as children are more likely to struggle with obesity and heart disease in their later years. It's safe to say that bullying is a public health issue for our country.

You can help. You could be an "upstander," a person who intervenes in a positive way when they see unfair treatment taking place. Studies conducted at Crimes Against Children Research Center have shown that "57 percent of assertive peer interventions were successful in stopping the bullying episodes within 10 seconds." Scholars also found that victims who had just one person by their side reported lower levels of anxiety and depression, even while they were being persecuted.

A good place to start is by understanding what not to say to an individual who is being intimidated on the daily. Here are six pieces of advice you should probably steer clear of — and what you can say instead.

1. “Just Stand Up For Yourself”

From personal experience, let me tell you what this translates to: "You’re weak, and you’re too scared to step up and deal with this mess on your own." Wrong — for so many reasons. Normal levels of self-esteem are lost when a person is facing persecution, and then they begin to harbor severe shame and guilt about themselves. Suddenly, being confident and assertive doesn't come so easily — how could it be when you don't believe in yourself at all?

Parenting expert and author of Bullied , Carrie Goldman, told Huffington Post that a child's brain chemistry is altered when they are consistently tormented, and this change follows them well into teenage and adult years. They become more sensitive to the smallest of triggers, and they develop anxiety; even a slightly critical comment can make them feel terrified, sort of like post-traumatic stress disorder (PTSD).

So, telling a bullied individual — no matter their age or gender — to simply "stand up for themselves" doesn't help at all. In fact, it will likely make them feel worse.

What To Say Instead: "I'm Here To Support You"

Often times, the sensation of being utterly alone is the most devastating part of being bullied. I remember that distress clearly in my youth; more than anything else, having a loving friend or family member present was most comforting to me.

Having another human being verbally abuse you, whether it’s face-to-face or online, has nothing to do with touchiness, and we shouldn’t automatically assume that an individual who reports being bullied is a delicate, overly sensitive soul. Sadly, there are a lot of people out there, mostly children, who are told to just lighten up in the face of persecution, as if learning to laugh at themselves will solve the problem. There is a stark difference between being teased by your peers and being harassed, and while the former can, in some instances, be handled with a little self-deprecating humor, the latter most definitely cannot.

This way of thinking puts the full burden on the victim, leaving the oppressor with no culpability whatsoever. Moreover, it makes the person who is being consistently badgered feel like they are the ones who need to make a change.

What To Say Instead: "I Think You're Amazing"

Honor the fact that they're hurt, but don't let them start believing in the words the bully says. Build them up and remind them of all the reasons they're generally awesome human beings. Realizing their own magnificence is where true strength can come from.

Being bullied isn’t always something you can counter with force, and even if you do respond with hostility, it might make the whole encounter spiral even more out of control. In most cases, the person being pushed around is at the mercy of a whole group, not just one individual — and it’s not easy to push back when you’re all by yourself. Also, we would do our society some serious good if we stop perpetuating the notion that aggression is the answer. We’ll only keep seeing violent, hurtful behavior if we continue to prescribe it.

In July of this year, a teenager named Gavin Stone from Illinois, who was diagnosed with Asperger’s syndrome and ADHD when he was a young child, was severely beaten by a group of kids he didn’t know. They punched him, choked him, and left him on the sidewalk so he could “learn his lesson” — all because they thought he had weird social skills. Rather than seek out harsh retaliation, he and his family used this terrible affair to raise awareness about bullying. They didn’t even press charges against the aggressors.

While this story is difficult to stomach (and our first instinct might be to give those bullies a beating of their own), we have a lot to learn from Gavin and his family. We're always presented with choices when our backs are against the wall, and it is possible to respond with both strength and compassion.

What To Say Instead: “How Can We Deal With This Together?”

It can be hard to see the bigger picture when you've recently been put down — or physically attacked. Stand beside them and be a solid support. From there, you can work through what the options are for dealing with the situation.

Any expert will tell you that this strategy isn't useful. By keeping your mouth shut, you send a message to the bully that they've won, that they've succeeded in silencing you. Then the power imbalance is reinforced, and nothing is resolved. Anyone who has been bullied, whether at school or in the workplace, will reveal that simply ignoring the situation revs up the intimidator even more, because speechlessness signifies that their behavior is acceptable.

This piece of advice is also harmful because it's an off-hand instruction to bottle up emotions. Keeping negative feelings under wraps has long-term health effects, according to a study conducted at the Harvard School of Public Health; it can cause heart disease and lead to clinical depression and anxiety disorders. A person literally has nothing to gain from attempting to unnaturally shove down the effects of bullying.

What To Say Instead: “Keep A Journal Of Your Experiences”

Instead of encouraging them to bottle up the pain and hurt, suggest they keep a written account of everything. Not only will this be of use when they seek out help from a professional, but it's a great outlet for them to express themselves in a healthy way.

5. “Tattling Will Only Make It Worse”

This one is usually doled out because there is fear that the bullying will worsen if it's publicly outed. Yes, that can happen if it's done incorrectly. The concept of "tattling" is usually centered on bringing negative attention to another person; while I do believe that bullies should be held responsible for their actions, the purpose shouldn't be to humiliate them. Instead, we should shed light on the whole situation and use it as a learning experience for others to understand how detrimental bullying is. That's the difference between "telling" and "tattling."

A 15-year-old high schooler from Huntington, New York, told Women's eNews that all the taunting she endures in school is done behind the teachers' backs. Mean-spirited peers call her cruel names and insist that she doesn't fit in — but only when there is no chance of getting caught. Adults in positions of leadership need to step up and do their part, but we can't expect them to do so unless they are brought into the conversation.

What To Say Instead: "Talk To Someone You Trust"

It's important that bullied students connect with a trustworthy adult. If it's a friend of yours at work who is being pushed around, assist with finding the right HR representative. Breaking the silence will pave the way for forward movement.

Most adolescent bullying takes place in school, in the areas where there is little supervision — the cafeteria, the playground, and crowded hallways. When you hear of bullying in adult life, what's the most popular venue? The office, of course, probably around the water cooler or break room, anywhere the boss isn't hanging around. Trying to dodge these settings isn't a feasible way to handle the incidents, because they won't be able to live their life normally.

For example, every day, 160,000 teenagers skip school in order to evade bullying. By proposing that they avoid the tormentors, we are encouraging school absence and deteriorating the quality of their education. We should instead work with them and their teachers to change the setting of the classroom.

Avoidance is another way of condoning the behavior of bullies; they respond to it in the same way they respond to silence, by puffing themselves up and taunting others even more. It might be harder to step up to the plate and be part of the solution, but your friend who is being bullied will benefit from it in the long run.

What To Say Instead: "You Don't Deserve That Treatment"

You empower the person to play an active role in the bullying when you tell them that they don't have to put up with it. It sounds strange, but they might not realize that they can put a stop to it — it took me years to register the fact that my bullies' actions weren't warranted.