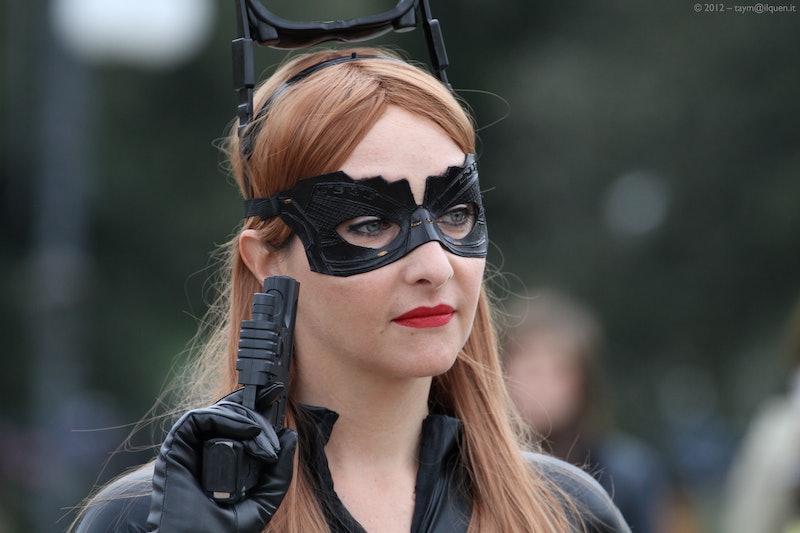 While women who wear even slightly low-cut shirts or short skirts are subject to slut-shaming every day and night of the year, slut-shaming on Halloween is an especially well-documented phenomenon. The protagonist of Mean Girls calls Halloween "the one night a year when a girl can dress like a total slut and no other girls can say anything about it" — and it's sort of true: Women often wear things on Halloween that they wouldn't on most other days. But here's the catch: Even though it's socially more permissible to wear revealing outfits on Halloween, we still don't always "get away" with it — because there's usually someone telling us that our outfit choices reflect a lack of modesty or self-respect, or using our costumes as an excuse to sexually harass us.

I myself have experienced the unintended consequences of participating in "Slut-O-Ween." A few years ago, some friends of mine had a Halloween party the weekend before the holiday, and I decided to wear a tank top, leggings, and high-heeled boots along with cat ears and a tail as a last-minute costume. I probably wouldn't have done this a few years earlier, since I'd been taught that girls who dress "slutty" on any day were "trashy, insecure, and attention-craving." But by then, I was well-versed enough in feminism to understand that it wasn't my problem if anyone interpreted my costume in a way I did not intend.

Contrary to a popular defense against slut-shaming, I was doing it largely for male attention. But so what? The party was hosted by some really great guys I knew, and I rightfully suspected that there would be a lot of other nice guys at the party whom I wanted to notice me. Is that a crime? Nope. And I did meet a lot of great people at the party, and nobody viewed my costume as a sign that I was DTF. To the contrary, several of them invited me to play (and beat) them in chess because — shocker! — sexy cats can also be smart.

But I didn't feel as safe on my walk there as I did after I arrived. Since I was unfamiliar with the neighborhood, it took a bit of wondering around to find the apartment where the party was to be taking place, and since it wasn't actually Halloween night, not a lot of people were around. Several men catcalled me while I walked there, and I was scared someone might try to do more. Someone even tried to coax me into his car. By the time I rang my friends' doorbell, I let out a huge sigh of relief.

Nobody, even those who dress for attention, is asking for that kind of attention when they put on their Halloween costumes. So before you either give unwanted attention to someone in a revealing costume or blame them if they receive such harassment, consider these reasons why you shouldn't slut-shame anyone on Halloween — or any other day of the year, for that matter.

There are a thousand reasons someone might choose a revealing costume other than to look "sexy." Maybe someone just wanted to be a cat and found that, not surprisingly, there weren't many non-sexy cat costumes. Or maybe they live in a warm climate where revealing clothing is more comfortable. Maybe they're dressing as a character who wore sexy clothing and want to be as true to that character as possible. Maybe they're wearing a revealing costume simply because they can, and it's liberating to do something they're not "allowed" to do on most nights of the year. Or maybe they just liked the costume and weren't thinking about how revealing it was in the first place.

2. And Even If They Are Trying To Look Sexy, It's Not Always For Other People

Some people may dress in sexy Halloween costumes for the same reasons they wear sexy underwear or pajamas that nobody else typically sees: They just like what they see in the mirror and want to feel like they're giving their body the adornment it deserves, the same way you might decorate a room nobody else uses.

3. And Even When It Is For Other People, It's Not Always To Gain Sexual Attention

In a culture that associates women's worth with their attractiveness to others, how could women not want to look attractive to others? Who doesn't want people to find them attractive? However, this desire is often more about approval and appreciation from people of all genders than it is about spurring men (or whatever gender we're attracted to) to make a move.

4. And So What If It Is For Sexual Attention?

Some people, like me, do wear sexy Halloween costumes because they're hoping to hook up or get a date that night. So what? That doesn't mean they're okay with being sexually harassed. There is a big difference between someone striking up a conversation with you because they think you look hot and someone catcalling, groping, or following you. Plus, even though some people might wear sexy Halloween costumes to be noticed in a sexual or romantic way, you don't know who is and isn't a part of this group — so it's safest not to make any assumptions. No matter what someone puts on or takes off, their personal bubble is still around them.