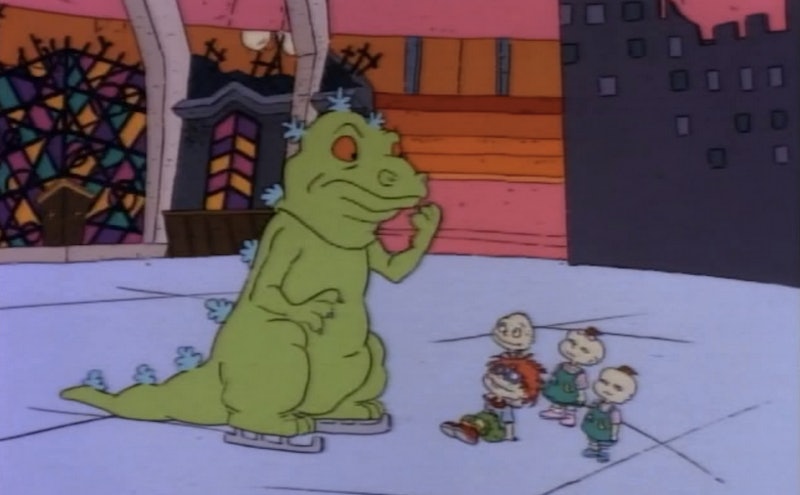 Nickelodeon's The Splat has enthralled viewers hoping to get a second chance of watching '90s television in real time. Its first week of shows ran under the theme "First Time For Everything" and included classics like Hey Arnold! and Doug, to lesser known shows like Roundhouse and Weinerville. However, the following week The Splat has something big planned — something massive — so run for your lives and hold on to your sippy cups because the week of October 12 marks the start of the Reptar Week schedule on The Splat. Everyone's favorite large green lizard is getting a week-long showcase during which The Splat will air all the best Rugrats episodes revolving around the great, green terror that is Reptar.

Don't worry if you're looking forward to other shows and are not a fan of the great green lizard (although honestly, how could you not be?). The Splat will still be airing classic '90s Nickelodeon television during the week, but will give a special nightly showcase to all things Reptar. Fortunately, Reptar is a very flexible, so no two episodes featuring the dinosaur are similar! So pour yourself a bowl of Reptar cereal, sit yourself in front of the nearest Splat-friendly screen, and look forward to these Reptar episodes.

The Rugrats didn't always deal with serious issues, but in this episode they tackle the fictional ailment of "cereal addiction," which plagues a man dressed as Reptar at the local fair. This wouldn't be the last time that the kids would be disappointed by a man in a Reptar outfit, and it's wasn't the first time that cereal played a big part in a Reptar story.

They're round. They're mean. They turn milk Green. Reptar cereal instantly catches Tommy Pickles' eye and leads him on a path of destruction in the local supermarket, trying to get his hands on this sweet, sugary cereal. (Although, green milk sounds like the least appetizing part of any balanced breakfast.)

Aside from opening up a conversation about the ethics behind a Dinosaur-Woman romance (Rugrats was ahead of the curve on that), "Reptar On Ice" is also a quintessential "don't meet your heroes" story. It's like meeting your favorite musician only to find out that they're only human, much like the Rugrats discover Reptar is only a human in a dinosaur outfit on an ice skating rink.

Most television shows get weirder the longer they go on, but watching the Rugrats fly into a Reptar movie via their imagination is still pretty odd. Even if it's all made up, the Rugrats still manage to team up and take down the MechaReptar that Angelica built. If that's not an impressive display of teamwork and friendship, I don't know what is.

If you're looking for these, and other Reptar episodes to get your green dinosaur fix, tune into The Splat during the week of October 12.