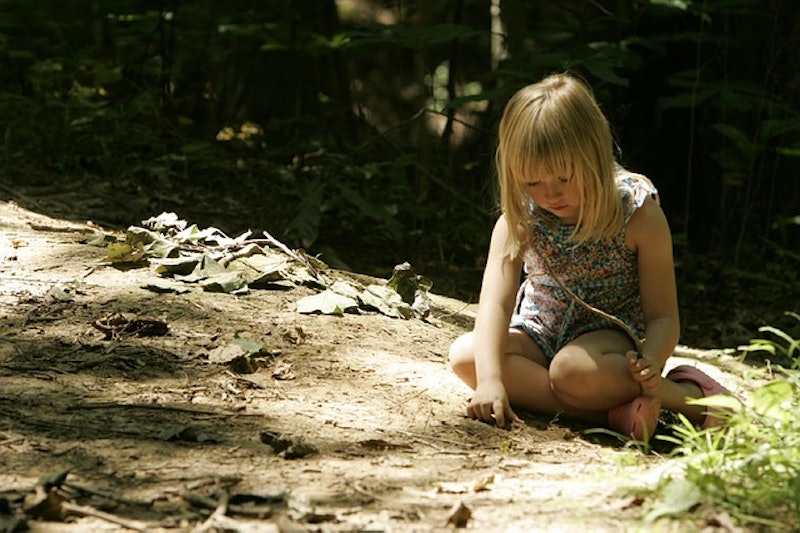 What is scary about a lot of the subtle, harmful relationship dynamics between men and women is that they are ingrained in us at an age so young we can hardly remember it. Take, for instance, this hospital employee who allegedly told a little girl that the boy who beat her up must "like her." The four-year-old girl of Columbus, Ohio, was taken to Nationwide Children's Hospital after an encounter with a boy at her school. In the photo, there is a cut below her eye that had since stopped bleeding, as well as a bruise around her eye. Her mother, Merritt Smith, was imaginably already incredibly distressed to have her young daughter hurt in such a way. It is arguable, however, that what the hospital employee said to them at the front desk hurt even more.

"I bet he likes you." That's what Smith says that the man at the registration desk told them when they arrived to seek treatment. She acknowledges in the Facebook post, which has since gone viral, that the man probably thought the comment was harmless and was just trying to lighten the mood — and then she goes on to explain that that is exactly why it was such a dangerous comment to make.

Dear man at the registration desk at Nationwide Children's hospital, l'm positive that you didn't think that statement through. As soon as I heard it I knew that is where it begins. That statement is where the idea that hurting is flirting begins to set a tone for what is acceptable behavior. My four year old knows "That's not how we show we like someone. That was not a good choice."

In that moment, hurt and in a new place, worried about perhaps getting a shot or stitches you were a person we needed to help us and your words of comfort conveyed a message that someone who likes you might hurt you. No. I will not allow that message to be ok. I will not allow it to be louder than "That's not how we show we like each other." At that desk you are in a position of influence, whether you realize it or not. You thought you were making the moment lighter. It is time to take responsibility for the messages we as a society give our children. Do Not tell my 4 year old who needs stitches from a boy at school hitting her "I bet he likes you." NO.

The only positive thing we can take away from this encounter is that in immediately shutting it down and sharing it, Smith has helped bring yet another pervasive and damaging cultural norm out into the spotlight. It's not enough to be aware of the patterns of abuse — it is necessary to find the root of it, acknowledge it openly like Smith did, and then make steps to change it. Props to Smith, for reacting the way we hope every parent would, and stopping this kind of dangerous everyday sexism at the source.

More like this
34 Quotes That'll Inspire You On Juneteenth & Beyond
By Syeda Khaula Saad and Siena Gagliano
How To Fight For Reproductive Rights, Based On How Much Time You Have
By Courtney Young
What Is A “Softboy?” The TikTok Term & Aesthetic, Explained
By Courtney Young
Why Are TikTokers Slapping Each Other With Tortillas?
By Courtney Young
Get Even More From Bustle — Sign Up For The Newsletter