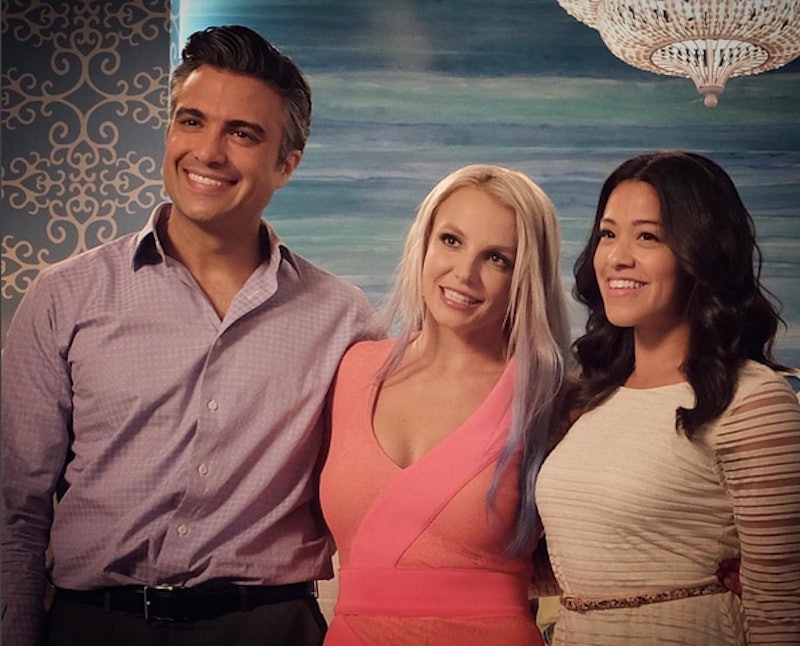 "It's Britney, b*tch," better be a line that comes out of Rogelio's mouth when Britney Spears guest stars on Jane the Virgin Season 2. Yep, you read that correctly. One of the biggest names in pop music is appearing on the critically-acclaimed series. But Spears isn't the only famous guest star to be on Jane the Virgin Season 2. As if the show needed any help from huge guest stars (hint: it does not), expect to see some really big names joining the cast on the sophomore season of the show. And prepare for Rogelio to get majorly jeal.

After a incredible first season, Jane the Virgin returns with a lot of questions to answer. First of all, what's going on with Mateo? Will he be returned safely to his family? Also, will Jane choose Rafael or Michael or neither? All of these questions deserve answers, and I'm sure in due time we'll get them. (We better get them.) But until then, we might as well bask in the guest stars for the second season of Jane the Virgin. The original Jane the Virgin cast is amazing. With Golden Globe winner Gina Rodriguez at the helm, and a bevy of talented actors surrounding her, the following guest stars are purely icing on the already delicious cake of Jane the Virgin.

Here's the roundup of who will be coming to Jane the Virgin Season 2.

Rogelio's "nemesis" is joining the show to tell her side of the story about their feud. She'll be playing herself — obviously — and I can already tell that this "feud" is going to join the ranks of Meek Mill and Drake or Miley and Nikki.

Yes. Another pop star is coming to Jane the Virgin, but she's not playing herself. Kesha will actually be playing Annabelle, a rocker who moves next door to Jane. I'm thinking a rocker and a newborn baby don't mix well...

Adam Rodriguez — fresh off of Magic Mike XXL, thank you very much — will be playing "Jane's very strict writing professor, Jonathan," according to Latin Times. I know he's playing Jane's teacher, but how great would these two look together as a couple?

Finally, Kate del Castillo joins Jane the Virgin Season 2. The actress was welcomed to the show by Jaime Camil (Rogelio) by a photo that suggests he and del Castillo will be acting opposite each other. Can't wait. Del Castillo is a very successful actress who has appeared in shows like La Mentira, La Reina del Sur, and Weeds.

I can't wait to see how these huge stars join the cast and ruffle the feathers of our favorite stars.