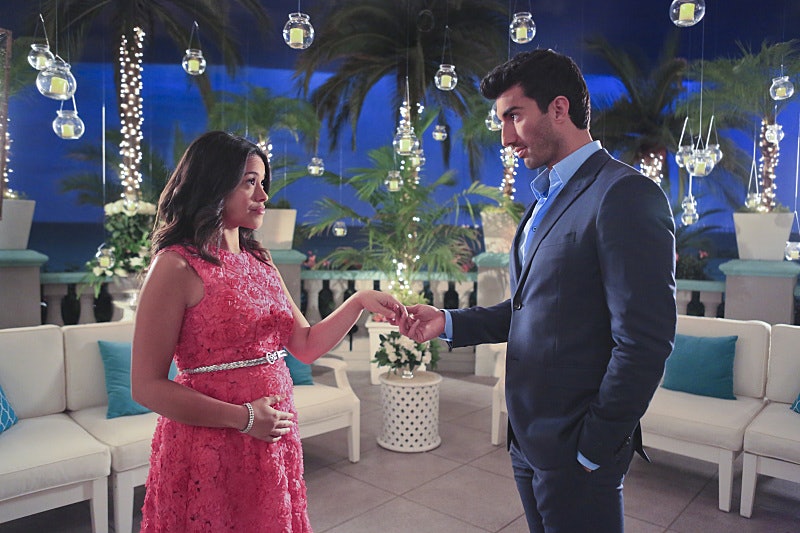 What on earth are we all going to do during the Jane the Virgin hiatus? What are we going to do without our weekly doses of love triangle goodness, bloody impalings, and multi-generational family drama? At least fans can rest easy on the anxiety front, since Jane the Virgin was renewed for Season 2 way back in January. So despite all of the pesky cliffhangers that are sure to be coming our way, at least we know our questions will be answered someday (unless showrunner Jennie Snyder Urman pulls a Lost on us — though I don't think that's her game). So when exactly will Jane The Virgin return for Season 2? Details are fuzzy. When Will claimed that Jane will be back in October 2015, but didn't cite a source, and no one from The CW has confirmed a premiere date yet. That said, I think October is a fair guess — after all, Jane will be back for a full season once more, and its first season premiered on Oct. 13. [UPDATE: The CW has announced that Jane The Virgin will premiere on Oct. 12]

Lucky as we may be to be getting Jane the Virgin back again, it's still going to be a heckuva wait. Here are a handful of (mostly) female-driven, seriously feel-good shows to help you fill the void in your heart while you brave the long, barren months until late fall.

Ugly Betty and Jane the Virgin are both based off of telenovelas, executive-produced by Ben Silverman, and star Golden Globe-winning stars. Oh, and perhaps most importantly of all, they both feature a scene where a beloved mother gets pushed down the stairs. So in a nutshell? Watch it.

If you like female-driven dramedies with lots of great love triangles (TEAM JESS FOREVER) and a kickass mother-daughter relationship at its core, this one's a no-brainer.

Arguably one of the leaders of the whole rom-com revolution of television, New Girl is another feel-good show that appeals to the mushy-hearted among us, and it's good for some belly laughs as well (especially Season 2).

The Mindy Project is another fun TV rom-com (cross your fingers that Hulu will pick it up for a fourth season!), and if you can't get enough of all the Rafael/Jane drama, you're going to absolutely love the slow burn of Mindy/Danny.

This may sound like a stretch (could the Villanuevas possibly be any less like the Bluths?), but here's what they have in common: A sassy narrator. While Jane the Virgin has Anthony Mendez, Arrested Development had Ron Howard — and both helped the story along in very charming (and innovative) fashion.

In its most recent season, Arrested Development even brought Ron Howard on as an onscreen character. Will Jane the Virgin do the same when it finally returns for Season 2? Let's hope so!