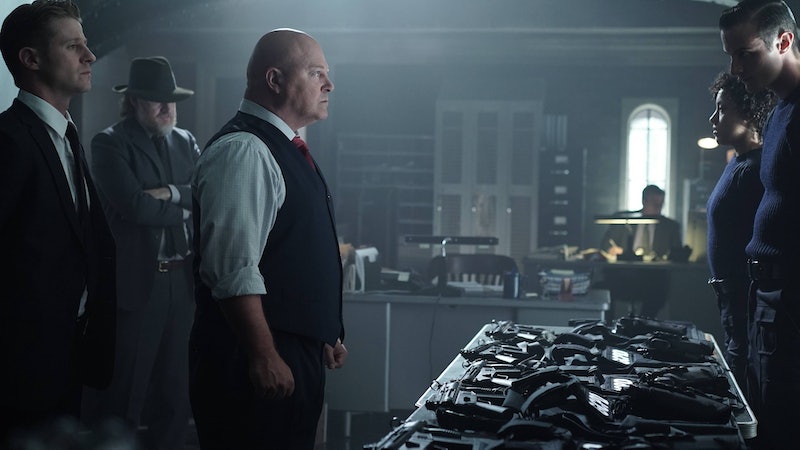 As fans know, shows like Gotham, The Flash, and Arrow don't restrict themselves to closely following their DC Comics origins, which can be both excellent and frustrating. On one hand, it lets viewers be surprised by the TV version od characters and how their storylines evolve in fresh new ways. But on the other, it makes things very hard to predict, and sometimes leads to confusion. We'll have to see where on that scale Strike Force falls when Gotham airs its new episode on Monday night. I'm already curious about what Strike Force is on Gotham, because in the comics, that name belongs to a rather villainous organization, which doesn't seem to be the case here. At least, not yet.

According to the synopsis for the episode, which is actually titled "Strike Force," we'll finally get our big introduction to GCPD's new Captain Nathaniel Barnes. His goal is to create a new "law-abiding task" force with Gordon's help. If the group is truly aiming to do good in Gotham, then it is most certainly not the same villainous "Strike Force" from the DC Comics universe... Unless it evolves in a sinister direction over the course of Gotham Season 2.

In the DC universe, Strike Force is usually described as a team of mercenaries or metahumans that were originally banded together by the evil ruler Kobra (thus its more well known name Strike Force Kobra) to commit all kinds of terrorist actions. They were first introduced in the DC Universe when they attempted to break in and commit theft at Stagg Enterprises, created by the billionaire Simon Stagg (whom you may remember from an episode of The Flash). The Strike Force has been disbanded and recreated by other supervillains in recent years, but the most well known is probably the original created by Kobra.

So what does that mean for this episode and the rest of Gotham Season 2? The task force under Barnes' rule will probably remain on the side of good for a while, but I wouldn't be surprised if they go to the dark side thanks to Theo Galavan. He certainly has enough money and resources to entice anyone to do his bidding. Even with this new, more forceful direction being taken by the GCPD, I have a feeling things are only going to get worse for Jim Gordon this season.