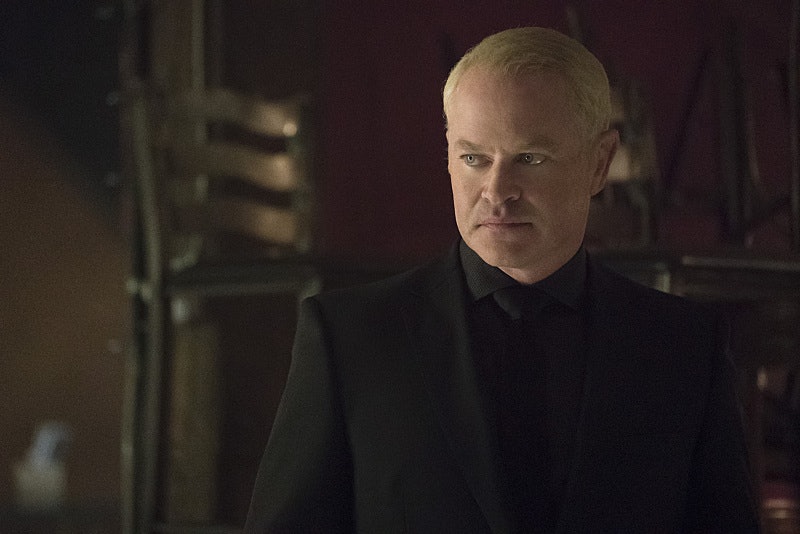 After the destruction of his entire city by Malcolm Merlyn, the death of his best friend, the insanity that was Ra's al Ghul, and Slade freaking Wilson, you would think Oliver Queen and his team have seen just about enough enemies in Starling City. Alas, even after Oliver and Felicity drove off into the sunset to start a new, stable life together, the city called him back. Now Oliver must face quite possibly his hardest opponent yet in Arrow Season 4: Damien Darhk. By the show's standards, Darhk may not seem all that intimidating at first. He's simply a well-dressed blonde man with lots and lots of money. But when Oliver and Damien fought for the first time in the Season 4 premiere, we saw that Damien was able to stop Oliver's arrows from hitting him in mid-air, almost as if he had telekinetic powers. But is that that case? Does Damien Darhk have powers of some kind?

Often it's the villains who seem totally normal who can be the most formidable. Think about Sebastian Blood from Season 3, or new Gotham foe Theo Galavan. Sure, Slade Wilson was a gigantic monster of a man who could crush people with his palms if he wanted to, and Ra's had the entire weight of the League of Assassins behind him, in addition to his own fighting skills. But neither of them could play the villain quite like Damien, even when he's doing nothing but talking. What's not clear is just how much more Oliver has to fear about his new enemy.

Unlike many DC villains, Damien doesn't have any outwardly obvious "powers" in the comics. He's not a metahuman like the many we see traipsing around Central City while The Flash attempts to take them down one by one. Instead, what Darhk has are resources and the intelligence to know how to use them to his best advantage.

That's Darhk's biggest "power," if that's what you want to call it. He has an undeniably high level of intelligence, not only on Arrow, but also in the DC Comics universe. He is the man who was able to create an entire organization (H.I.V.E., aka the Hierarchy of International Vengeance and Extermination) of assassins and hitmen that are hellbent on destroying a city for Darhk's own personal gain. This man is more than just smart, he is resourceful, ruthless, and willing to use all of that in any way he possibly can to achieve his sinister goals.

And let's not forget that Damien Darhk was in fact once part of the League of Assassins. For those who may not remember the above scene from Arrow Season 3, Ra's al Ghul tells Oliver that he and Damien were actually in the League together and rose up the ranks at the same time, which means he probably also has immense fighting skills. Ra's and Darhk were both up for taking the Ra's name from their predecessor and Ra's had to kill Damien. However, when Ra's hesitated, Damien found a way to escape.

From there, Damien was clearly able to find power and build his own army with H.I.V.E., proving that he was not only a worthy adversary to Ra's, but quite possibly even more intelligent and violent. Escape Ra's and becoming an even greater adversary than Ra's himself is a feat that no ordinary man could achieve. So then how did Damien stop Oliver's arrows? Since DC Comics don't give him any supernatural abilities and Arrow has yet to explain what we saw last week, my theory is that Damien uses some kind of magnetizing device that makes it appear as if he's telekinetic. Between his intelligence and money, he likely has access to tons of gadgets that even Felicity doesn't know about and can make him seem like a mystical being.

Not having any special powers wouldn't limit Darhk in any way. He's just as formidable without them, perhaps even more so. He's the villain who can make even Quentin Lance join the other side. While Arrow could still reveal that Damien is a metahuman or has some other kind of powers, I hope it doesn't. He doesn't need anything extra to be an extremely dangerous enemy for Oliver this season.