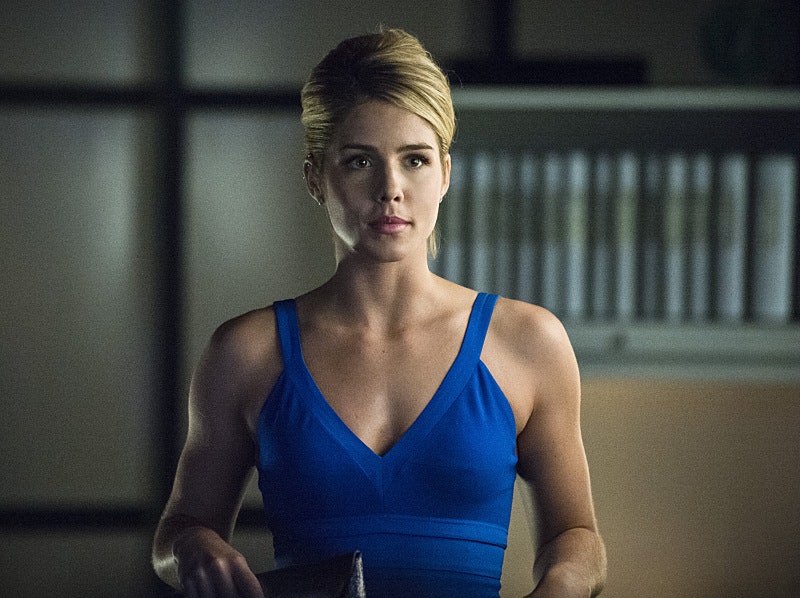 I like to think of myself as a smart, trusting person. One that doesn't usually jump to an immediate, rash conclusion because I have let the seductive duo of fear and anxiety grab the keys and drive the ol' noggin. But I'm going to admit, the flash forward scene in the Arrow season premiere, you know, the grave scene, was a test to my will, and it continues to be one. Listen, I know that it probably isn't Felicity in that grave. Yet even still, that ambiguous cemetery exchange between Oliver and Barry was an especially cruel and unusual form of punishment after basking in all of the Olicity love. Arrow writers, I'm going to say this and I am only going to say it once: Don't you dare Matthew Crawley me and kill off Felicity Smoak.

For those of you who may not get the reference, Matthew Crawley was Lady Mary's star-crossed love interest on Downton Abbey, played by the adorable and talented Dan Stevens. As you can guess by the resentment seeping through my words, things — spoiler! — didn't end so well for him. And, by "didn't end well," I mean that the writers killed the beloved character in a horrific car accident directly after meeting his newborn son. And then they just casually ended the season. Like it was no big deal. So, yeah, you can imagine that I am just a wee bit weary over a similar fate befalling Felicity. Especially, as Entertainment Weekly relays via show runners (and possible life ruiners) Wendy Mericle and Marc Guggenheim, the death is for reals. I refuse to believe it, though — here's why Felicity can't be dead.

1. They Don't Have To Pull A Matthew Crawley

The thing is, it wasn't completely the Downton Abbey writers' fault. Stevens wanted to leave, and as the Telegraph explains, the writers wanted to keep his departure true to the character. Now, I don't know if Emily Bett Rickards wants to pull a Stevens or not, but even if she did, the writer's don't have to kill her in the same way the Downton staff killed Crawley. Arrow doesn't face the "based strictly in reality" problem that Downton had. Sure, The Green Arrow may not have superpowers, but Star City residents are kidnapped on the regular and readily return from the dead. There is an endless list of scenarios that they could pull to leave room for Rickards to eventually return if she wanted to. Why make hers the death that is permanent?

Felicity gives Oliver (and The Green Arrow) something to look forward to. Remember, he didn't want to return to Star City. Felicity did. She said it gave her life purpose to fight crime nightly. He was resigning himself to weekend farmer's market shopping, because his first go round with the hero thing didn't go so hot. Also, as Felicity would say, in terms of non-platonic circumstances... *pushes Moira's engagement ring towards you* *Sits you down and replays the brunch scene implying possible Olicity children* *Pats your back*

3. Oliver Has Filled His Tragedy Quota

*Cries into the camera with mascara tears running down my horrified face* LEAVE. OLIVER. ALONE! As I have seen it be constantly lamented on Tumblr and social media sites alike (I feel you guys), Oliver Queen has gone to storyline Costco and purchased the romantic, familial, and platonic variety pack of tragedy. It's enough. There is nothing interesting about seeing him go through all of that again. Not only is it repetitive, but it doesn't progress the story further. Not saying that no one has to die, but the person Oliver wants to marry? At this point, it just seems cruel.

4. Felicity Smoak Is Not The Cherry On Top Of Arrow, But The Glue That Holds It Together

That's right, friends. Felicity isn't a sweet garnish to make the rest of the Arrow dreariness just a bit more palatable. She is the very reason Arrow can maintain its dark nature at all. She brings balance. As David Ramsey, who plays Diggle, so eloquently put it to Variety ,

"...Arrow can become very brooding and dark very quickly. I always joke that thank god Felicity came in the first season so it wasn’t just Diggle and Oliver hanging around the Foundry brooding — you need some of that lightness..."

5. Which, Brings Me To This Point: Wouldn't It Just Be Kinda Boring Without Her?

Not only is Felicity "light," she's funny. She's fallible. She gets herself into wild conundrums with her rambling mouth, but she's also the team's unsuspecting secret weapon. She's their (and the show's) ace.

6. Olicity, Popularity Is Thy Name

How's this for good measure? I knew about Olicity before I even knew about Arrow itself. It's a phenomenon. As TV Line pointed out in its assessment of possible character deaths, "What percentage of the series' 2.6 million viewers are "Olicity" fans?" It's an excellent question, and the answer is: a whole bunch.

7. There's Too Much Character Potential

I have a laundry list of things that I need Felicity to still do to make me feel satisfied as a viewer. You know what? I'll list them. In no particular order, here are just a few of the things l need to see her do:

*Shrugs* *Sips tea* But, that's just my two cents. If you want an epically awesome dose of reassurance though, I urge you to read this amazing theorization on Tumblr by JBuffyAngel on why Felicity isn't dying and why other characters may be dead instead.