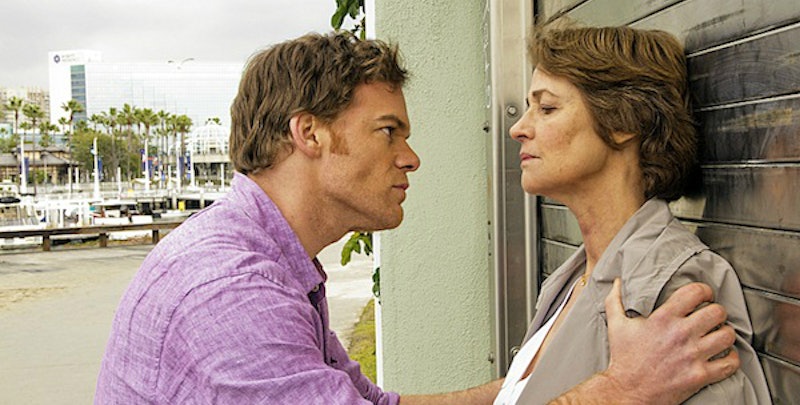 For those of us who've stuck around in Dexter Morgan's Miami for seven seasons, the question of just how much all that sun is getting to the detective's brains is inescapable. Yes, at the beginning, Dexter's narrow escapes came at the hands of close shaves, serendipitous coincidences, and ingenious plot twists, but keeping the goody-two-shoes serial killer train going for seven seasons isn't easy, and eventually you start to wonder why these cops keep missing obvious signs. Never has that thought been more prevalent than in the season premiere of Dexter's eighth and final season, "A Beautiful Day." Luckily, the writers have a most convenient, season-plaguing remedy for that problem: Dr. Evelyn Vogel, a.k.a. the Psychopath Whisperer.

After Deb made the impossible decision to shoot LaGuerta instead of Dexter at the end of last season, La Guerta's murder is all but swept under the rug. She's gone, the Department is mourning her, Batista is wondering what to do with her endless boxes of useless warrants and colorful clothing, and all she's got to show for it is a plain, cement bench on a stretch of beach where loose trash roams freely. There's no lengthy inquest into her demise, fueled by anger or loss. We're just supposed to assume that because Dexter started his frame job, in which he attempted to make it look like LaGuerta and Estrada killed each other, that LaGuerta's fake fate was obvious to investigators, but that had to have been marred when Deb used her own weapon from the opposite side of the room to kill LaGuerta. It's all a little too convenient.

What's worse is that Deb, who had a famously contentious relationship with LaGuerta and whose brother was publicly accused by LaGuerta, disappears immediately following the woman's death and a department of detectives emits a collective sigh of apathy. It's just how she deals with things... even though they weren't close. Right. It's absurd that not a single brain in that building would suspect some foul play, especially when Dexter practically breaks out into a grunt-laden rendition of "Cell Block Tango" when Batista gives him LaGuerta's vase to remember her by. Why do we constantly have to operate under the assumption that accusing these our protagonist would be so outlandish for his coworkers? Isn't that the point? That Dexter's life is dangerous because he's hiding in plain sight? It's no longer so scary when we figure out the people whose sights he's in are completely blind.

That's why, for Dexter's final ride with the dark passenger, the writers had to bring in the really big, British, fancypants guns. When regular detectives fail to see what's right in front of their noses, the Chief enlists a ringer and that's where Dr. Vogel comes in. Her official title is Neuro-Psychologist, and her trade is understanding the minds of psychopaths. The fact that Dexter thought for most of an entire episode that he could escape this woman is a testament to his conditioning: he's been coaxed into such bravado about his abilities to safely walk on the outskirts of reality that he thinks he can outsmart a woman whose life work is understanding the inner workings of a brain just like his. It's why he was bold enough to take out LaGuerta and why he was blind enough to think it was okay to bring Harrison with him to Deb's druggie motel when he attempts to rescue her Andrew Briggs, her doped up thief of a boyfriend/target. He's escaped certain destruction enough that he, like the series' viewers, just know he'll get out of it. But the buck has to stop somewhere, and it stops with the only person over-educated enough to suss Dex out.

Vogel starts right at the core of Dexter's complex: he still believes his code separates him from other serial killers. Even after he broke that code for LaGuerta, Dexter is able to return to coaching Harrison's soccer team and doing normal dad things because LaGuerta stood in the way of his execution of the code. It's his rules that allowed us to enter Dexter's world without running away in terror, but they won't save him from Vogel. She reads him like a book and immediately knows that the supposed Bay Harbor Butcher, Doakes, didn't the fit the profile of a serial killer — something that only the Miami PD couldn't seem to understand (see, again: Dexter's dumb cop problem). Doakes was too angry on the surface, flailing about at any given moment — "Surprise, Motherf**ker" isn't exactly the trademark of a methodical killer like Dexter. Vogel points this out and then takes aim at the almighty code.

While Dex's code punishes bad guys, she argues that it doesn't separate him from other psychopaths and that most psychopaths have belief systems that "emerge." All this time, we've been happy thinking of Dexter has a serial killer with a code, without assigning him the soul-crushing moniker: psychopath. Deb choosing him over LaGuerta placated us, but Vogel changes all that for good. She says that the code cannot come from empathy, because the Bay Harbor Butcher was a psychopath; the code had to come from somewhere darker.

We're given a long overdue dose of reality when Vogel approaches Dexter on LaGuerta's bench with a folder of his childhood drawings in which he's murdering stick figures and one that even seems to depict his signature bloody body wrapped in cellophane. She's got him cornered, and like LaGuerta, she needs to be put down if he's going to come out of this alright. But has he thrusts her up against a building, she simply responds like the average family shrink when little Jimmy screams "I hate you." Vogel calmly says that Dexter can't kill her because "it doesn't fit Harry's code."

Vogel's got Dexter's number and she's cleaning up the mess that fell through everyone else's fingers. After seven seasons, Dex might finally be looking at his own demise — of course, he's the only one looking because the rest of the Department is still as clueless as ever.