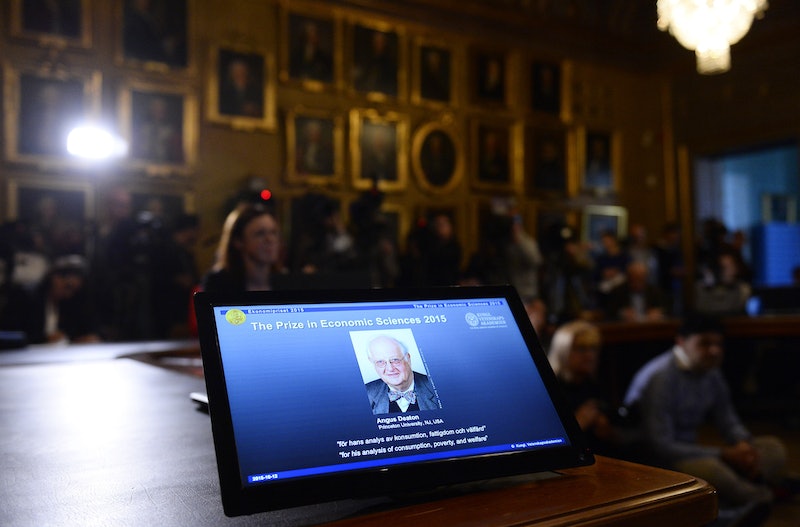 On Monday, the Nobel Prize Committee awarded Angus Deaton the Nobel Prize in Economic Sciences for "his analysis of consumption, poverty, and welfare." The full name of the prize is the Sveriges Riksbank Prize in Economic Sciences in Memory of Alfred Nobel; it is the youngest Nobel honor, having been established in 1968. Deaton, 69, researches health, wellbeing, and economic development at Princeton University, according to his university bio, and has won 8 million Swedish kronor (approximately $970,000).

Deaton, a Briton, has long studied how consumption and income are connected and whether public policy can correct economic inequalities. He's best known for his 2008 paper "Income, Health, and Well-Being around the World: Evidence from the Gallup World Poll," and his book The Great Escape: Health, Wealth, And The Origins Of Inequality was published last year. Of Deaton, the Swedish and Norwegian committee said:

To design economic policy that promotes welfare and reduces poverty, we must first understand individual consumption choices. More than anyone else, Angus Deaton has enhanced this understanding.

By linking detailed individual choices and aggregate outcomes, his research has helped transform the fields of microeconomics, macroeconomics, and development economics.

Last year's winner was Frenchman Jean Tirole for analyzing market power and regulation. The New York Times reports that more than 80 percent of the economics prize winners have been American, and only one woman, Elinor Ostrom, has ever been awarded the distinction.

More like this
How 5 People Upended Their Lives To Fight For Abortion Rights
By Hannah Smothers
How To Support Gun Control Reform Right Now
By Morgan Brinlee and Carolyn Steber
How To Fight For Reproductive Rights, Based On How Much Time You Have
By Courtney Young
Boris Johnson’s Leadership Is In Question – Again
By Bustle UK
Get Even More From Bustle — Sign Up For The Newsletter