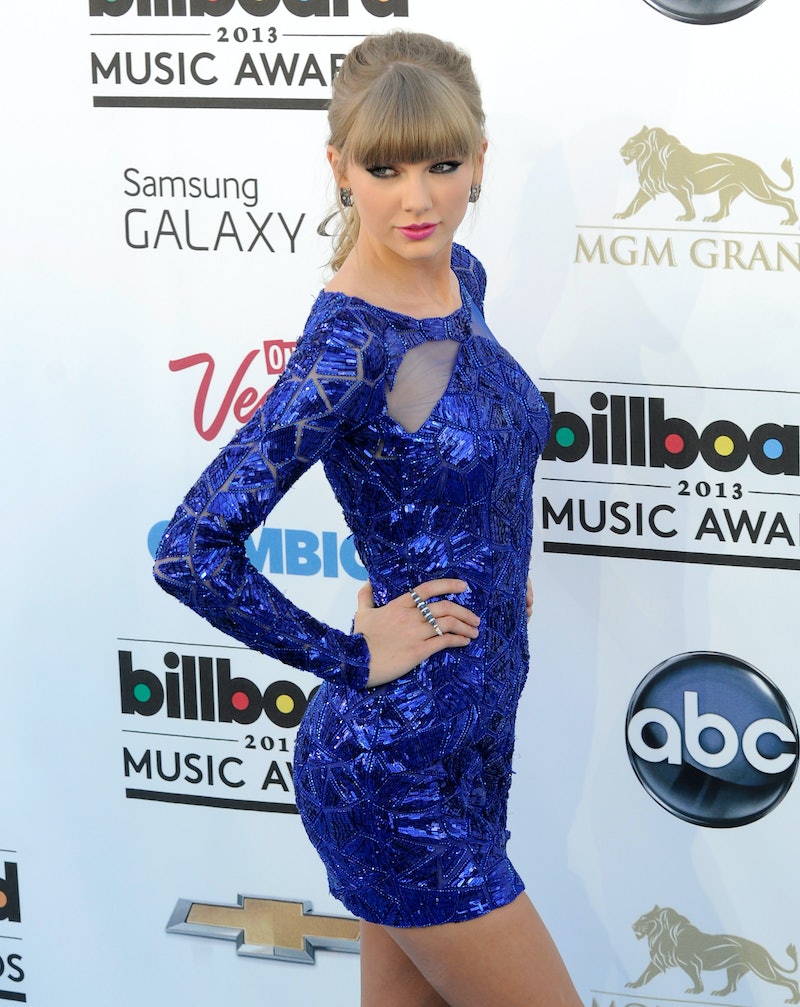 Style is often cyclical, especially when it comes to celeb hair. What's old is new again, as Taylor Swift covered Vogue Australia and rocked bangs, as she has in the past. The singer had ditched her heavy, straight bangs when she chopped her hair, often rocking sideswept fringe instead. But her razor-y bangs on the Aussie edition of the fashion bible remind us of the time she actually cut bangs into her hair for her U.S. Vogue cover.

America's Sweetheart, who is also covering the new issue of NME with purple lips and a graphic jacket, went with an overall thick, shaggy, and shoulder-skimming 'do for the Vogue AU cover, which is the mag's November 2015 issue. The hairstyle is Swift's take on boho chic and the honey hue looked amazing on her.

Swift was the ultimate in glamsual (glamorous + casual) on this cover, seated on the floor while draped in a gorgeous, airy, sheer, and sky blue dress. It's Schiaparelli haute couture and the frock floated around the singer's body.

The singer and captain of the most famous girl squad also went with the minimal makeup look for this cover, rocking soft, nude lips and hardly any eye makeup. She was just lovely. But when isn't she?

The cover look was soft, romantic, and approachable. It also showed a bit of leg. The bangs were the perfect match for her texture and choppy cut.

Her February 2012 Vogue cover was much the same, with heavy bangs that had a little bit of wispiness in the center. Swift's hair was longer, more layered, and more golden at the time. She also gave off a Stevie Nicks x '70s vibe. But the heavy bangs remain one of Swift's best coif moves.

Swift's March 2015 Vogue cover, a nod she shared with her bestie Karlie Kloss, found her rocking supremely sideswept hair. It was a more grownup look for her; it actually had a '90s, ultra layered vibe.

Her British Vogue cover from November 2014 —her first for this edition— also rendered T. Swizzle unrecognizable. The pastel color palette and the wet, swept back hair was quite an '80s presentation for her. Perhaps it was a literal manifestation of 1989.

Her August 2011 Teen Vogue cover was all about her big, bouncy, and untamed curls, which we haven't seen in ages. The red lips and flowing, brushed out hair had a Botticellian vibe.

Swift's March 2009 Teen Vogue cover was all about the statement necklace, minimal makeup, and soft, golden waves. The blue top brought out the gray in her eyes. She looks so young!

All of Swift's Vogue covers have one thing in common and that's memorable hair. Each cover coif is unique unto itself. My favorite is the February 2012 U.S. Vogue cover. The long layers and heavy fringe remain classic and enduring.