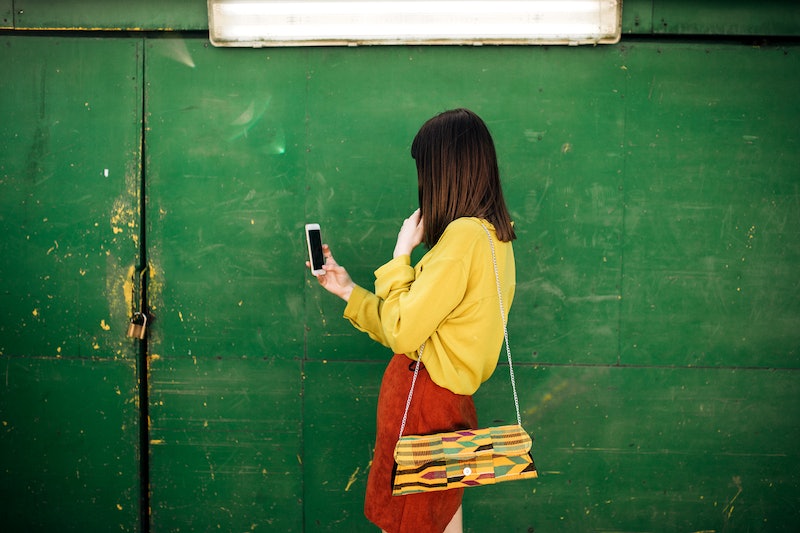 Any woman with a large online presence can tell you that the attention garnered by her blog posts, photos, videos, or whatever she shares is a double-edged sword, and Mia Matsumiya's @Perv_Magnet Instagram shows exactly why. Matsumiya, a violinist from LA, began the Instagram account in response to the horrifying amount of extremely NSFW messages she's recieved online. The goal? To call out this kind of behavior and the people who exhibit it. Because seriously: It is never OK to ask a complete stranger if you can touch her "pushshe."

Matsumiya toldThe Huffington Post that she sees the worst of the harassment women on social media and online dating sites face on a daily basis:

Being 4'9", Asian-American, and a musical performer has sort of been a nightmare combination when it comes to harassment — it seems to attract an insane amount of unacceptable, predatory behavior... It had gotten to the point where someone would send the most scathing, racist, violent thing to me — like rape or death threats — and I would barely have a reaction.

I hear ya, Mia. Though I cannot imagine what it's like to be a target of racism as well as sexism from trolls, I am no longer even phased by emails telling me "You've got to be one of the dumbest bitches out there" or tweets reading "Thank God natural selection won't let you reproduce" (both actual messages I've recieved). While seeing other women receive the same harassment makes me angry about the magnitude of the problem, it also reminds me that trolling has nothing to do with who I am or even what I've written (and actually, given the non-specificity of their comments, most of my trolls probably have never read a single article of mine). Being a woman on the Internet is the only criterion that qualifies us for these hateful, disturbing, or imposing messages we've all gotten.

Here are eight kinds of harassment every woman on the Internet has received, as illustrated by @Perv_Magnet. Head on over to Instagram for more, although proceed with caution: It's beyond NSFW. Consider yourselves warned.

1. The Message Describing A Sexual Act You Would Prefer Not To Think About

Women of color are especially prone to harassment, with people classifying them according to racial stereotypes and giving fetishizing "compliments." And they're not always from men — the message above was from a woman. For the record, Matsumiya isn't even from Japan.

Just... wow. Some people don't disguise their racism with compliments. They'll just tell you how they really feel. Racism is alive and well, people.

No, sexual harassment apologists, these are not compliments. This letter has little to do with the recipient — the sender does not even know her — and everything to do with his psychological need to dump his word vomit anywhere he can.

5. The Nonsensical String Of Words

As to what these people are trying to say, anyone's guess is as good as mine.

6. The Unwelcome Request For Advice

Whether it's fashion, sex, or some other topic nobody can speak about on behalf of all women, some men are just desperate for "a female's" opinion.

7. The Confession That Should Probably Not Be Shared

I don't even know what to make of the rest of this one, but it definitely should have stopped before "Hitler."

8. The Proposal Of Marriage

Some online trolls are too serious for sexual harassment — they want to skip straight to marriage and "give [us] ALL."

Check out more face-palm-worthy messages on the Instagram @perv_magnet. But I can't be held liable for any loss of faith in humanity you experience as a result.