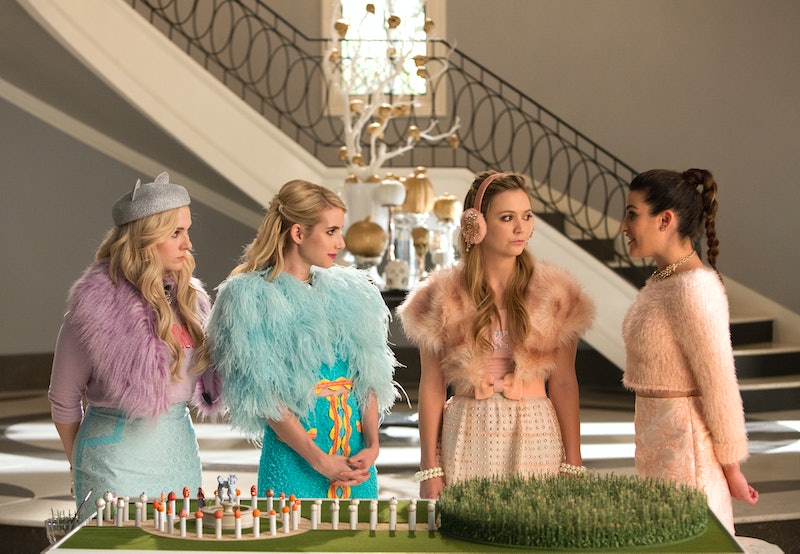 Brutal chainsaw massacres… an unsolved baby mystery… epic pop culture references — that's everything fans have come to expect from Ryan Murphy's latest horror-comedy creation, Scream Queens . Sure, this show may be somewhat insane on many different levels, but it's so self aware of its own insanity that it's actually boarding on genius territory. This series wants to be ridiculous, and in doing so, it's become Fall TV's newest obsession. Viewers everywhere are already quoting Scream Queens ' lines on a daily basis and Red Devil theories have started piling up just as high as all of the dead bodies. (Which, as many of you already know, is a pretty impressive feat.)

But just like with any addiction, some people's cravings are stronger than others. So, in order to test your Scream Queens know-how, I've concocted a little experiment for die-hard watchers to take a "stab" at. (Sorry, guys, but I had to.) By now we're all fully aware that one of the show's greatest strengths lies within its epic one-liners. So as a way to help test your killer knowledge of these quotes, I've taken the liberty of writing them out in emoji form. The only question is — can you name the popular quote just by looking at its emoji translation? Test your Kappa House instincts below and see if you have what it takes to be a true member.

Kappa Clue: That animal is a donkey, FYI, which serves as a vital piece of information regarding this particular line (delivered by Chanel).

Kappa Clue: This quickly became one of the most popular phrases from the show before it even premiered. Hopefully that will re"fresh" your memory.

Answer: "What fresh hell is this?"

Kappa Clue: Think about who recently suffered at the hand of knife.

Answer: "Shandell, why you gotta knife through your throat?"

Kappa Clue: This one may be a little more difficult just due to the lack of proper emoji choices, but think back to one of the meanest Chanel lines so far. And don't think of the last image as a fish so much as what the fish is on… a hook.

Kappa Clue: Focus on the magnifying glass. Who normally uses such a device (think Sherlock) and what do they use it for?

Kappa Clue: What do those stream of tears look like? Does it remind you of a certain song?

Kappa Clue: This is an interaction had between Chad and Chanel. It didn't end well.

Answer: "Sorry, I just broke up with you, bye."

Now all you have to do is add up your score and whoever received 5 or higher gets to… oh, who am I kidding? Everyone is allowed to join Kappa House these days. Congrats! (Just try to avoid chainsaws at all costs.)