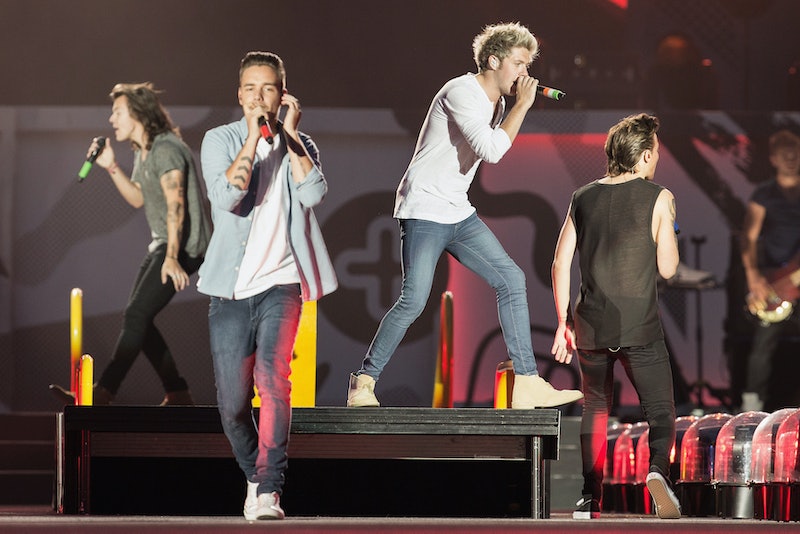 It's a big week for Directioners: One Direction's new song, "Perfect," reportedly premieres on Friday. "Perfect" serves as the official second single from 1D's upcoming new album, Made in the A.M. (due out No. 13). The project's lead offering, "Drag Me Down," debuted in July, and a promotional track called "Infinity" arrived in September. The guys — Harry Styles, Liam Payne, Niall Horan, and Louis Tomlinson — unveiled the "Perfect" cover artwork last week, but they haven't released a preview just yet. Consequently, fans are dying to know: What will "Perfect" sound like?

One Direction moved away from teen pop on their third LP, Midnight Memories, and began experimenting with a more mature modern rock sound. With the help of songwriters and producers Julian Bunetta and John Ryan, they've continued down the modern rock path. However, the group worked with a few talented new collaborators on "Perfect," which makes its sound difficult to predict. Personally, I think that's exciting! For me, 1D's recent material is a bit... uninspired. Though "Drag Me Down" peaked at No. 3 on the Billboard Hot 100 chart — the band's second best peak to date — it hasn't fared nearly as well at radio, which suggests that it hasn't won over the general public. I think the quartet would be wise to try out something different.

Kasher has written songs for a lot of big acts over the years, including Britney Spears ("Inside Out"), Nicki Minaj ("Get On Your Knees"), Maroon 5 ("Sugar"), Fifth Harmony ("BO$$"), Jason Derulo ("Wiggle"), Carly Rae Jepsen ("I Really Like You"), and Avril Lavigne ("Rock N Roll"). Maroon 5's "Sugar" is one of his biggest hits, but Lavigne's "Rock N Roll" is a personal favorite of mine.

You may not know her name, but you definitely know her work: McDonald co-wrote Miley Cyrus' "Wrecking Ball." Since then, she's penned tracks for pop music icon Madonna ("Hold Tight") and newcomer Mary Lambert ("Secrets"). Not too shabby, right? (McDonald did co-write "Fool's Gold" for 1D in 2014, but it's just one measly song, so she still qualifies as a "new collaborator" in my book.)

As I'm sure you can tell by listening to the songs above, Shatkin, Kasher, and McDonald are three very different musicians. It'll be interesting to hear how their styles came together on "Perfect." Hopefully, One Direction will take mercy on their fans and release a snippet of the song before Friday. I'll keep my fingers crossed.