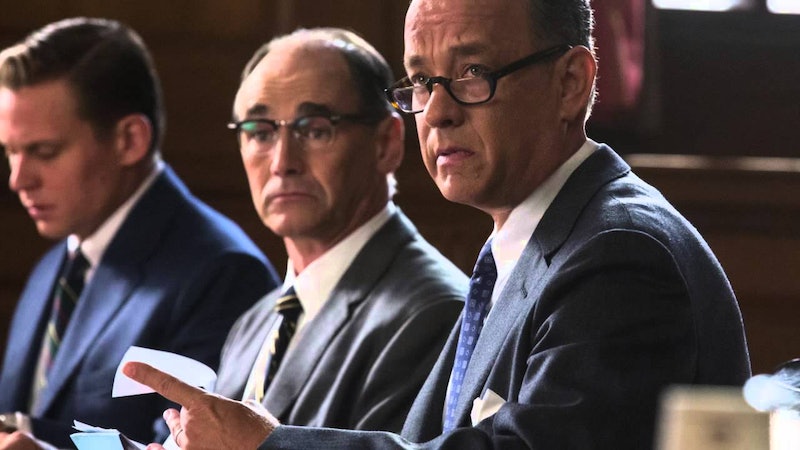 Another summer blockbuster season is in the books, and the prestige picture season has begun. Fall and early winter are the best months to be a movie awards buff, since distributors save their films that they want to catch voters’ interest — like the Oct. 16 release Bridge of Spies — for the end of the calendar year. Tom Hanks stars in the Cold War courtroom drama, and his performance is already generating Oscar buzz. The promotional circus of nomination campaigns has just begun for 2015, but there's already hints that Tom Hanks could win an Oscar for the role, or at least earn a nomination.

Not that he needs another Oscar to know how film history will remember him. Hanks already has two golden statues, one for Forrest Gump and one for Philadelphia. He also has four Golden Globes, several Emmys for his producing work, some MTV Movie Awards, a handful of American Comedy Awards, a Kennedy Center honor, and so much more. No one can claim with any authority that Tom Hanks is hurting for recognition. But if his work in this film moves Academy members to check his name, who am I to argue? He’s Tom friggin’ Hanks!

Still not convinced? These are the six strongest reasons why Tom Hanks will probably get another Oscar nomination for Bridge of Spies.

I know. But it bears repeating. Tom Hanks is as close as any American actor has come to being a mutually agreed upon national treasure. Show me someone who doesn't love Tom Hanks, and I'll show you someone with a shriveled heart and no concept of actual talent.

2. That Other Guy Is Steven Spielberg

The visionary director's career includes some embarrassing lows, but they're outnumbered by the soaring highs. It's his willingness to take chances and exercise his imagination that lead to these extremes, so anyone who champions risk-taking in film can't complain. (Too much.) The man is an institution in the industry, and while his name doesn't guarantee a nod, it certainly helps.

3. The Coen Brothers Had A Hand In The Script

The Coen Brothers have screenplay Oscars for No Country For Old Men and Fargo, and if millions of cult movie fans had their say, they'd have one for The Big Lebowski as well. They took a pass at screenwriter Matt Charman's initial script for Bridge of Spies, and the final product is called "crackling" in the Variety review of the film. It's pretty tough to win an Oscar delivering crappy material.

4. It's An Old-Fashioned, Grown-Up Movie

The A.V. Club calls Bridge of Spies "one of the most handsome movies of Spielberg’s latter-day phase, and possibly the most eloquent." With no alien robots or choreographed dance numbers in sight, Bridge Of Spies is the kind of serious drama about duty, bravery, and what it really means to be an American that the Academy eats up with a spoon.

Most of the action in Bridge Of Spies is legal action, but it still deals with the pervasive paranoia created by the Cold War. Wars in general inspire a lot of award season action for the movies that feature them, simply because of the themes and scope that can be explored there.

6. It's Based On Real Events

Rudolf Abel (played by Mark Rylance in the film) was an actual Soviet spy who lived and worked in New York City in the years after World War II. And that real spy had a real lawyer: Hanks's character James B. Donovan. Voters also gravitate towards biographical films, giving Hanks and Bridge Of Spies another leg up in the race.

Tom Hanks always has a good chance of hearing his name on Oscar nominations morning (even in the years he doesn't open a movie — he's that magic), but Bridge of Spies will give him an extra edge.

More like this
9 Photos Of Margot Robbie & Ryan Gosling As Rollerblading Barbie & Ken
By Alyssa Lapid
The 'Hocus Pocus' Sequel Finally Has A Release Date & It Makes Total Sense
By Shannon Barbour and Radhika Menon
Is Austin Butler Really Singing in 'Elvis'?
By Arya Roshanian
What’s New On Netflix: 'Stranger Things' & 'Mean Girls'
By Arya Roshanian
Get Even More From Bustle — Sign Up For The Newsletter