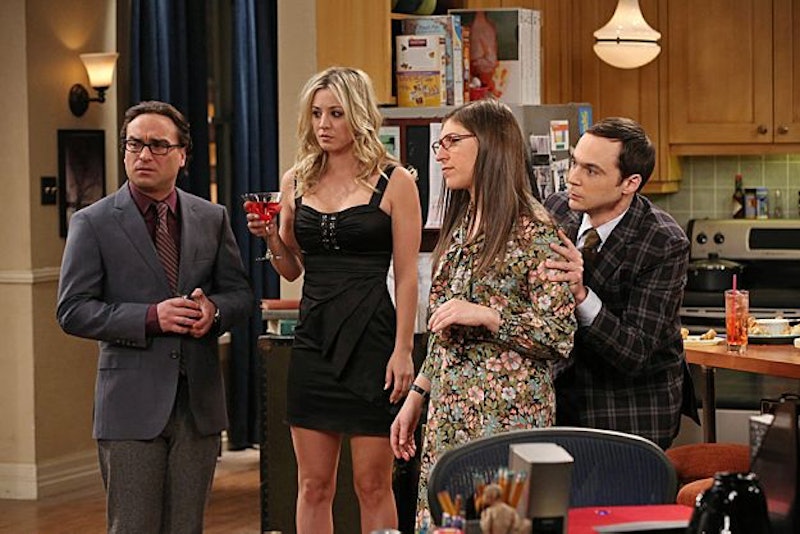 When Bustle was looking for someone to defend the Golden Globe-nominated and much-maligned CBS juggernaut The Big Bang Theory, I volunteered. Like Katniss Everdeen into the Hunger Games arena, I prepared to do what no one else wanted to do. And truthfully, I didn't think of it as a big sacrifice. I'm just going to put it out there on the Internet: Though fans of more beloved (and snubbed) comedies like It's Always Sunny or Arrested Development are grumbling under their breaths about its nomination, I like The Big Bang Theory. I've seen almost every episode and when my family visited me in Los Angeles, we all geeked out together on the Warner Brother's studio tour when we got to see the soundstage, even though the series wasn't currently in production. My dad and I even wore BBT shirts. We were that midwestern tourist family.

In fact, The Big Bang Theory is part of a tradition in my family. Every year, my dad gets the latest season on DVD for Christmas, and, every year, we marathon it together over Christmas morning muffins and bursts of laughter. So, this year, when we began the annual marathon session, I watched with a new gaze, a critical gaze. I've always known that most people in my particular demographic aren't fans of the show, but I've never cared to examine why. This year, I watched with the intention of proving them wrong. I learned a lot about the series and myself.

I'll start with the thing I learned about myself, since it's of the least interest. We'll just get it out of the way: I am a slave to nostalgia and tradition. It's not that I dislike The Big Bang Theory. I don't, really. But I will admit that I've overlooked some of its greater offenses and downfalls because, well, it's tradition to love it. It's tradition to watch it, not over the course of nine months, but over a few days when during the one time of the year I actually set foot inside my childhood home. The Big Bang Theory has come to represent more to me than a sitcom. So be it, at least now you know my biases.

Now, for those offenses and downfalls I mentioned. Watching The Big Bang Theory with anything approaching a critical eye revealed a lot about the series I'd been rather willfully ignoring. It has moments of atrocious racism and sexism. The jokes have, after six seasons, started to stale and recycle themselves and the characters are dumbing down in order to set up the new jokes, which don't live up to the old ones anyway. This is a pretty standard set of complaints for a CBS sitcom (hello 2 Broke Girls and How I Met Your Mother ). But, this article is not about criticizing The Big Bang Theory. If you're looking for that, just Google the series and you should find plenty on the subject. This is, as promised, a defense of The Big Bang Theory: So here goes. This is why the Golden Globe-nominated series deserves its nod... and your respect.

While I stand by my assertion that the writing has, on the whole, suffered since Season 1 (at least in terms of pure laughs on the jokes), the series has made leaps and bounds in recent seasons with the addition of two new characters: Bernadette and Amy Farrah Fowler. While Penny, the initial lone lady in the cast, was never able to keep up with the guys intellectually and often came across as the living punchline of a dumb blonde joke, Bernadette and Amy are actually smarter than the guys most of the time. True, they were added to the cast as significant others for the series' inept men, but they've grown a lot from there. In particular, Bernadette might just be one of the most feminist characters on television today. When she and resident would-be playboy Howard get engaged, she puts her foot down about everything from living with his mother to the idea of having children at all. After an argument during which Howard reveals that not having children might be a dealbreaker for him, Bernadette comes up with this incredible compromise (which is even more incredible to hear articulated on CBS):

Try not to love her. I dare you.

Penny and Leonard have always been The Big Bang Theory's Ross and Rachel. He falls for her in episode one and they try dating only to break up and sometimes kind-of-almost makeup over and over again. It's tiring, but that's the nature of TV love. Unlike Howard and Bernadette or even Sheldon and Amy, Leonard and Penny (Lenny? Can we start calling them that? I'm not a big enough fan to know if that's already a thing) can never just be happily ever after – at least not until the show is nearing the end of its run (which could be soon). One nice thing about the Penny/Leonard relationship, however, is that even in its current on-again state, it's not picturesque. They have problems and they aren't cute non-problems or contrived sitcom problems. They have issues like Penny's inability to say "I love you" and Leonard's nagging (but understandable) insecurities. It makes it all the more rewarding when they overcome some of their issues and grow as characters, just as we grow in our own relationships. Yes, our love life doesn't come complete with a laugh track, but it's easy to identify with Leonard and Penny's courtship.

It's Got Jim Parsons

Say what you will about The Big Bang Theory. Point out its flaws and shortcomings all you like. Pout when Charlie Day doesn't get the recognition he deserves (or insert your favorite underdog here). But Jim Parsons really does own his character and steal every scene that he's in, more than earning his three Emmy wins. Maybe that's my nostalgia and Midwestern non-taste talking, but I'm always game for a classic Sheldon Cooper bazinga. So give Big Bang Theory a chance, and see if you feel the same. I promise you'll warm up to it like it's a soft kitty. And if you don't? Well...