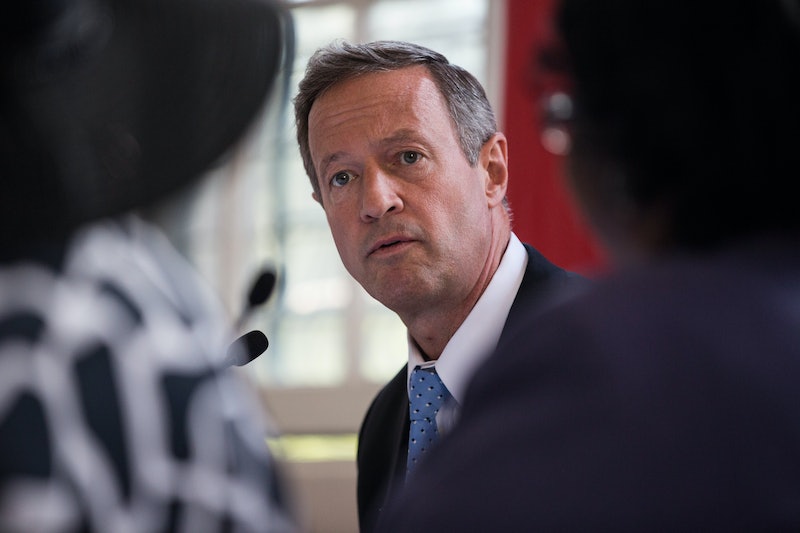 Martin O’Malley has a lot weighing on him going into Tuesday night’s first Democratic presidential primary debate. His tragically low poll numbers and the fact that his star was dwarfed right out of the gate by Democratic rivals Bernie Sanders and Hillary Clinton have given the former Maryland governor plenty of reason to reconsider his 2016 White House bid. However, it’s O’Malley’s history with the Black Lives Matter movement that has stirred up the most trouble for the beleaguered candidate in recent months. And at Tuesday’s debate, it may just prove to be the fatal tipping point that sets the course for the remainder of his campaign — however long that may be.

Painting himself as “a more progressive alternative to [frontrunner] Hillary Clinton,” as The Washington Post’s John Wagner put it Sunday, O’Malley suffered an unexpected early blow when Sanders suddenly began rising in the polls instead, commanding enormous crowds and capturing at least some part of the media’s watchful eye. Then in mid-July, things for O’Malley went from bad to worse.

At a Netroots Nation gathering on July 18, O’Malley was interrupted during his speech to the largely white, progressive activist crowd when a group of Black Lives Matter protesters marched into the room, chanting “What side are you on black people, what side are you on” as they made their way to the stage.

One of the group’s leaders, a woman named Tia Oso, then took control of the microphone and turned to O’Malley, saying,

We are going to hold this space and acknowledge the names of black women who have died in police custody, and then Governor O’Malley we do have questions for you. As leader of this country will you advance an agenda that will dismantle structural racism in this country?

Some contended that the slip-up was a sign that O’Malley didn’t quite understand the point of the movement. “It is true that all lives matter, but it is equally true that not all lives are understood to matter, which is precisely why it is most important to name the lives that have not mattered, and are struggling to matter in the way they deserve,” said University of California, Berkley philosopher Judith Butler in an interview with CNN that same day. “If we jump too quickly to the universal formulation, 'all lives matter,' then we miss the fact that black people have not yet been included in the idea of 'all lives.’”

For his part, O’Malley later apologized for the gaffe, telling digital news program This Week in Blackness that he had “meant no disrespect,” and that he did not intend to “communicate that [he] did not understand the tremendous passion, commitment and feeling and depth of feeling that all … should be attaching to this issue.” Despite his apology, however, the candidate’s issues with the black community extended far beyond the scope of a single incident.

O’Malley, who served as the mayor of Baltimore from 1999 to 2007, has previously been criticized for playing a pivotal role in the rise in police brutality within the city over the past decade, with many attributing the problems to O’Malley’s “zero tolerance” policing throughout the early 2000s. Subscribing to and promoting the “broken windows” policy, O’Malley and his colleagues began cracking down on petty crime in order to prevent more serious issues from overtaking relatively quiet neighborhoods.

“We had a horrible problem in our city with the proliferation of open air drug markets,” O’Malley told Think Progress in an interview following his speech at the New Hampshire Democratic Party Convention in September. “People wanted them shut down, so that’s what we did — yes, enforcement levels spiked, but we saved about 1,000 lives, probably.”

Still, as the publication pointed out, O’Malley’s tenure was pockmarked with contentious decisions, such as the implementation of mass incarceration — which later sowed rampant distrust between the black community, which was heavily hit during the crackdown, and the city’s police. That distrust came to a head just this past April, after black civilian Freddie Gray died of injuries he sustained during a questionable arrest by Baltimore police. All of the officers involved with Gray’s arrest were later charged on various counts of manslaughter, reckless endangerment, and false imprisonment.

“[O’Malley’s] philosophy [as Baltimore mayor] was, ‘Put them in jail and figure it out later,’ and that will solve the crime problem,” said Baltimore Lawyer A. Dwight Pettit, who has represented a large number of civilians in police brutality cases, in an interview with The Washington Post this past April following Gray’s death. “It created a confrontational mentality with the police.”

In recent weeks, O’Malley has largely kept himself out of the spotlight — at least on more controversial matters. But with a shortlist of Democratic contenders jockeying for a win on Tuesday night, it’s possible that O’Malley’s shaky history with the black community might remain difficult to shake.

Luckily for the former Maryland governor, O’Malley has at least one strong point to argue going into the first big Democratic showing this week: his comprehensive criminal justice reform plan. Focusing on repairing the trust between communities and law enforcement, as well as tamping down on overly-aggressive policing and opening up greater access to the justice system for all, O’Malley’s plan has at least a handful of well-constructed ideas that could keep him afloat, should the conversation steer in that direction on Tuesday.

“The question for African Americans voters is quite clear,” explained NBC’s Jason Johnson in an op-ed on Monday. “What is Martin O'Malley's real plan for criminal justice reform, the new rhetoric he's used during the campaign or the 20 years of policy he showed in Maryland?”

As long as O’Malley avoids the latter and owns up to his perceived mistakes without treading into non-apology territory, there’s a good chance the Democratic underdog could still come out of Tuesday’s debate unscathed.