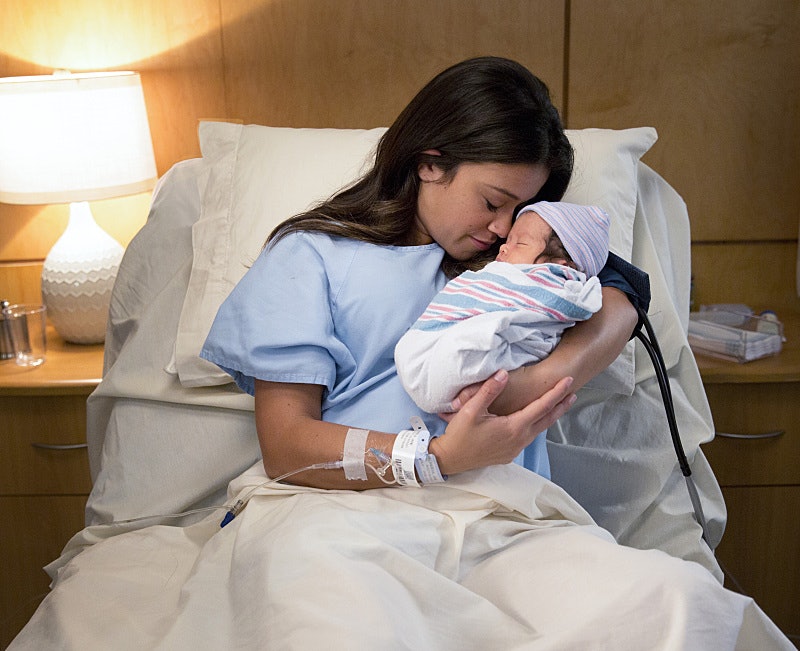 Fans were left with quite the cliffhanger last season when Jane's newborn baby boy Mateo was kidnapped by Sin Rosetro just moments after being born. But luckily, the Jane the Virgin Season 2 premiere wasted no time in rescuing Mateo and returning him safely back to Jane and Rafael. It turns out that the only reason Sin Rosetro took the baby in the first place was because she needed the leverage in order to get what she really wanted: the dragonfly broach that Luisa stole from her last season. Apparently, this particular piece of jewelry was much more than any ordinary fashion accessory. It was also secretly hiding a computer chip inside, which contained the faces and identities of all the major crime bosses Sin Rosetro has changed throughout the years.

So yeah, in other words, it was pretty much everything Michael has been looking for since he started working on the case. But none of that mattered now that Mateo's safety was on the line. So being the amazing guy (and clear choice for Jane, in my opinion) that is he, Michael followed Sin Rosetro's instructions to the letter — evening telling her to have Nadine ditch her phone tracking device — and traded the dragonfly broach for Mateo, even though it meant his career was taking a major blow. Seriously, guys, Michael is the only sane choice at this point, right?

And just like that, Mateo was reunited with his family. But as adorable as their family reunion was, I fear that our Sin Rosetro problem is far from over. And I'm worried that it's only a matter of time until the police discover everything Michael let slip through his fingers in order for it to happen. Let's just hope that he'll get another opportunity to bring this Big Bad down. But if she has no problem with kidnapping a newborn, you can't help but wonder what her next move could be.